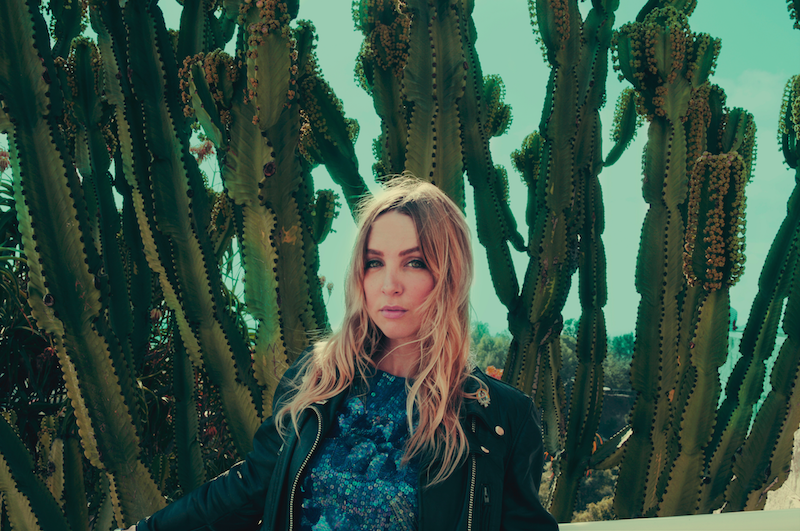 In the big, wild world of modern music—presently so overcrowded with equal parts would-be artists and sub-genres—it is often the truly talented that are buried and easily overlooked. Dig past those in it for a quick cash grab or notoriety, and you will find the passionate artists: the poets, the dreamers and the musician’s musicians—those who live and breathe their music. Here’s the deal: Laura Burhenn is the real thing. With her poet’s heart firmly intact, her latest offering as The Mynabirds, the much-anticipated Lovers Know, is something of a small miracle: an accessible, highly memorable sing-along declaration. While she was preparing to present her diverse third album to the world, SLUG had the pleasure of speaking with her about the new record and upcoming tour.

Taking sabbaticals to join Bright Eyes and The Postal Service on their world tours, Burhenn intentionally fashioned Lovers Know to play like a great road album, a departure from her debut, the confessional What We Lose In The Fire We Gain In The Flood and its political follow-up, Generals. “There was something I really missed about just driving,” she says. “There’s something that’s so cathartic about it. After the Postal Service tour, I got in my car and drove across the U.S. twice, just kind of writing and figuring out what I was trying to say, what words I wanted to say next.”

Pure pop (“Semantics,” “One Foot”) and heartbreakingly beautiful ballads (“Velveteen,” “Hanged Man”) highlight the proceedings, but most interesting is when Burhenn experiments, like on the enthralling “Shake Your Head Yes,” which recalls an In The Garden–era Eurythmics and where she sounds like she’s having serious fun with her vocals. “I think with ‘Shake Your Head Yes,’ it was the sonic conversation with myself,” she says. “It was definitely all the voices in my head kinda talking over each other. But I think that that was ultimately—that’s kind of the key to the whole record, you know? The record’s called Lovers Know, and to me, that’s a reference of this sort of secret language that we all speak, but it’s not spoken in words, necessarily.”

“Say Something” contains the lyric “I put our records on and play every song / Don’t you remember how we got here,” in which she rhetorically speaks to an apparition of her former love and, in the process, elevates her songcraft to a new height of revelational skill. “I imagine, for every record, I’ve tried to reinvent myself, follow the trail of different artists that have inspired me and my life,” she says. While this isn’t the happily-ever-after type of love song, it is one of many tracks with the theme of everyone’s ubiquitous search for love. What makes it and the others so special is their unique sing-along qualities. Speaking of these songs, Burhenn elaborates: “It’s the universal struggle, and so I wanted them to be songs that people could sing along with, because as much as they’re my songs, I think they’re everyone’s songs,” she says.

After initially connecting via Instagram to collaborate on a cover of Leonard Cohen’s “Suzanne,” producer Bradley Hanan Carter (Black English, formerly of NO) eventually won Burhenn’s trust by offering to record some demos. “I’ve never worked so hard on anything in my life,” Burhenn says. “[Carter’s] a perfectionist, and I’m sort of prone to being like, ‘Let’s just throw it—oh wait, it’s on tape! Great, we’ve got the song!’ So we really pushed each other, I think, to get the perfect recording, which I’ve never done. It was nice for this record to say, ‘OK, let’s pay attention to every space, to every note, and make sure that everything that’s on there matters and creates the emotional sensation that it should.’”

After touring and recording around the world, the ultimate destination of Burhenn’s road record is home. “When I was living in Omaha, I finally felt free to be able to tour and really, really live my life as a musician,” she says. “And I also felt this real responsibility to bring something back to my family and my community there. I think every [touring] musician struggles with that—kind of being thrown back into your real life once you get back from the road: Are you making people proud? Are you bringing people back something that’s worthwhile, and are you doing that for yourself? And you feel—it’s such a contrast—because you feel this amazing connection with people all over the world that you’ve met and you’ve interacted with and you’ve had these brief, fleeting, deep connections with at shows or coffee shops, wherever you are on the road, and then you come home, and then you also feel so incredibly far away from the people you should feel closest to. It’s a weird re-entry, like astronauts must feel a little like that coming back from space.”

Burhenn’s sincere affinity for performing in Utah comes to fruition for a fourth time when she returns to Kilby Court on Sept 14. “It’s going to be really great to be back in Salt Lake,” Burhenn says. “I love it there and can’t wait to see you and everybody else!”