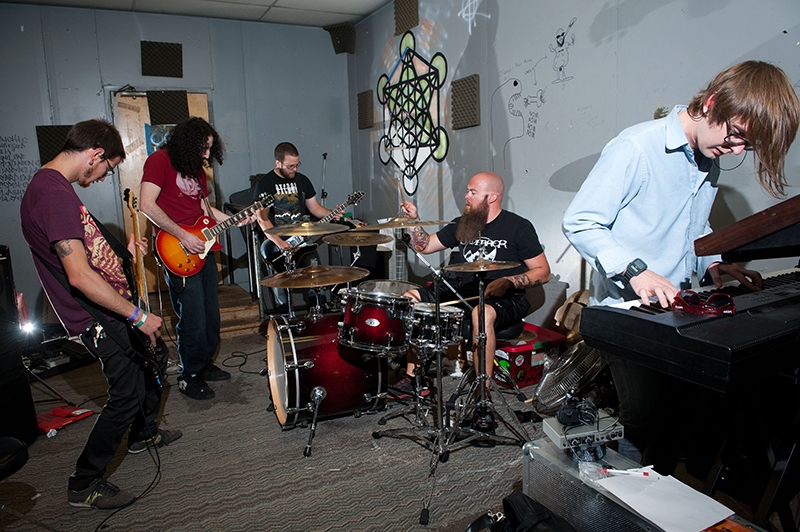 The Tide Will Swallow And Consume Us All: A Conversation with Huldra

The ocean is a thing of immense beauty. It is calming, massive and gentle, but at any given moment, it can become violent and unpredictable. The ocean is terrifying, so it is no wonder why the ocean is such a staple in so many forms of art. It seems especially tailor-made for the sprawling and intense nature of post-metal. For their second full-length album, and fourth release overall, Huldra have turned their eyes to the ocean—using it to channel emotions of loss and grief, filtered through the spectrum of a man lost at sea. In the weeks leading up to the album’s release on Oct. 11, SLUG met up with the local post-metal group to discuss their upcoming album, Black Tides.

Featuring a consistent lineup since their inception in 2009 of guitarists Eric Smith and Levi Hanna, bassist Matt Brotherton, drummer Chris Garrido and synth/keyboardist Scott Wasiliewski, Huldra have become one of the hardest-working bands in Salt Lake’s metal scene. Black Tides adds to their steady body of work, including an EP, a split with locals Dustbloom, and their first full-length album, Monuments, Monoliths. The rapid release schedule has showcased just how much Huldra have evolved throughout their existence. “I think we’re still swirling and traveling towards a certain something that we haven’t entirely found yet,” Wasilewski says.

Black Tides is indeed a new watermark for Huldra’s sound. The band’s members have been busy since the release of Monuments, Monoliths last year, with Hanna becoming a permanent member of SubRosa (complete with world touring); Brotherton’s other band, Visigoth, being signed to Metal Blade Records; Wasilewski forming his solo project Portal to the Goddamn Blood Dimension, as well as teaming up with Hanna to form the experimental black metal group, Star Grazer. When asked if these other projects inform Huldra’s sound at all, Brotherton speaks of Visigoth frontman Jake Rogers, who said the album is more riffy and less spacey than previous albums. “Basically, there are more headbanging bits and less contemplating, falling-asleep bits,” Brotherton says.

Songs from Black Tides have been kicking around for as long as a year and a half, but the album was recorded in only four days by local wizard Andy Patterson. “We had the entire album laid out and did scratch tracks for all the songs, including vocals, which we had never done before. We put a lot more time into this album,” says Hanna. “Before, we’ve just gone into the studio and winged it.” This was also the first time Huldra have handed off their recordings to be mastered by an outside source, namely Magnus Líndberg of Swedish post-metal giants Cult of Luna. “It was cool because he wanted feedback from us. There were three or four different iterations of the masters,” Brotherton says. Throughout the mastering processing, Líndberg beefed up the album’s sound, making it Huldra’s heaviest-sounding album to date—a fact that immediately strikes as soon as Brotherton’s voice explodes out of the opening seconds of “Eye of the Storm.” Wasilewski says, “There’s just the cool factor of it, too, because the guy’s a badass and he plays drums in Cult of Luna.”

One of the most memorable moments of Black Tides occurs on the title track, when Hanna’s bandmates from SubRosa, Rebecca Vernon, Kim Pack and Sarah Pendleton, lend their voices to its zenith. The three sound almost like sirens, contributing once again to the oceanic atmosphere. It’s a flourish that really makes the song stand out and will hopefully get those outside of Salt Lake to take notice of the band as well. It is also a testament to the tight-knit nature of Salt Lake’s metal scene, further punctuating SubRosa’s shout-out to many local bands (including Huldra) in national press after the release of their album More Constant than the Gods. “All the bands here are really good, and it’s too bad not more people realize that. Even outside of metal, I think some of the best musicians in the world are here,” says Wasiliewski.

With the various members of Huldra committed to other projects, it’s a wonder that they found the time to record Black Tides at all, let alone have it shine as brightly as it does. With touring, recording and other commitments, however, it has led to less time for writing the next release, which the band doesn’t expect until at least 2016. “Downtime to evaluate the kind of stuff we want to write isn’t a bad thing,” Brotherton says. The band plans on playing several more shows to close out the year, including a free album release show at Burt’s Tiki Lounge on Oct. 11. The band will be playing the entirety of Black Tides, with INVDRS and Oxcross opening the show. Bring your earplugs, and prepare to be mesmerized.