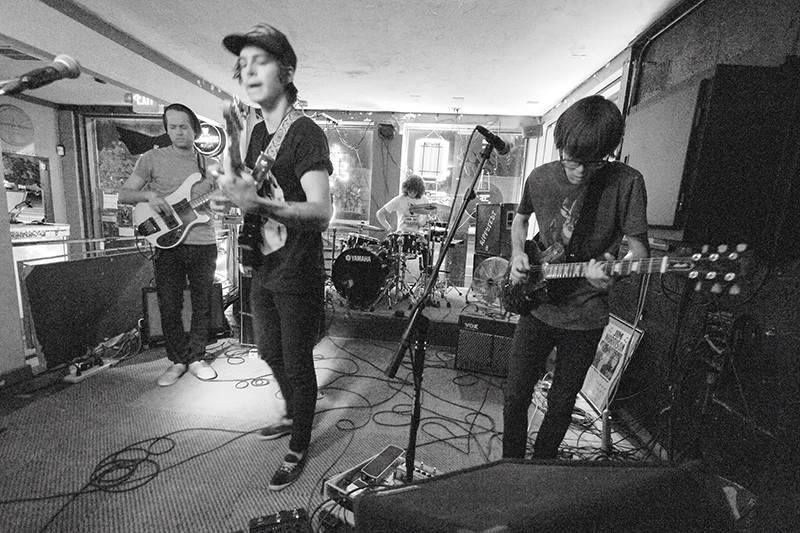 The Woodshed: Lee Just Wants To Have Fun

One night several years ago, a couple of drunk friends made drunk plans to open a bar. As one might expect from such hazy beginnings, the plans were all but abandoned once everybody sobered up. Only Lee Hoang was still up to the task, and set about turning this drunken fantasy into reality. After a lot of (very sober) work, Lee took over The Woodshed in November of 2009, and has been steadily plying patrons with libations and entertainment ever since.
Bar owner Lee, as he is affectionately known by his friends and regulars at The Woodshed, isn’t originally from Utah, but, having lived here for over 20 years now, longer than anywhere else before, he is happy to call it home. “I love the alternative culture here in downtown Salt Lake,” he says. The Woodshed, located right in the middle of Downtown just west of State Street on 800 South, is a hub for alternative culture, providing patrons with entertainment, a stage for art and expression, a sweet hangout spot with arcade games inside, a huge outdoor patio and, of course, plenty of sweet, sweet booze. Lee says he opened the bar mainly because he likes to have fun, and he likes providing that service for others, too. “[I want] to entertain people. In return, they entertain me,” he says.
Monday through Thursday, The Woodshed runs on a pretty set schedule, featuring everything from karaoke to Reggae Night. On the weekends, though, live local music rules, and anything goes. “People just love to perform, and I want to provide a stage for them. I always favor the local musicians over the out-of-town musicians because … we have a connection with them––a lot of them come here to hang out. It’s a pretty tight-knit community … We support each other,” says Lee. In love with the energy of live shows, Lee is at The Woodshed most weekends, supporting the local bands and mingling with his friends and patrons. Probably because Lee spends time at his own venue experiencing the shows for himself, The Woodshed has some of the most eclectic and consistently entertaining local lineups. Lee’s own musical tastes include everything from R.E.M. to Guns N’ Roses to Jason Mraz, so musicians of every genre can get their chance on The Woodshed stage. Lee and his booking agents select acts based simply on who they think will be the most entertaining for their patrons. Some of their favorites include locals Bombshell Academy, Wasnatch and Funk & Gonzo. My own band, MiNX, hosts a monthly ladies night every first Friday, featuring local, lady-fronted bands and free entry for ladies. Whether I’m on stage or in the audience, it’s always fun times at The Woodshed.
On any given weekend at The Woodshed, you might stumble in on a show with a variety of bands from completely different genres, get mixed up in a multi-day, mini music festival or even find yourself in the middle of a wild, DJ-spun dance party. Since no one style or genre rules, the crowd gets just as eclectic as the entertainment, which is super refreshing. It is one of the most welcoming environments in town, and even with a tight-knit crew of employees and regulars, it doesn’t ever feel cliquey or exclusive. Laura Jones, one of The Woodshed’s veteran employees, says, “Everyone who comes in here is so friendly, and I think it’s because the staff makes them feel at home.” It does feel like family at The Woodshed, and it turns out that they act like it behind the scenes, too. The snug crew even has little shindigs in their free time to do things like try out new drink special ideas and, well, spend even more time together. It’s the energy of that genuine camaraderie that starts behind the bar and makes its way out into the crowd.
Now, if The Woodshed’s cozy, divey qualities don’t loosen you up enough on their own, you can try some of the aforementioned delightfully creative drink specials that The Woodshed staff have concocted for your pleasure. Have a “Sex on the Shed,” the most popular of the cocktails, or a “Lime Rickey,” a tasty little treat that’s not nearly as innocent as it sounds. Take your drink out back to spend some time enjoying the spacious patio, a highlight of summertime in downtown Salt Lake City, and enjoyable even in the winter with a couple of fire pits to gather around and chat with new friends while you defrost your fingers.
While you’re out there making new friends, you might just happen to meet a really nice guy named Lee, and if you do, give him thanks for doing his part to keep our alternative culture alive and supporting locals first. Maybe even buy him a drink, because really, Lee just wants to have fun, and you know what? After everything he’s done for our community, he totally deserves to! Cheers, Lee!
Photos: