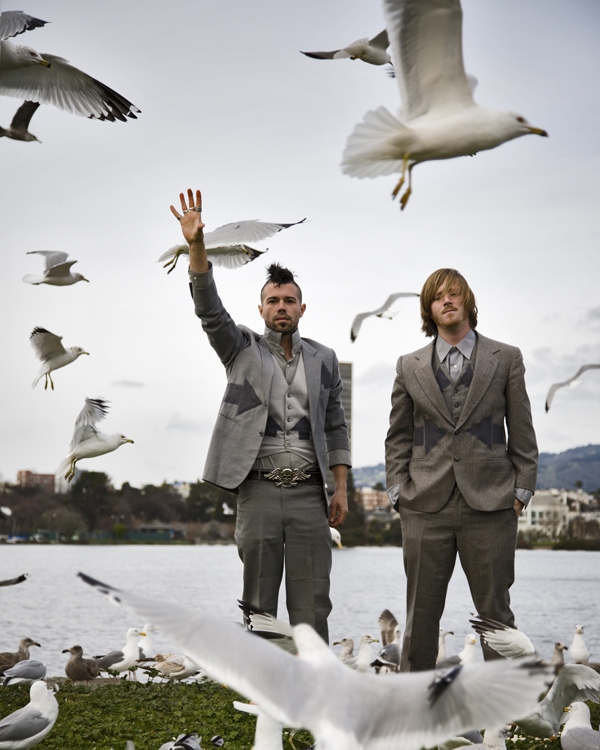 Doseone (Adam Drucker) and Jel (Jeff Logan) are back in their underground hip hop duo to bring fresh prose and honest beats to the rap kingdom. Themselves debuted their unique style in 1998, but over the past six years melded into other notable projects, including the experimental rock/rap group Subtle, their 13 & God collaboration with The Notwist, and their own respective solo releases. The creative duo returned this year with the release of theFREEhoudini mix-tape and CrownsDown, their third album, through their collective indie label, anticon. records. SLUG caught up with them while on their European tour for an interview reflective of their eccentric style and personality.

SLUG: How do you think your music has changed over the past 10 years, especially after your six-year hiatus?
Doseone: Jel’s wordplay on Jay-Z’s The Black Album is all counter accountable to his beginnings as the only infant in women’s prison. We still laugh sometimes at the smudged and stretched anchor tattoo he got when he was one.
Jel: Also, we have grown away from and  toward our origins, while we may have lost sight of our success issues, we both feel very focused and clear about  why we began making music, and what music it was that made us do so. That music was rap: raw, refined and varied as it was in the early 90s. That being said, our new music also includes all of the editing, cutting loose and tricks we have un-mastered in the past decade, from prose to production.

SLUG: Both of you have been very productive in other projects and collaborations, who are your favorite artists to work with and why?
Doseone: Most of the internet columnists that I meet don’t really understand that on “Buggin’ Out” by A Tribe Called Quest, Phife Dawg does not only come up short on height, he also has no grasp on the laws of physics. For favorites, like Notwist , Serengeti, Icey Monkeys, Dax Pierson, Genghis Tron, Health, Tony D, Lady Dada, Liars, Rob Crow, etc. etc. When we worked with Peaches I had to wear her show beard throughout the entire vocal session, and I kept drinking out of the wrong dildo. I was a mess that day, but we made some classic rock and roll together.
Jel: In all honesty, we follow our relationships and aesthetic toward our next music-making experiences, not career paths or cash trails, and this keeps us on the good-people path to more great music. All of our recordings are another step in the stairwell of learning through trial and error, so we learn a great deal in both working alone and with others.

SLUG: Doseone, you’re well known for your unique style and skills in speed rap, is this something you started with or evolved into?
Doseone: Evolved into … one should never jump blindly into double time, you will inevitably sound like the micro machines man, all rushed content, crammed along the inarticulate stumbling of an untrained tongue. I began as a freestyler and slowly formed a rap writing style, verses first, then songs. Then I met Why? and we unlearned our own prose leanings, my writing changed, and all the while I tried to rap with the music, not against or on top of it. This gradually allowed me to speed up, sing, and eventually hear my own unique cadences and tonality, whether fast or slow. The real key to fast rap is jumping without a ‘chute … just letting go, the rest is being critical, and practice … it took me three weeks to make sure I did not flub a single syllable.

SLUG: Jel, is it true for you that the gear is only as good as the artist?
Jel: Well in past interviews I would have said something very similar to that.  Now that I’ve been getting back into mainstream music and keeping a keen eye on the Myspace underground, I’ve realized that if you have the right sound, which can only come from preset software, or just taking someone else’s song and throwing a bunch of other cool sounds on top of it, you will definitely be successful and maybe even as famous as Kanye Mouse, and/or Sinter Gold.
I have been studying how Jay-Z studies underground music for years now, and I think that the formula that he is about to unleash on the world will bring the world to its knees. I plan to blow up using the same plan way before he can put out the next Paul Barman. So in essence, to quote Charles Akai, “You can lead a beat machine to beats, but you can’t make it loop.”

SLUG: You guys are a major part of anticon. records, are you satisfied being an underground hip hop duo on an independent label, or do you hope to sign to a major label in the future?
Doseone: We rep the ant till death do us part, no other labels for us.
Jel: We measure success in longevity and quality of each precious stone cut, we can keep doing what we were meant to do for our appreciators and their loved ones while all the rock and rap stars scramble to reinvent themselves, we get to stay Themselves. I would call us lucky.

To delve deeper into the bizarre thoughts of Themselves, youtube “world’s worst burglar,” “baby love head rub,” and “Vanilla Ice vs. Todd Bridges.” To hear the creative content produced by such minds, check out Doseone and Jel in their duo at the Urban Lounge with Mindstate on December 12.