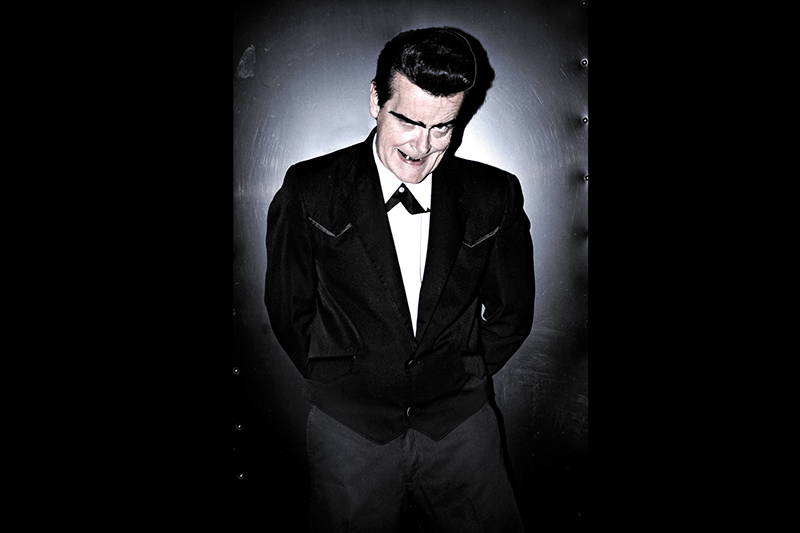 Unknown Hinson: Fear of the Unknown

When I think of the classic country music era, what strikes me is how many colorful and different characters there were. There were dangerous personalities like Merle Haggard and Johnny Cash, and happy, genial types like Buck Owens or Eddy Arnold—whatever they were, they were memorable. For whatever reason, these characters seemed to have all but dried up, so when you discover a character like Unknown Hinson, there’s so much to latch onto that you can’t help but become fascinated by him. This king of country western troubadours—who stops by The Depot on March 5—discussed all sorts of topics, from his hair to his guitar playing. The conversation, with his signature Southern drawl on the other end, left no doubt in my mind that he’s truly one of a kind.

SLUG: What do you think of country music today?

Unknown Hinson: It ain’t got no heart, no sweat. It’s completely manufactured. It’s something to keep the vidiya [sic] meters a taggin’. I don’t pay no attention to it. I couldn’t tell you who the number one country star is if my life depended on it. I don’t listen to the radio unless it’s an oldies station or something.

Hinson: My favorite all-time country artist is Faron Young—he was popular back in the ’50s—and guys like Lefty Frizzell and Hank Williams Sr., of course—just real, honest songwriter singers. These days, it’s a whole circus where you pay $50 to $100 to see ’em get up and pantomime their songs. Some of them don’t even really sing onstage.

SLUG: You’re quite the accomplished guitar player. Who are some of your guitar heroes?

Hinson: Well, my mama picked guitar when I was a little-bitty boy, and she showed me one chord, and after that, she said, “Look here: If you want to do this, you’ll figure it out,” and she disappeared. I never saw her again, but I stuck with it. As far as heroes—Django Reinhardt, Merle Travis, Chet Atkins, Joe Maphis— I even like some of the surf guitarists like Dick Dale. I like anything that’s well-executed.

SLUG: You have such a great head of hair. How have you kept it up all these years?

Hinson: It’s a lot of work, but I would do anything for the wor-mens [sic]. My wor-mens fanbase wants to see me, so it’s the Unknown Hinson ecosystem. The wor-mens get their men to buy tickets—‘cause they want to see the King singing and playing his guts out—and buy her drinks, so when she’s feeling real good, he gets lucky when he takes her home. I don’t get to go home with her—I just put her in the mood. That’s my job; that’s my quest.

SLUG: It was recently Elvis’ 81st birthday— R.I.P. What are your thoughts on Elvis? Is he still the King?

Hinson: He’s definitely the King of Rock n’ Roll. If you don’t like Elvis, you must be communist, ya know. I like his early stuff, before he went into the service, before he started making all those Hollywood movie pictures and became a different thing.

SLUG: You’re coming to town with The Reverend Horton Heat. Do you like touring with them?

Hinson: We just did our third show last night, and it’s been wonderful. Everyone’s treatin’ me real well, and touring with Reverend Horton Heat is great. They’re like one of my top three favorite bands in the world. They’re unbelievable musicians, and it’s such a treat to play with and watch them every night.

Hinson: One of my show-date concerts: everybody happy, good sound, lots of liquor and plenty of purdy wor-mens. That sounds good to me—that’s all I really need.

SLUG: Who do think should be our next president?

Hinson: To be 100-percent honest with you, I don’t even know who’s running. I don’t follow politics. I’m not allowed to vote ‘cause I’m an ex-con—I don’t have a votin’ card, so I don’t pay it much attention. All I can do is live each day as best I can, love as many wor-mens as I can and entertain the folks.

To say Unknown Hinson is quite the character would be a vast understatement—he’s set on a path to reach legendary status. Folks will be talking about Unknown Hinson for years and years after he’s gone, and there’s something right about that. Check out Unknown Hinson when he plays with The Reverend Horton Heat and Legendary Shack Shakers at The Depot on March 5.