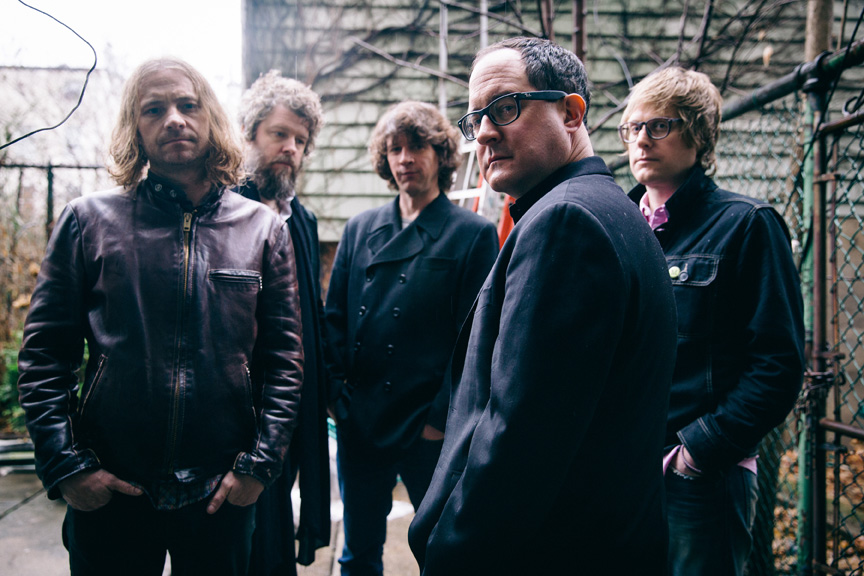 I was doing a lot of drugs when I first heard the Hold Steady’s debut release, Almost Killed Me, in January 2004, and I was enraptured. I thought, “These guys are brilliant, they live the crazy drug lifestyle and use their experiences to produce this unbelievable art that people like me can really relate to. Wow!” Since then I’ve cleaned up my act and discovered that Craig Finn makes up most of the vibrant stories he sings about in first person, channeling what he sees around him into powerful narrative. I’ve also realized that doing drugs isn’t nearly as cool as I once thought it was, and thinking about the incredible artistic and observant prowess Finn must harness in order to create the worlds he talks about, I am still enraptured, and I still think it’s brilliant.

“Coming up with this stuff, it’s not complete fiction; it’s not coming out of nowhere,” Finn told me in an April interview. “It’s taking things from my life and people I know and making characters out of them. I’d rather do that than sing about my feelings.” There aren’t many feelings mentioned in any of Finn’s lyrics, either with the Hold Steady (from Brooklyn) or his former Minneapolis-based band, Lifter Puller, but this is not to say they don’t invoke emotion. His use of reoccurring characters and settings invites the listener to take residence in his songs and become directly engaged with what he’s saying. Think of him something like a Springsteen/Burroughs cross who’s been in the bar/party scene for nearly two decades and has seen exactly what all you kids have been up to: “One thing that you realize is that some of these things are universal. The drug parties I was at when I was your age probably weren’t entirely dissimilar from the ones you were at. Assuming that, I think that’s somehow how we end up connecting to people.”

Finn’s ability to witness and depict the exhilarating highs and terrifying lows inherent in young, wild life and then to escape unscarred to tell about it eloquently has helped make him one of the absolute best lyrical storytellers I, and many others in the music critic world, have heard in a very long time. But, as Finn points out, as journalists, we might be biased. He says, “In general, I’m blown away by the critical acclaim that Almost Killed Me got and I think there’s a couple reasons for it. One is that there’s a lot of words in our stuff, and journalists work with words and tend to be attracted to them, that’s what they chose as their occupation. The other thing is I think that, like us, in reacting to some of this retro new-wave dance punk stuff, maybe there was sort of a nod in agreement. The people who cover music for a living could be saying, ‘Yeah dude, I’m sick of this shit, too.'”

The critical acclaim Finn speaks of includes, but is certainly not limited to, topping all of the 2004 Rolling Stone, Magnet and Spin “Top Ten Albums You Didn’t Hear” lists. I asked Finn if this is a strange position to be in. He said, “It’s funny. It seems like one of those things you’d show to your dad and he’d say, ‘Well, why didn’t anyone hear it?’ But again, when you’re on Frenchkiss Records and you’re competing against Radiohead, then you understand you’re not on the same level. For example, Spin invited us to play their party at South by Southwest, and they put us on second, after a band called Louie XIV, who are on Atlantic Records. I thought, ‘They’re on Atlantic, and yet they’re opening up for us. Let’s see how long this lasts.’ Sure enough, Atlantic called up and told Spin, ‘We pay thousands of dollars to advertise in every issue and blah blah blah.’ But we were prepared. We agreed but said, ‘Well, we want an ad for our record in your next issue then.’ So basically we were bumped slots and ended up with a 10- or 15,000-dollar ad. So there’s still two different levels, and when you’re talking about the record that no one heard, you’re talking about that.”

Separation Sunday came out on May 3 on Frenchkiss and is the Hold Steady’s second release. Like Almost Killed Me, it’s snide, intelligent bar rock crammed with elaborate rock riffs, heavy backbeats, tales of debauchery and iconic American pop references. As Finn mentioned, it’s completely reactionary to the “Brooklyn sound” that has dominated his neighborhood for the past few years on the coattails of bands like Liars. He says, “That’s kind of why we started the Hold Steady, listening to all this new-wave/retro dance punk stuff that was coming out and just being like, ‘This is actually kind of terrible. None of these bands are as good The Replacements,’ a band that I grew up watching that meant a ton to me, and all it was was two guitars, a bass and drums and some good songs.”

At the same time he battles against what he sees as the unsatisfactory scene around him, Finn is simultaneously fighting to revive an element that exists in the core of rock n’ roll-danger. He says, “Thinking about the stuff in rock n’ roll that has really moved me, listening to the Replacements and the Rolling Stones, there was always an element of danger. Even something like Cat Power or quiet like Elliot Smith is way more dangerous … well, that ended up doing Elliot Smith in … than Death Cab for Cutie. Emo brings up something like, ‘Wow, they’re really nice guys and approachable,’ but that’s not really what I want out of music.”

Finn’s sword in this fight is his pen as he writes songs painting pictures of treacherous underworld drug life where a secret handshake can score you a bag of whatever’s going to get you the highest, or end you up in the hospital. Generally, as soon as drugs are mentioned in a rock song, it’s perceived as glamorization. Finn couldn’t deny that he’s been guilty of this a few times, especially while writing songs for Lifter Puller (i.e., “I was kissing on some crackhead/Said he knew about a party/Keeps it in his mouth in those crazy chipmunk cheeks/I gave him 50 and kissed me, spit a little treat between my teeth”), but it’s not necessarily intentional, and it seems as he’s growing up a bit, he’s coming to terms with his responsibility as an influence himself: “One of the things I wanted to do with the Hold Steady is to make it a little more positive, you don’t want to give people the wrong idea. I was at a Lifter Puller show and these kids came up to me and said, ‘Dude! Dude! Craig! We’re on ecstasy!’ And I was just like, ‘I don’t know if that’s such a good idea.’ I mean, that’s definitely not my thing, I’ve taken it and felt like I was going to die, so I wouldn’t really want to recommend it.”

By listening to Finn’s music, one might be able to sense his broad range of artistic interest, which the enthusiastic tone in his voice during this interview certainly affirmed once we stumbled upon the topic of hip-hop. He says, “The Rhymesayers label is really inspirational to me. POS is a new guy on that and I just did a cameo on his record. It’s really not too far off from what I do in the studio, have the songs written first and then I come in and do the lyrics on top of it. He just recorded this song and I went in and did a verse. It was great. The verse I did was about the one movie I’ve ever walked out on in my entire life that I paid for, Predator. I talk about the irony in it that Jesse Ventura and Arnold Schwarzenegger both went on to become governors.”