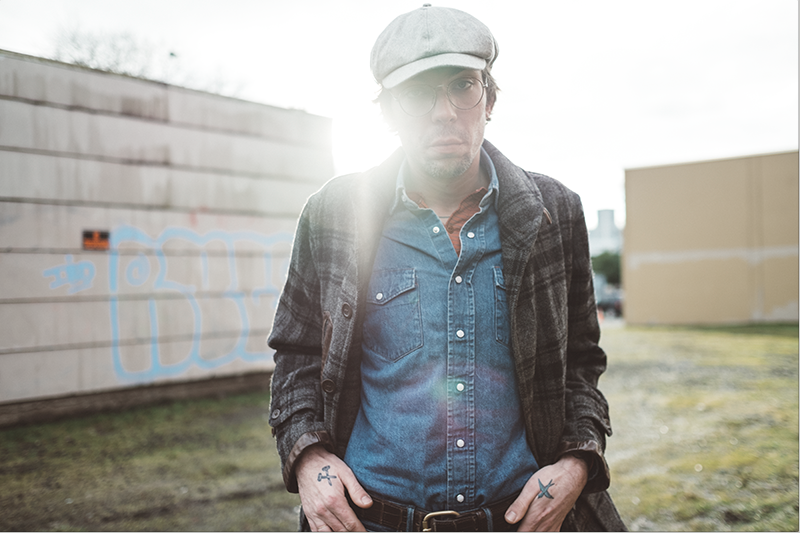 There’s an inherent conflict to Justin Townes Earle. He’s never traded on the fact that his father is a music legend, but like his father, he’s staunchly original and possesses innate musical ability. He’s often touted as Americana or alt-country, but he’s able to incorporate blues and folk in a very sincere way, while still keeping himself as a through line in each song. He’s an American singer-songwriter with an interesting perspective that simultaneously looks both backward and forward. Out of all the conflict to him, he’s able to move forward and out of it create records that reach people.

I had a wonderful opportunity to speak with Justin Townes Earle in person backstage before his May 28 show at The State Room here in Salt Lake.

SLUG: Your new record, Kids in the Street, just came out a couple of days ago, and I’ve already seen reviews and reactions to it online. What do you think of people reacting to so quickly?
Justin Townes Earle: I’m not one to read reviews, and we released this one in a different fashion by releasing three singles first, giving people a chance to hear some of it. It’s interesting, because there’s this buildup to the release, and we’re out on the road, and it comes out, and then everything is just the same, and we just go on.

SLUG: Listening to music is so disposable and quick and easy now. How do you feel about the way your music is digested today?
Earle: I think that the musicians are as much to blame as the listeners. We have to make music worth listening to. It’s just a sad fact that so often, I hear a song that gets me excited and I go and listen to the whole record, and it’s like I’m being beaten. The kind of quick-spin things like Pandora just goes from artist to artist and has changed the way we take things in. But things are always changing and evolving. I remember, as a kid, hating that these compact discs were going to take out my cassette collection, but I did like being able to skip right to the song I wanted with stopping and fast-forwarding.

SLUG: You’ve always had a considerable amount of control, even from the beginning. How did you start out with control, and why is that the best way?
Earle: When you’re a singer-songwriter, which really means control freak, you have to be forceful and back up everything you say. I look my record people in the eye and say I’m going to produce this record, and then I’ve got to go in and do the work and produce it. You have to make them comfortable. When I had my first release with Yuma, I had already sold 2,000 copies with no distribution of any kind. So that showed them I was ready for the next step up.

SLUG: What do you think of the recent popularity of Americana, with artists like Sturgill Simpson or Jason Isbell?
Earle: I think it’s important to say that’s great, but I have to keep doing my own thing. I’m certainly not saying I wouldn’t take that kind of recognition and work with it, but I don’t know if I want that level of fame. I usually get recognized going to get coffee in any town I’m in, but don’t get bothered, and I like it that way. I see what’s happening in Americana, and it reminds me a lot of what happened to alt-country in the ’90s where you had this rage of music come on, and it produced some big things, but by 2005, alt-country was a death nail.

Americana used to be this exclusive club all about doing your own thing, and now—excluding guys like Isbell who have always done their own thing—and now it’s been watered down, and some things that are being called Americana, I can’t tell the difference between that and what comes off the [Music] Row [in Nashville].

SLUG: There’s a long mythos surrounding the legend of Stagger Lee, and you do you your own take on it on the new record with “Same Old Stagolee.” What made you want to tackle this story?
Earle: There’s a lot of different versions of that song, and what they amount to is someone getting killed over some ridiculous reason, and the story rang out true that it was still inspiring hits until the ’60s, and the idea of someone getting waxed over a Stetson hat, has changed. I think what’s important about a great folk song is that it has the ability to change and transcend. I never want that tradition to die. In mine, a kid getting killed over trying to date a girl from the wrong section of a neighborhood is something modern and real.

SLUG: Growing up in Nashville—and your father being who he is—have you ever been sick enough of the industry and everything to leave it all behind?
Earle: I’ve been at those points where I’ve thought about walking away, but never with any kind of seriousness. There’s so many different facets to this, between touring, writing and recording, and you have to have all three. I might get frustrated with part of it, but I can’t imagine doing anything else. I’ve been doing this for more of my life than I haven’t. So it’s definitely what I know, and I still find it consistently intriguing and exciting.

Justin Townes Earle takes the best of American music and makes it his own. His personal compass points him in the right direction, and he knows it’s right, because it comes from him and only him. The show that night was stellar, and his new record, Kids in the Street, is another testament to the man’s talents and abilities.