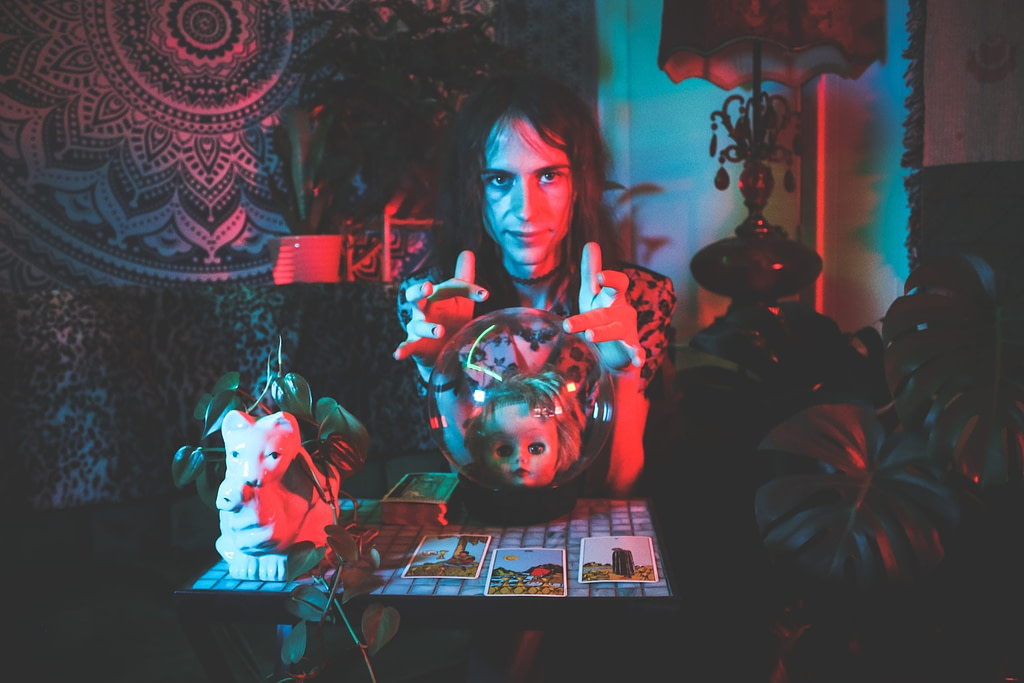 Who’s Behind The Music?: An Interview with Evvy Shark

Today, SLUG is thrilled to premiere “Squeeze Like Grape,” the new single from avant-pop artist Evvy Shark. Check out the single, and find a Q&A with Evvy Shark’s Jarik Hieronymus below.

Lately, I’ve been in a rut when it comes to discovering music that’s worthy of intense listening sessions. I keep finding myself in a shuffling wormhole with Elton John. Sure, great hits for a commute, but shit, how long can I keep this up?! Thank god I was lucky enough to take on Evvy Shark and listen to their newest, experimental release, Ms. Liza’s Psychic Hotline. It’s a fragile album, one that makes you feel special and bewildered, as if you’re in someone’s most intimate moment. Yes, this is Evvy Shark. And I had the pleasure of asking Jarik Hieronymus questions about her personal evolution that is Ms. Liza’s Psychic Hotline.

SLUG: How did the Evvy Shark project come into existence?

Evvy Shark: It started as a few demos I worked on while my band, Analog Watts, was getting ready to release our first album, No Mo Run. I thought the name Evvy Shark was kinda cute. A few years later, I wrote an EP that I released under the name Sun Dogs but felt like it didn’t suit the project, so that EP became Sun Dogs: Parhellish, the first “official” Evvy Shark release.

SLUG: What were your influences for this new album, Ms. Liza’s Psychic Hotline?

ES: MLPH started as an idea for a split my friend Steve (who records and performs as Bluffs) came up with, the premise being that we send each other song titles to write a song for. I ran with it. I wanted to do as many as I possibly could. I ended up writing the title track “Ms. Liza” based on a poem I wrote a year or so earlier when I would pass a psychic advisor on my walk to and from work. Old commercials for psychic hotlines/party lines/sexxxy singles—they’re so silly—but the mystique of a psychic hotline was the perfect image of how I felt: through the phone came a cryptic message that tapped my subconscious and filled me with the desire to express the fleeting feeling at any cost.

SLUG: Mental health seems to be a major theme in your album. Can you elaborate as to how these themes inform your music and artistic process?

ES: My relationship with (and understanding of) my own mental health often feels nonsensical and bogus, [with] me the clown at the center, not truly feeling like the ringleader. Music has been a way to process those feelings and experiences. I can listen back and see the entire image of my life in that moment, so I think my mental health imprints itself as a timestamp on certain songs, if only to me. It’s good and important to create, even when I’m doing it for fun or out of the pure necessity to create. Not all good art needs to convey the complex picture of your psyche.

SLUG: What importance do you think discussing mental health holds in art and music? How has this process specifically affected you, in positive or negative ways?

ES: Conversations about mental health—what to do when you need help and what NOT to do when trying to care for it—are important because they help people see and hear each other more clearly. I’ve had moments in my life where I reached out to friends when I was struggling, but I approached it in a way that was harmful. And if I had had the opportunity to engage in meaningful discussion about how to talk about mental health prior to those interactions, it would have saved us the uncomfyness that resulted. It also helps make a stronger community when people understand each other, when we have boundaries and transparency. Those conversations are important beyond the realms of art and music.

SLUG: The concept of identity seems to be a theme, as well. How do you see this theme as manifesting itself into your music?

ES: My identity—especially that of my gender identity—definitely bleeds into my music. I’m a nonbinary trans woman, and it’s hard to separate my art from my own vision of the world through my nonbinary trans eyes. However, not all of my music is a reflection of my identity. When I move my nonbinary trans arm to twist a knob with my nonbinary trans hand, it’s no different than any other hand twisting any other knob. But it is. The astronomical odds of someone doing something exactly the same is stupid to think about.

SLUG: What makes us uncomfortable with our own sense of self, in your opinion? What do you think can help remedy this?

ES: Anything and everything can make us uncomfortable with our sense of self. Maybe, a glimpse in the mirror, a thought you thought too loud or a sentence you spoke six years ago. The cure? I have found drinking is not that.

SLUG: MLPH arrives with a visual album. Can you please explain your process, inspiration and intent with this?

ES: I’ve always had an interest in video (film) as a medium. Really, I wanted to make a movey (sic). I recorded footage on tape cameras I got over the years and then recorded those onto my phone. Videotape and camcorders have wonderful paintbrush qualities. Tape smudges the pictures and colors, which beg to be explored beyond its nostalgic appeal. The idea of pulp absolutely informed the videos. I love those previews on old horror VHS tapes too. You see the same tropes in all of them, and you’re barely left with the ability to know if there’s anything deeper than what you just experienced. I love that sense of unknowing. I love the question of whether or not to look more closely at something because you can’t decide if it’s worth it; the idea that you can extract a nuanced feeling from something that was meant to be meaningless.

SLUG: To me, the visual component has a sense of urgency and fear. How do you feel like these feelings inform the album and accompany the video?

ES: There’s definite urgency in my approach to filming. I was chasing the same flame that helped form the songs: Any idea at any moment could vanish into thin air. The fear, in part, comes from the nature of the video. Everything visually [was] smudged from too many transfers [and] quick, successive edits. There isn’t much room to breathe in the visual album. That feeling of claustrophobia is kind of reflective of the space in which I was making the videos (my tiny apartment, editing on my tiny phone).

SLUG: Anything that you’re hopeful about in regards to the new year?

ES: I’m hopeful about music and live music too. It’s easy to say that live music is dead, but the truth is that everything will come back at some point. No one ever stops creating. I’m hopeful that if the live music scene revives in 2021, it won’t be white-washed or predatory—it will be accessible. I’m also hopeful that more white people, like myself, work harder on taking up less space and use our privilege and money to uplift marginalized folks as a necessary part of rebuilding “the scene” into a place for people of all intersections. I’m hopeful about quitting cigarettes. I moved to a new city and still pass a sign for a psychic advisor, which I’m convinced is run by a ghost every time I walk to the ciggie store …