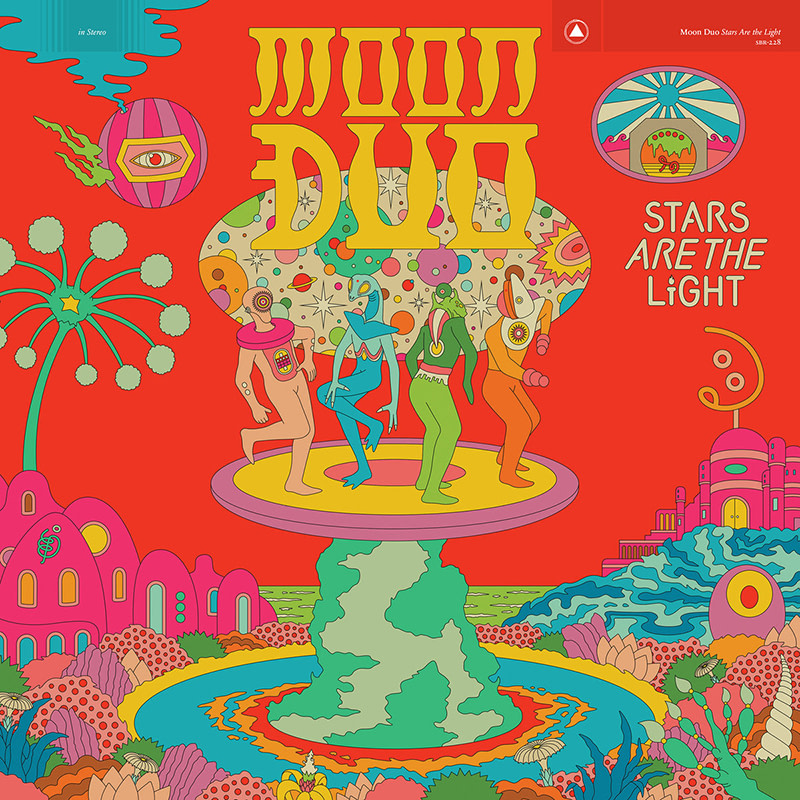 Moon Duo | The Stars Are The Light | Sacred Bones

Review: Moon Duo – The Stars Are the Light

Moon Duo
Stars Are the Light

Moon Duo are known for their psychedelic rock, along with keeping their music as simple as possible. That doesn’t change with their latest album, Stars Are the Light, which has a lighter air surrounding it. This lighter sound isn’t new to guitarist Erik ‘Ripley’ Johnson and keyboardist Sanae Yamada. Their two-part album, Occult Architecture Vol 1 and 2 from 2017 represented the Chinese concept of yin and yang, where Vol 1 was the yin side and Vol 2 was the yang.

Stars Are the Light starts off with “Flying.” The track opens with tropical, dreamlike keyboard synths and a familiar guitar riff which is a great introduction to the eight-track album. Moon Duo’s psychedelic aspect remains prominent within the tracks. Yamada’s soft and angelic voice is heard more than in past albums, which is a nice touch to this album. The first single, “Stars Are the Light,” is not their strongest track, but it’s a good track that serves as an example of what the album is set up like with its mellow, dreamy vibe.

Every track on the album has a common theme of little to no variation, which is not surprising. Tracks such as “The World And The Sun,” “Lost Heads,” and “Eternal Shore” are ones that don’t stand out. They sound too similar, with the same wavy guitar riffs and the same flying saucer movie noises that have been subtly dipped into the tracks. Moon Duo stay true to the simplicity of their music with these compositions.

“Fall In Your Love” is the track that I fell in love with because of the heavy bass that starts it off. Scratchy synths are added in before Ripley’s guitar riffs create a cowboy vibe. The hollow sound of both Yamada and Johnson’s voices echoes throughout the song, along with the simple lyrics that they pull off well in many of their tracks.

A rough guitar riff starts the track “Eye 2 Eye” and carries by itself as it’s cut into silence three times before a swift keyboard synth is added in. This track is one that took me back to “Seer,” a track off of Moon Duo’s first album Mazes. With scratchy guitar solos in the far background playing along with rapid, breathy keyboard synths, Moon Duo incorporate all these sounds in a way that it doesn’t sound like they threw up all over the track—It’s laid out in such a way that it enchants me.

The album’s closer, “Fever Night,” starts with a soft guitar that gives off a folk vibe before euphoric synths are added in. Johnson and Yamada’s smoky voices blend smoothly with each other and within the track. Moon Duo’s use of psychedelic beats plays out in various ways, from guitar riffs changing to high or low tempo to keyboard synths that spice up the song which makes for a strong track to finish the album.

I like this album because Moon Duo stays consistent on it, yet their sound evolves slowly with each track. The lighter sound fits Moon Duo well on Stars Are the Light. It’s different from their past albums and shows how much they’ve grown as artists through the years. They know how to keep the rock part of their music intact even though the album has adapted to more of a pop sound. Their songs still have a trance-like wave that’s been heard in the past. Wherever one decides to listen to the album, be ready to be taken on a euphoric journey. –Kimberly Portillo