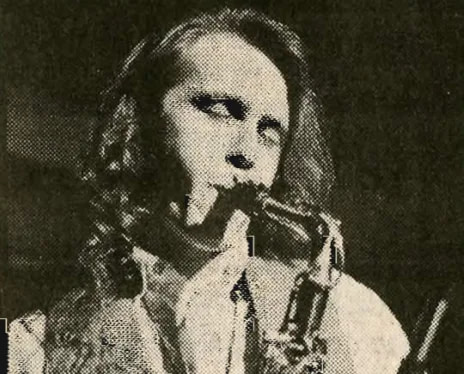 "It really is good music and the band has a whole lot to add to the Salt Lake Scene."
Photo: Steve Midgley

No there is no typo on this headline, the name is Swee Rhino. Why? It’s simple, see that is how James Brown would pronounce the name.

I never thought I would see the day when the Salt Lake scene would come to something like THIS! Dave Neale and Billy Blizzard in the same band! What have we evolved to? I will be honest, when I first saw them play I said “What the fuck is this?” However, after spending two hours in the most outrageous interview I think I finally figured these guys out.

This six-piece band is very brave. When I heard that they were, you know…funky, I expected to see a Boxcar wannabe band. Boy, was I wrong. This is not the intention of the band at all. They consider their music a cross of alternative rock and alternative jazz. With improvisation being a very important element. The only influence I could get the whole band to agree on were Universal Congress Of James Brown and Schooly D. By the way, if you were to ask them what kind of music they play, they don’t play music, they manipulate sound vibrations.

Swee Rhino consists of Dave Neale (vocals), Billy Blizzard (guitars & cool-man dancing) Billy Olson (bass), Lorenzo Ciacci (drums & hair), Matt Moore (coronet) and Craig Scott (saxophone). The band doesn’t try to make any big statement with their music. Dave Neale, head-honcho-lyric-dude, writes mostly with objective political overtones about personal hygiene and freedom of the skull. Billy Blizzard says the biggest obstacle they face is that people try too hard to evaluate the rhythm and don’t just let their senses feel the groove. If people did they would all look like him when he plays…unleashed fury.

The band needs to spend a little more time together with each other and their instruments if they are going to rely on improvisation. It is a great way to play music but a certain element of longevity is required to be able to pull it off. Next time they play, listen with an open mind or get wasted. It really is good music and the band has a whole lot to add to the Salt Lake Scene.