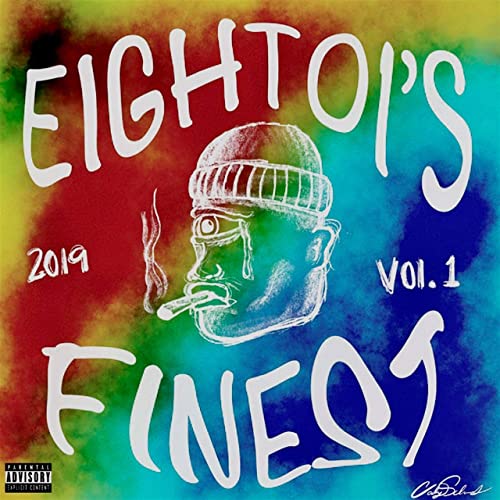 Listening to the Eight01’s Finest debut album, Vol. 1, is like taking a crash course in hip-hop and rap history. The album is reminiscent of everything from the late-’80s golden age to the ‘00s R&B-infused and hyper-autotuned rap to the modern mumble rap and trap. With every track showcasing a different style, this local rap collective has pulled together a dynamic album that keeps the listener on their toes.

Vol. 1 starts aggressive and energetic with “Jump!” and “Propaganda.” These tracks blend simple, repeating breaks with trap sounds to create something that is both nostalgic and modern. They also show how every member of this collective can rap with impressive precision. They manage to transition seamlessly from hits as sharp as a knife to flows as smooth as water.

The tone becomes more laid back with “Al Casino,” which could have been plucked straight from 1994. The track has samples of saxophone and Al Pacino’s voice, which the producers have melted straight into the rhythm. There is more emphasis on the vocals in this song, which displays each member’s individual talent. They pass the mic around so that everyone has a turn to sit in that slower pocket and slip right into the rhythm.

Even though the album feels like going through a flipbook of hip-hop subgenres, nothing seems remotely out of place, even the track “By the Way You Killed Us All.” This track falls more into the pop-punk ballad category, with one acoustic guitar crescendoing into a dramatic electric peak. It’s also the only song with just singing and no rapping. It takes the time to slow things down and lets you process the first half of the album before diving into the second half. The track does stand out the most out of everything on Vol. 1, but not in a bad way. It shows the diversity of Eight01’s Finest’s style and the breadth of their range.

If “By the Way You Killed Us All” feels like hitting a section of glassy water in a river after rapids, the break is short-lived, as the second half of the album puts the listener right back into another turbulent patch. These tracks have the same aggressive energy that the album starts with, highlighting all the rappers’ incredible speed-rapping abilities. Every word is clear and easy to understand, even when delivered at 70 miles per hour.

Vol. 1 flows back into a slower, trap vibe that makes the listener feel like they’re sitting in a smokey club with dramatic lighting. Eight01’s Finest’s have the ability to alter samples just enough so that their source is not quite noticeable. With “Bikini Bottom,” they sample the SpongeBob SquarePants music in a way that mixes smoothly with their vocal styles. Their debut ends with “Credits…” and transports the listener right back to that ‘90s hip-hop feel. With a simple break, great flows and effortless rapping, the track brings Vol. 1 full circle.

Even though this album illustrates many established hip-hop styles, Eight01’s Finest have made an album that’s compelling and diverse. Their ability to blend subgenres makes Vol. 1 a unique listen and showcases this collective’s talent. Vol. 1 can be found on Spotify and Apple Music. –Marina McTee