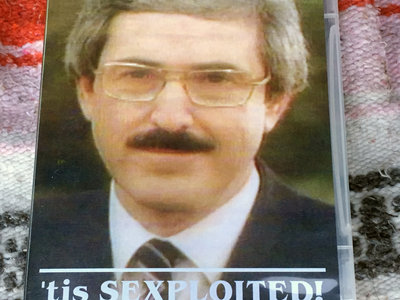 The latest from Fisch Loops comes in the form of an audio-visual release with a film created by—as the packaging simply lists—Blair. Throughout the short piece, Fisch Loops plays through an array of woozy and psychedelic half-songs over a montage of found-footage loops. The product of this is a highly absurd, often jarring assemblage that ranges from pure silliness to thought-provoking combinations of sound and film

luv not ded,‘tis SEXPLOITED! is cut up into nine untitled sections, with each one containing a different piece of music and video. The title of the record coincides with the way the looped vinyl samples and visuals function: wholly exploited. If the sights or sounds used here once had any sort of meaning, Fisch Loops and company throw it out. Everything exists void of context, repurposed to fit the confounding and playful visions that these artists set out with. Take, for example, the fifth cut. At one point, what seems like what was a utopian panoramic across a beach community is accompanied by a slightly off-key piano loop and a grating synthesizer lead. Fisch Loops takes these pleasant scenes and makes it seem like a mask for a dark and gross underbelly.

A few of these sections (particularly the first and sixth) choose to feature clips of vibrant, amorphous blotches of color rather than coherent scenes. The music of these sections happens to be the most conventional and catchy, falling back on simple garage rock or psych riffs with some non-harmonic keyboard improvisation. The most notable part of luv not ded, however, is the incredibly strange and uncomfortable eighth section, which features a chopped-and-screwed version of a swanky soul jam placed over eerie and somewhat sensual footage of people in skin-tight jumpsuits doing yoga, meditating and laying around a field.

luv not ded follows in the footsteps of other post-vaporwave art, attempting to expand on that genre’s love of hazy atmospheres and nostalgia in order to create emotional diversity and meaning. Often, the release is spooky, but it’s also liable to move between mind-altering, soothing and confusing. Overall, this work demands attention, to the point where it’s easy to miss many of the subtle alterations or glitches if you’re not giving it your full attention. –Connor Lockie