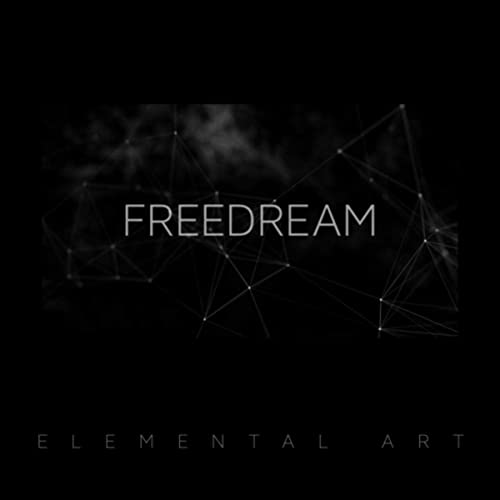 Last spring, Freedream released their debut album, Elemental Art. This product of when “America and Russia meet in Salt Lake City” clings to an industrial rock sound with an added layer of singer-songwriter lyrics. The top-notch production on this record illuminates the tightness of this band, showcasing their specific sonic resonances.

Elemental Art kicks off with “Alone,” an existential rock tune that sets the bar for the emotional motif throughout the album. Guitarist Zhenya Shashkov eases between picking a translucent riff to squealing tones in the chorus that emphasize vocalist Tom Larkin’s lyrics of being okay to go it alone. The alt-rock sounds continue with “Lost on Me,” where drummer DenG boosts Shaskov’s strong descending guitar melodies. This long intro eventually centralizes around Larkin’s doom-laden vocals. “I’m asking you for a sign,” the chorus chants, while vocal harmonies wrap the listener into a dire comfort. The breaths of instrumental breaks throughout this song help emphasize the heavy-rocking choruses and guitar solos.

Other-worldly sounds are introduced in “Comet,” with production creating a sense of orbiting through the unknown, amplifying the intention of the song’s title. Bassist Alexey Pismensky grooves this song along by staying consistent from the verses to the chugging choruses—a perfect recipe for a hard-hitting rock tune. The speed starts to slow down in “Sailaway,” where dense chorus effects on guitar create a dream-like essence, making room for Larkin’s voice to soothe. It’s the only song on the album without any drums, making it the most singer-songwriter tune.

The specific, transcendental rock sound that Freedream sticks to for most of Elemental Art represents how they stand sovereign over their craft. An interesting addition is the four-song EP of various remixes to songs on this album that followed its release. It’s a total flip from the original score but could almost sit as its own piece. Regardless, these recordings are sewn in harmony, seemingly producing the exact album they wanted to release. –Kenz Waldon