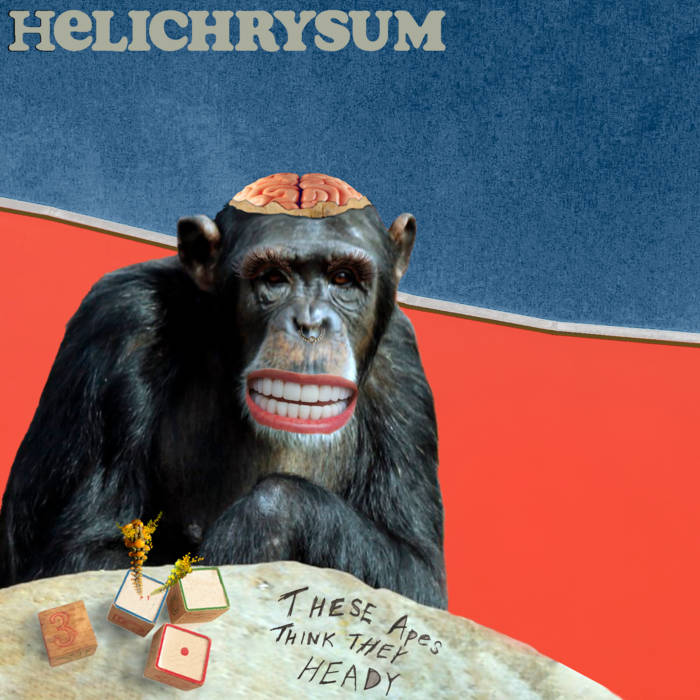 Helichrysum
These Apes Think They Heady

I used to spend a lot of time searching out drugged-up music. Thick with filters, special effects and some of the strangest transitions I’ve ever heard, Helichrysum’s newest release, These Apes Think They Heady, definitely fits the bill. Each song is like a mash-up of three different songs which transition back and forth on a dime, similar to the erratic style of Not Blood Paint. Despite the chaos engendered by these rapidly shifting motifs (or perhaps because of it), Helichrysum have put together an incredibly enjoyable album which is undoubtedly the most unique release I’ve heard this year.

If I were to take a guess, I would say that Tate Grimshaw, the band’s composer, has too many musical ideas for his own good. Each song on These Apes Think They Heady is a short escapade through multiple genres—jazz, hip-hop, blues and funk all show up for brief stints before abruptly cutting to the next style. The journey is a fucked-up one, with more than a few head-scratching moments, but somehow it all grooves cohesively. Backed up by some superb drumming from Chris Shemwell and the versatile vocal capabilities of Tai Lauti, it honestly seems like there isn’t any style the band couldn’t nail.

Helichrysum have an ingenious take on how to produce an album. The songs here are short, averaging barely over three minutes each. The band  isn’t afraid to get weird either. For example, “slurpi” highlights the sounds of someone’s mouth as they sensuously sip on a drink for 40 seconds. Throughout the album’s intro, “Turtle Boi,” I had to check my music player multiple times to make sure it was working correctly, as it sounds as if everything is glitching out as flute licks give way to drippy hip-hop chords which in turn give way to confusing, echoing vocals with a shit-ton of sound effects in between. The rest of the album follows suit (though perhaps a bit more coherently) and had me giggling at its absurdity as I was head-pounding with its groove the whole way through.

While These Apes Think They Heady isn’t the kind of album I’d recommend to everyone, it’s perfect for listeners who have an open mind and want to push out of their comfort zone a little. If you dig on avant-garde music, then this album would be an excellent use of your time and dime. If you’re on the fence still, you can stream the album before you pick it up over on Bandcamp! –Alex Blackburn