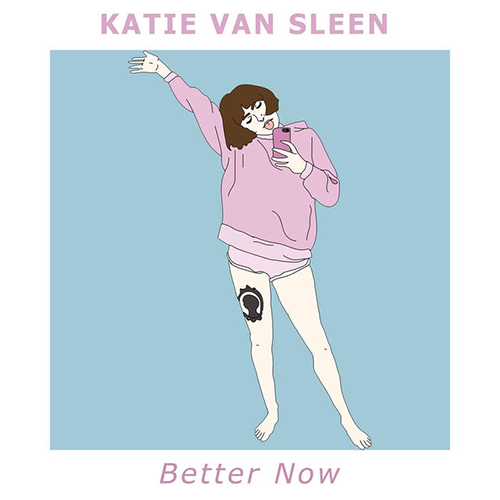 Better Now is Katie Van Sleen’s first solo recorded body of work, though it’s not accurate to think of Van Sleen as a late bloomer. They’ve been performing since their high school days, playing everywhere from Kilby Court and Diabolical Records to the Utah Arts Festival. SLC DIY music fans may also recognize Van Sleen as vocalist/guitarist in local pop-punk band Baby Pink. As they transition into owning their own musical space, Van Sleen stands ground with discerning, first-person accounts of both loving and loveless tales of punk adolescence.

In “Hangover Song,” Van Sleen muses, “You are sadder than me / So I am trying to be better for the both of us.” The protective yet self-deprecating sentiment points to Van Sleen’s ability to shrug and move on, choosing instead to find humor (if a little dark) in the present.  As they recall small-town run-ins with exes and other traumatic and/or awkward events, their stripped songwriting brings a surprising sense of lightness, pointing to the bittersweet freedom that comes with being young. They add in title track, “I was stupid / And I loved it / And if I could I would do it all again.”

Van Sleen brings a clear voice, both lyrically and vocally. Though they don’t belt out from the bottom of their soul and the musical arrangements are unadorned, the six-track album leaves a distinct taste of Van Sleen’s worldview. In “Hate,” Van Sleen notes, “I hate liars and I hate cheaters and I hate that I’m both and not neither.” This mature self-awareness is charming, as is their seasoned capability of living with loss—Van Sleen may walk with ghosts, but at least they make the best of their company. – Anna Ruby