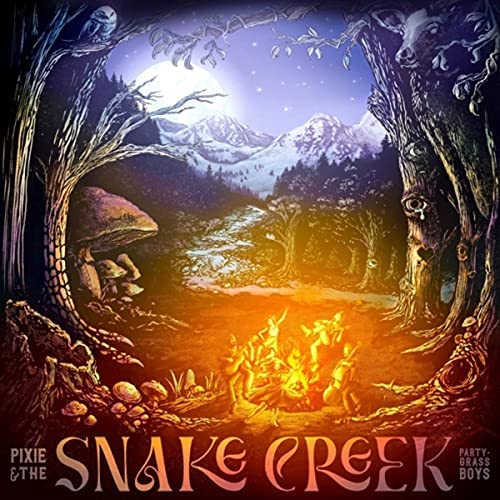 The walls that used to hold music genres in are collapsing. The cracks started long ago, and music sub-genres are everywhere. Folk music at one time drifted around the edges and protected itself from any kind of change but is now showing up in places once foreign, unfamiliar and unimaginable—you can hear folk elements in everything from pop music to black metal. Utah-based band Pixie and The Partygrass Boys push the envelope to party, punk, pop, bluegrass and funk. On their new album, Snake Creek, the formula works perfectly. PATPB spin like a perfectly balanced top. Singer Katia Racine (the Pixie in the band name) is more than confident to be that center point while her incredible band whirls their magic around her.

Racine’s vocals explode out as a smoke and whiskey–sounding treat, one part haunted and another part “get off your ass and move.” Racine is backed by elite musicians: Amanda B. Grapes (fiddle/vocals), Ben Weiss (vocals/mandolin”, Andrew Nelson (guitar/vocals) and Zach Downes (bass). On Snake Creek, PATPB takes no prisoners, moving from straight-up traditional to a speed violin that cuts every time it takes off, and Grape often lets it. The mandolin, the acoustic guitar and the banjo do the same damage, all battling each other in a ‘‘Devil Went Down To Georgia’’–style duel. Every song ignites like a gas fire. Downes has the difficult task of holding down the bottom, and he more than holds his own. The best example of how this tempest builds is in the song “Flames.” Everything is in its right place, with every instrument building up slowly then exploding all at once.

There is a tradition of great songs about The Golden State, and Snake Creek adds to that cannon. “Baby you can get high here / You can get stoned,” Racine sings on “California.” “I’ll never write another song about you / Let me tell you why / I won’t give you the sick satisfaction / That you’re still on my mind.” Racine rips through this song before allowing it to slip into a beat box—a hint of skat and whistling. The song ends with more dueling string arrangements that scratch at the walls. PATPB jumps from California to Utah with the track “Come November,” an ode to ski season: “I’m going home come November / In the mountains I may roam / I’m going home come November / Chasing the winter snow.”

PATPB let their inner hippie out on songs such as “Digging The Greenhouse,” “Bear Shark” and “Wolf Song.” Racine pulls a fast one on the track “Ballad Of A Thin Dog,” singing, “I have a story / It’s not a sad one / But a glad one,” continuing, “This is about my dog / I’m so sorry I wrote it / So you’d ask to see his pictures on my phone.” There is a lot of tongue in cheek on this record, and Racine pulls it off with a wink. Pixie And The Partygrass Boys are the bluegrass version of Fleetwood Mac, and Racine plays that dark witch as good as Stevie Nicks.

Snake Creek is a house for some great songs. This is a great record, but make no mistake—this is a live band that needs to be seen. Support local, support this band and see them live and rock your guts out. –Russ Holsten