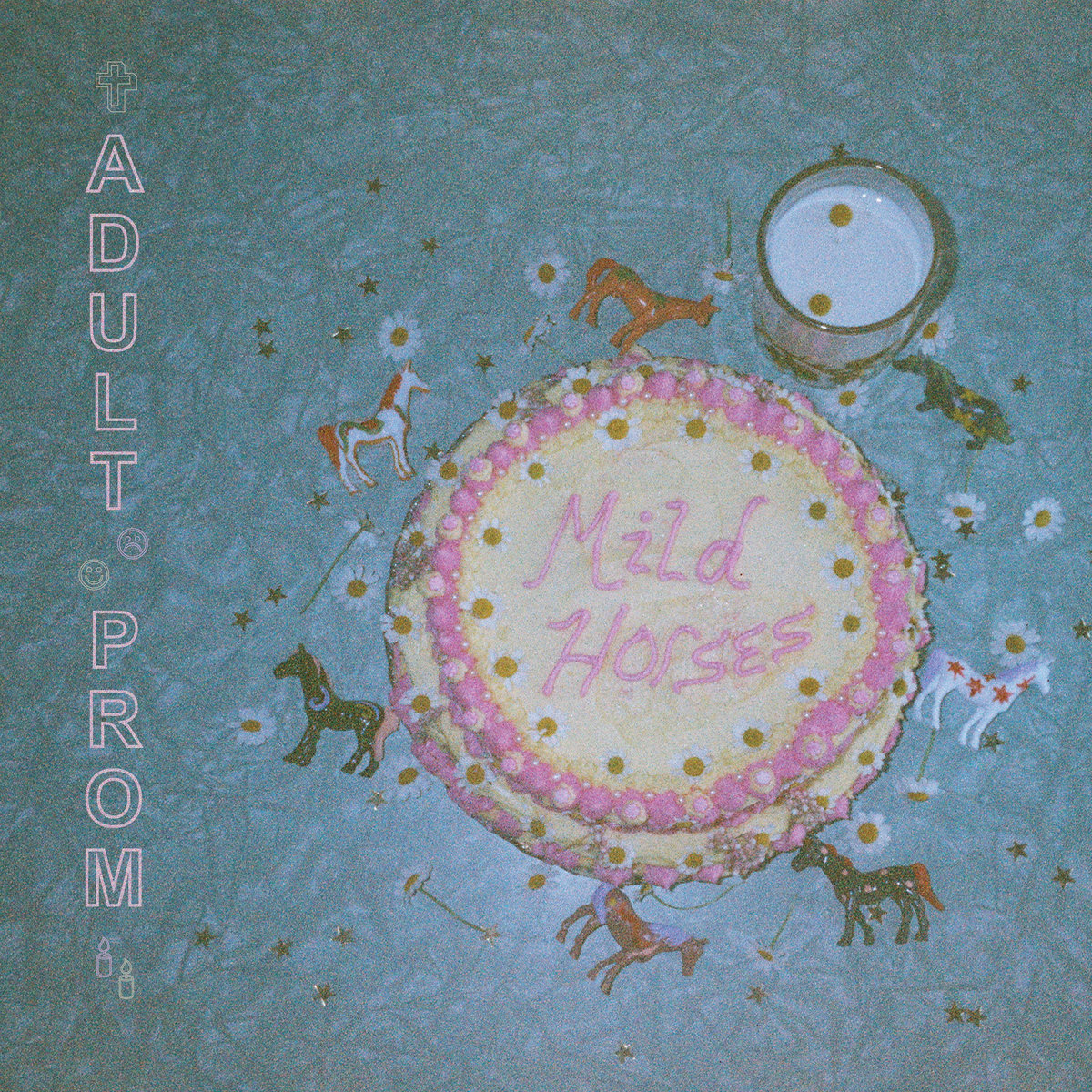 Salt Lake City–based indie rock outfit Adult Prom are making an already lively local music scene even more exciting with the recent release of their debut album, Mild Horses. Russ Allphin is the man behind the name, impressively playing all the instruments for Mild Horses except for drums and synths.

Mild Horses is a huge improvement on the group’s self-titled 2019 EP, with bold, easy-to-listen-to vocals that allow Allphin’s poetic lyrics to deservedly stand out more. On the album, which was delayed for a year due to the pandemic, Allphin dives deep into the pains and joys of transitioning from one phase of life to the next. When Allphin first started recording as Adult Prom, he says, “I’d recently gotten married, finished school, while simultaneously completely phasing out of my religion. I felt I was finally becoming my true self. [The album is] just a weird diary of the last five years of my life, the good and the bad.”

Mild Horses begins strong with the attention-grabbing and bass-forward “Hope You Are Well,” which is about Allphin’s process of leaving the The Church of Jesus Christ of Latter-day Saints. “I think this song sums up my feelings about how I acted and how I was treated throughout my life as a member,” he says.

When he was writing the song, he looked up above his desk at a signed postcard from the music artist Calvin Johnson that said “Thanks Russel! Hope you are well! Enjoy!” He didn’t take it personally that one of his favorite musicians misspelled his name but while in the headspace of writing this song about leaving the church, the postcard felt representative of his experience. “Giving over all [your] time to an organization that in return doesn’t really care who you are or what you do,” he says. “I just always felt very unknown, alone and under-appreciated as a member.” The chorus of “Hope You Are Well” is direct and confident, clearly communicating Allphin’s message. “So thanks Russel (one L) / Hope you are well! / Stay dumb, mendable and soft / And kindly fuck off.”

The song “We” is mysterious and spacey sonically, with Allphin ruminating in terms just specific enough for the listener to relate but obscure enough to remain poetically intriguing. “We grab the world by its balls / Rip its heart from its body and bathe in its blood / When we get stuck on a track / We’ll dye our hair dead, cut it, then grow it back.”

Lead single and my favorite song of the album “Baby You’re a Star” is an accessible indie rock track that would fare well as background party music, but you would be remiss to not look deeper into the personal lyrics. “That song is about the struggles of compromising your character in order to fit in when deep down you know that it’s a futile effort and that you should just be your true self,” Allphin says. The first verse showcases the issues with this mindset and the influence of others around him: “If I never see it / I’ll never believe it / If I don’t believe it I can pretend I do / What a beautiful mindset / With a couple of regrets / And I can be anyone other than myself.”

“Lurv” is the best candidate for a genuine love song, as Allphin voices that he will try to understand and support his significant other. “There’s nothing you can say that would deter / My love / Nothing disturbs / My love.” On “Mmm,” the listenability of the album doesn’t stop, as Allphin sings in a calming, dispirited voice, “Don’t know how It got this far / Riding my luck on this here shooting star / If I had just one more hour / I’d spend it all on you.”

Mild Horses continues to impress with the blue but still catchy “Til I Break Down In Tears,” where Allphin describes his loneliness in an emotionally poignant way: “I will laugh, I will cheer / Till I break down in tears / What’s the point of having friends / If I don’t want to see them?”

Allphin finishes the album with the six-minute title track. After over a minute of instrumental build up, Allphin begins his verse with ponderous lyrics. “Do you find that sometimes / It’s hard to wrap your head around your mind? / When you feel like you could pin it every time?” Eventually, the song soars into a towering chorus that is sung passionately but disheartening in sentiment. Allphin is accepting the difficult reality that life, especially as you make it through your 20s, is full of change and struggle. “I think that song overall is just about perseverance in the face of shitty times,” Allphin says. “It looks like life is exactly what it seems /Look on the brightside! /A nightmare is still a dream.”

Perhaps Mild Horses is the beginning of a wave, a sign of what is to come in the Salt Lake music scene. What’s impressive about this album is it strikes a balance between accessible music you would proudly show your friends and a complex piece of art that takes time to understand. The more you listen to Mild Horses, the more you hear Allphin’s deeply personal and honest lyrics that wouldn’t look out of place in a poetry book. Mild Horses is intriguing, but it’s so much more than that—this debut album feels like a fresh breeze of relatable indie rock that you don’t have to try hard to like, ultimately showcasing the genuine talent of an artist in Adult Prom that should make the entire Salt Lake valley excited for Allphin’s career. –Andrew Christiansen