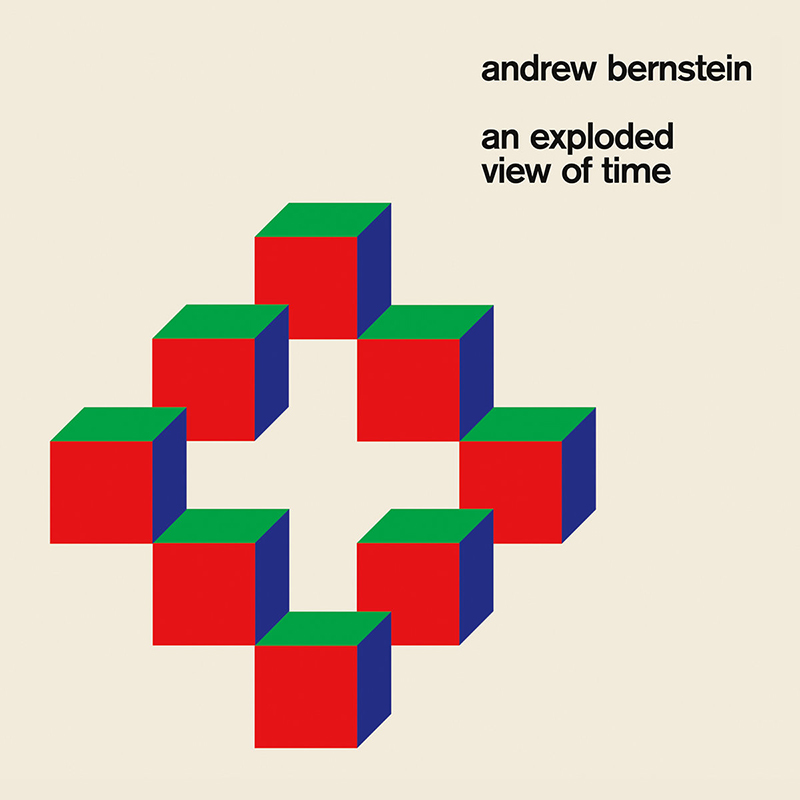 The saxophone carries a load of baggage. Even though—relatively speaking—it’s a somewhat recent addition to the instrumental pantheon, its place in 20th and 21st century music is massive and difficult to ignore. The instrument was present for, if not crucial to, some of the most significant developments in contemporary music. In styles as diverse as jazz, rock, minimalism, no wave, free improvisation and drone, the saxophone has played a key part in the ever-developing musical landscape of the last 50 years. With all this backstory, there’s a lot of context that inevitably predates Andrew Bernstein’s new album of solo saxophone material, An Exploded View of Time.

His take on the instrument is far from a bland rehashing of familiar techniques. The actual music is a fiery set of repetition-based performances. Save for a few rare moments where Bernstein pauses to inhale or switch gears, there’s virtually no breathing room on An Exploded View. Bernstein employs a circular-breathing technique, which allows him to play for long, near-constant periods of time without stopping. This gives the music a brick-solid texture, and there’s certainly some barriers to get over when picking apart the fast-moving music. On the surface, it reads as disorienting—deeper, it showcases the power of Bernstein’s aggressive approach to solo performance.

Tracks like the opener, “Vesica Piscis,” and “Boogie Woogie Phase” are the most steeped in circular breathing traditions. Fans of Colin Stetson will find familiar material here, with Bernstein using slight variations on repeating scalar motifs to build dense, nuanced pieces of music. If you’re not listening closely, it’s easy to miss the subtle changes that give these tracks direction. A subtle shift in downbeat emphasis or changing one of the many chord tones can have drastic effects, especially as they disrupts a feeling of trance-inducing repetition.

Other times, particularly on the second half of the album, Bernstein moves past the fast arpeggiations and digs deeper into the possibilities of the limits of his instrument. “Pressure Wave Meditations I – XXIII” is a study in development and volume, with the slowly accumulating melodies being played out across the saxophone’s dynamic range. Sometimes the notes are whispered, breathy blips; other times, growling multiphonics. One of the most distinctive moments is the shortest track, “Dust.” Bernstein explores the limits of tension here, with the series of increasingly grating tones and multi phonics offering a wonked-out, delirious atmosphere.

Even though there are plenty of elements on An Exploded View that seem to reach beyond the human body’s connection to music making—the marathon circular-breathing work, the inclusion of computer algorithms on “Deus Ex Machina”—Bernstein isn’t necessarily reaching for any form of transcendence. On the closer, “Round Up,” Bernstein goes the furthest to show where his roots lie. The track still features the squealing tones and puzzling rhythms that identify the album, but it’s all based around a curiously catchy melody. Buried beneath the blistering runs is a folk-tinged tune that almost resembles something that Ornette Coleman or Albert Ayler would’ve searched for on their early forays into “out-there” jazz.

An Exploded View of Time is not a reinvention of the saxophone as much as it is a strange sonic history. Bernstein’s approach, while clearly indebted to certain styles and players, resists any cornering into a singular style. His playing is bold and forthright, wasting no space on this lean album. –Connor Lockie