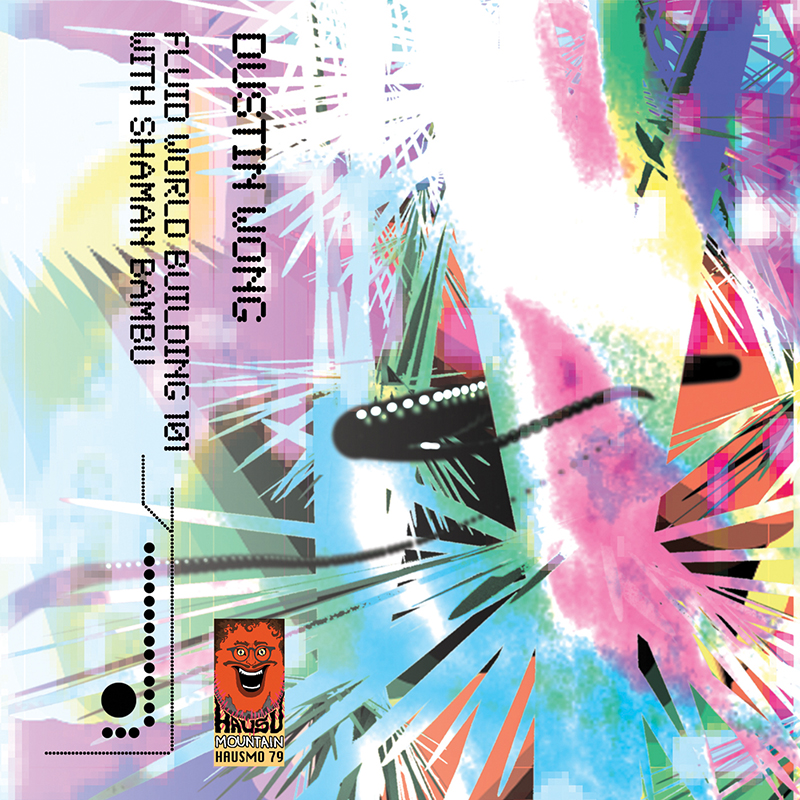 The latest from Chicago-based experimentalists Hausu Mountain finds avant-rock musician Dustin Wong shifting his sound to fold into the label’s typical stylings. Unlike his work in the blistering prog outfit Ponytail or the chilled-out funk of his collaborations with Takako Minekawa, the music here takes on a colorful, sugar-coated sheen. Fluid World Building 101 With Shaman Bambu is nothing if not flashy. It often praises chaos over order and more over less, pushing nearly all of Wong’s ideas to their manic breaking point.

On most of the tracks, Wong forgoes easily discernable structure in favor of a stream-of-consciousness rush through layers of improvisations and disorienting loops. From the first track, “Nite Drive With Shaman Bambu,” Wong makes clear his love for vertical stacks of sounds instead of horizontal spatializing. Based around an ever-evolving, quasi-tropical groove, Wong piles on pitch-shifted guitars, electronic percussion, warped vocals and other sounds for a shapeshifting seven minutes. Often, this mass of instrumentation combines all at once, and the task becomes trying to pull any one focal point out of the crowded picture.

Because of how overwhelming the clutter can be, the most successful tracks are more spaced out and feature more economically arranged instruments. “Village Made of Zephyr,” in particular, has a welcome airiness. All of the elements that showed up in “Nite Drive” are here as well, but used more sparingly and with more apparent attention to interplay. There are languid melodies here, as well as dramatic chord changes—something that can get lost in the muck elsewhere.

When the air clears, the twisted fusion roots of much of the music on Fluid World Building shows themselves. If you’ve ever listened to Wong’s work with Ponytail, you’d know that he’s a highly skilled musician with a knack for merging memorable melodies with mind-bending guitar workouts. Here, that technicality is present, but it’s often combatted by a goofy electronic line or a kitschy video game aesthetic. “Dawn Thru the Marble Parthenon” pits clanking percussion samples and shimmery synths against rich guitar harmonies, making for a moment that sounds like the offspring of Bill Frisell and Super Mario Sunshine.

All this madness makes the album’s centerpiece and immediate standout, “はずかしがらないで (Don’t Be Ashamed),” feel like even more of a shock. The winding guitar solos and disorienting rhythms fall away, and a bonified pop tune emerges. The combination of plucked string counterpoint, Wong’s intimate delivery and a cosmic synthesizer solo to round the whole thing out make “はずかしがらないで (Don’t Be Ashamed)” a moment of truly ecstatic music.

Wong lives up to his promise of constructing his own reality in that it seems to have little reference to or patience for the outside world. The best way to digest the music, then, is to meet it on its own terms. Following the advice of the final track, titled “New Societies Interacting, Let’s Zoom In,” the music works best when it’s studied like a set of data. If you hyperfocus on “World Builder Imagines a City,” what seemed like the musical equivalent of rainbow vomit turns into a densely interlocking puzzle of seemingly at-odds ideas and gestures. Lean back, and everything muddles. Though it sounds cheery on the surface, the reality of Fluid World Building is some deeply complex and difficult music. –Connor Lockie