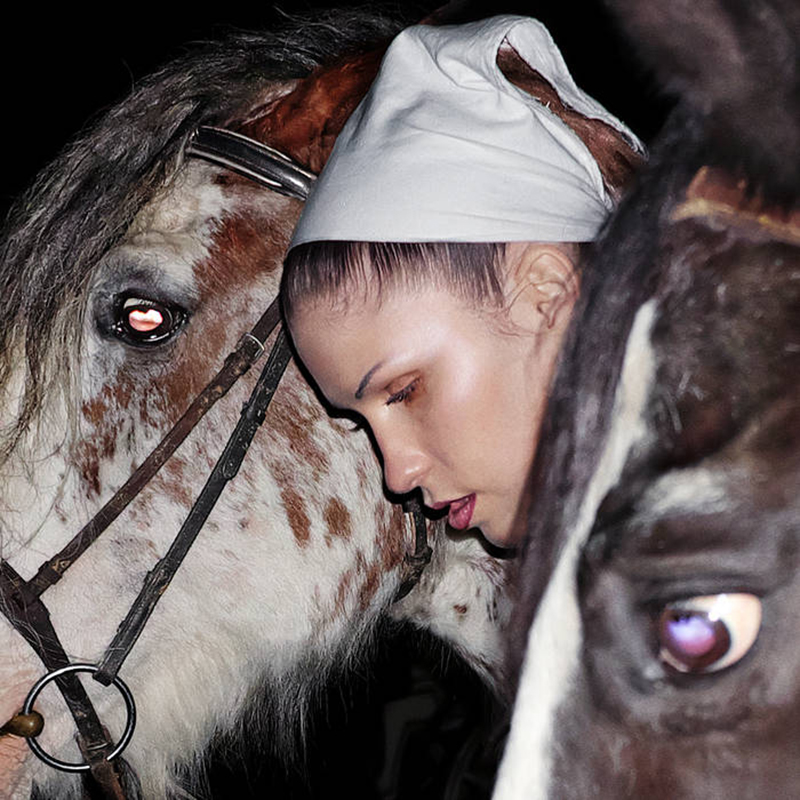 “I like to customize my style. You can’t buy this, suck my bile.” These lines show up around halfway through “Inclined,” one of the singles from IRISIRI. In barely a dozen words, Alexandra Drewchin exposes a lot about the album: abhorrent of consumer culture, committed to a self-made aesthetic and drawn to a specifically medieval sensibility. Thankfully, IRISIRI is just as strange as this line and these themes would predict, as its music is an uncompromising take on the melding of songwriting and experimental sound design.

The bulk of the album’s front half consists of shorter, more abstract compositions. The music floats along in the form of a warped collage, pinning sounds from different places, genres and centuries against each other. “Not Worried” mixes delicate banjo plucks with incessant electronic drums, while “Curtains” is a harp cadenza accompanied solely by rave synthesizers. In any other context, these far-reaching experiments would feel too scattered to reach a sense of cohesion. The more she enters musical territory that seems contrary to standard practice, however, the more the similarities between these sources merge.

Towards IRISIRI’s back-end, the music stretches into expansive tracks. “Switch,” with its ghostly choir and eerily spacious drum programming, offers one of the first moments of weightless ease on the record. This respite ends once the alien funk of “Trespasses” begins. Easily the most abstract cut here, Drewchin fills the space with an alternating combination of buzzing synths, cavernous percussion and solemn, chant-like singing. In the same way that OPN’s R Plus Seven and Holly Herndon’s Platform found spiritual depth in the shallow world of the Internet, Drewchin reinvents religious ecstasy for a secular society. Replacing those albums’ kitschy sheen is a disturbing physicality. Drewchin’s voice alone pushes the limits of the human form: It shrieks at the top of its range, it groans and cracks at the bottom. The body behind the music never fades into the ether—it’s always present and breaking in full focus.

After these two longer, more subtle tracks, Drewchin elevates her energy to thrust the album into its final moments. “MMXXX” boasts a Moor Mother feature, and fittingly rejects the temperate atmospheres of earlier tracks in favor of thumping, direct music. From the sirens and breaking glass that open it, the duo present a feeling of distress and action. Drewchin’s squeals and shouts are wonderful, but Ayewa’s contribution is the real star. Lines like, “Gravity can’t limit me and my orbit,” and “You can get your arms and your legs ripped from your body then handed back to you like ‘Keep the change, traitor,’” perfectly fit the violently grotesque, medieval-turned-cosmic personality that IRISIRI oozes.

The following track, “C.L.I.T.,” is easily the most outwardly aggressive track on IRISIRI. The pile of bright distortion is the perfect backdrop for Drewchin’s refrain, which could be the mission statement of the whole album: “Yeah, I rejected the culture. Do you blame me? No.” Delivered in a passionate, boastful cadence, it feels like Drewchin’s victory lap. It’s the anthem for when she stands atop a mountain of skulls as an accomplished warrior.

Drewchin’s twin releases from 2015, Metalepsis and RIP Chrysalis, suggested that Drewchin’s solo music would lean toward experimental folk. Here, any predictions fall flat, and the result is an album that exceeds the expectations of her or any other artist. Track after track, listen after listen, IRISIRI eludes conventional analysis or understanding. Antithetical to history and conformity, Drewchin’s music imagines a world where this music is the convention, not the outlier. It’s unclear whether this takes place in the past, the future or the alien present. Regardless this grimy, transcendental music is glorious. –Audrey Lockie