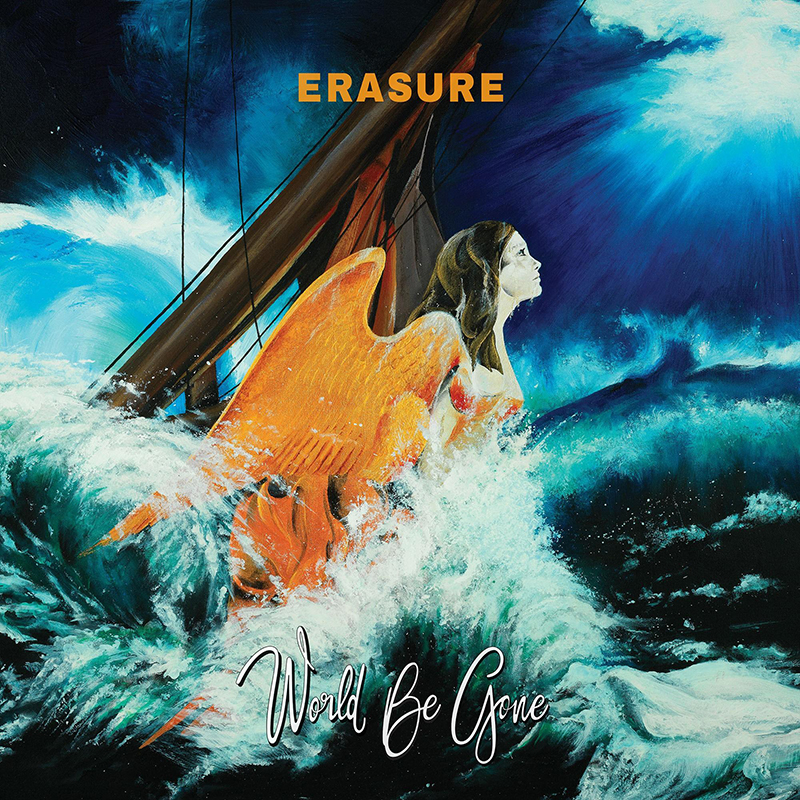 “We Made A Miracle”: Erasure – World Be Gone

As last year’s career-spanning opus boxed set From Moscow To Mars demonstrated in spades: After 30 years of making melodic pop, the 16 previous studio albums presented by Vince Clarke and Andy Bell have been wildly varied and unique. In the simplest terms: They’ve never repeated themselves. After 2014’s well-received pop epic The Violet Flame, the synth legends proclaim what could be termed its antithesis, World Be Gone.  Upon learning of my good fortune in receiving a promo of the album in advance, good and well-intentioned friends were eager for my take, especially with the enduring charms of The Violet Flame lingering in their musical minds. My initial thoughts were “melodic, pretty, gorgeous,” and despite ensuring them that I thought they’d truly love it, most responded that it sounded “slow.” Well, it is that in parts, but it is also reflective, thought-provoking and ultimately redemptive. In fact, this may be the duo’s most personal song cycle ever, which in itself is quite a statement for their 17th album proper.

What a unique gift for Erasure fans this album is! It isn’t just that Clarke and Bell know how to make an album, it’s that this is their first self-produced, full album release—after a handful of B-sides and co-producing credits over the years—and it is executed with an intricate skill, élan and a fierce restraint. Those looking for a pop hook need not look further than the arresting drum beat that starts the infectious album opener and first single, “Love You To The Sky.” The drums sound live and bolster Bell’s dramatic vocals, building up to another wondrous chorus. Musically, it is the most traditional sounding Erasure track—just as closer “Just A Little Love” to a lesser degree is—here. The ominous “Be Careful What You Wish For!” is more representative of the overall musical theme, but repeated listens reveal one of the album’s many highlights: the sublime layering of Bell’s background vocals.

The otherworldly title track is divinely pretty, and Clarke’s soft embellishments create gentle ripples around Bell’s dreamy voice. “Though it hurts to say goodbye / Silver linings in the leaden sky / one day we’ll return again / and surely we will make amends,” he sings, with a detached beauty. The great drums return for “A Bitter Parting,” and Bell’s voice is defiant and sure, as those aforementioned background vocals create a chant-like chorus behind him. The thrilling intro Clarke creates for the dramatically monumental “Still It’s Not Over” bolsters one the album’s greatest call to arms. Political, historical and rebellious all at once—with Bell chillingly reflecting his own struggle for his rights not only as a gay man, but also as an HIV positive one—it’s the bridges and chorus that, like a liberating siren song, call the listener back for repeated listens.

“Take Me Out Of Myself” is highlighted by Bell singing over himself intimately and ironically about the unease inside his head: “Please talk to me as if I’m equal / Fear of rejection’s hanging on,” he confesses as Clarke pulses gentle tones around him. The darker chords of “Sweet Summer Loving” initially signal a potentially darker tale, but it is Bell’s ever-soulful vocal performance and a positive chorus that morphs the track into a love ballad of sorts. Even though they are not often recognized for it, the duo’s experimental side runs creatively amok in “Oh What A World,” and Bell’s monochromatic verses are yet another call to arms. He sounds subversive and trance-like, and then his honed vocals arrive for the bridge and are especially paradoxical with the ironic line, “What became of wanting to be free?” before effectively repeating the title.

Those lovely gospel-like vocals by Bell effortlessly highlight “Lousy Sum Of Nothing.” Awash in Clarke’s delicate dreamscape, his ruminations about our uncertain world are perfectly balanced in this cautionary ballad of the dangers of being too complacent.  If this pessimism sounds hopeless, closer “Just A Little Love” is uncompromisingly optimistic. The rejuvenating theme here is hard to resist, and this could easily be a forthcoming single.  It would be wonderful to also see something as powerful as “Still It’s Not Over” or “Lousy Sum Of Nothing” obtain a potentially wider listening audience—via potential single releases—because of their alluring messages.

Like any new album presented by an established artist, what one makes of these songs—especially intimately—will be left to their own interpretation. Given multiple listens, the beauty and joy found in Erasure’s music (which seem eternally synonymous with the band) shine through.  The album’s cover painting—and that lovely font from the Wild! album era—is perfect and neatly mirrors the message of hope breaking through in these bleaker times. Ultimately, these songs brew like a quiet storm, but there are also many edifying moments that contain the rebel yell. Clarke and Bell may remain pacifists at heart, but present an abundance of defiance and, fundamentally, an electrifying call to arms.  More importantly, World Be Gone proves the duo—rivetingly—still has much more to say. How lucky the pop world is for that!

World Be Gone is available in a wide variety of formats (like orange vinyl and cassette tape) and various bundle options and if you order the CD or vinyl there before April 7, your name will be printed in the album’s credits. World Be Gone officially releases on May 19 via Mute. –Dean O Hillis