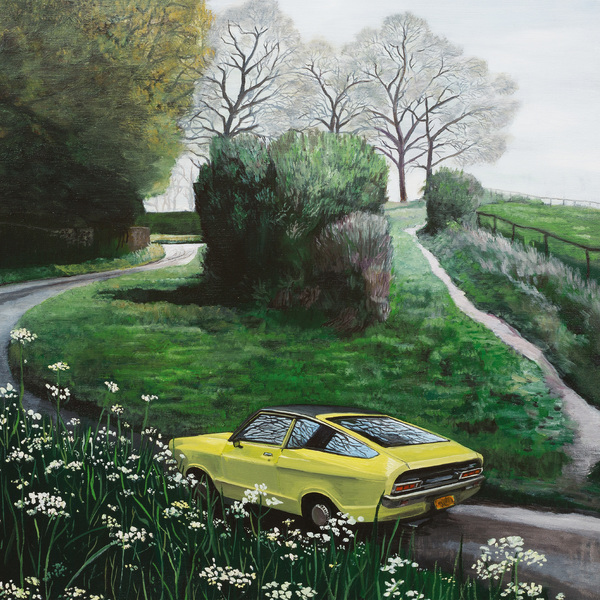 Based solely on their past work, crys cole and Francis Plagne have little in common. The former is a sound artist who often works in manipulated field recordings and found sounds while the latter toys with song structures to make evocative experimental pop. Two Words then, is an anomaly of cohesion: Even though the single half-hour track is broken up into two wildly different halves, the whole thing feels like a single piece with a few driving goals. Plagne and cole force the listener into a strange mirror of reality where free associative connections and half-baked significations are the closest thing to a coherent meaning. Wonder, rather than definition, guides the music.

Even though cole and Plagne are using a complex sonic, linguistic and structural language, Two Words favors experience over analysis. The specific techniques and processes the duo employ are less important than how the finished product affects listeners. Knowing that the first half is built primarily out of recordings of rubbed surfaces certainly adds a degree of awe for the duo’s sound manipulation skills, but it’s just as fun to try to blindly search for recognizable sounds. Often the music almost sounds like a car engine or buzzing insects, or you can convince yourself that you’re hearing recorded breaths or lapping water. It’s a masterpiece of collage music, and here is the first iteration of the idea of creating music on the verge of intelligibility.

After a seamless transition, the second half of the track focuses on Plagne’s voice and a cycling organ progression. Using lyrics based on a text by Marty Hiatt, the music guides the listener through a series of two-word phrases that subtly connect to form a fuzzy picture of a meaning. Other than an odd split into a ping-ponging stereo effect towards the end, Plagne’s delivery is flat and repetitive. He sings phrases like “concrete Tuesday” in the same nasal tone as he does “immigrant chronicles,” and only through the relations between phrases does the text make any sense, even if only slightly.

The most stunning moments in this section are the ones where intertextual connections are able to offer a sense of relatable narrative. There are moments where Hiatt’s text uses its economy of language to present potent commentary, as when Plagne sings, “Christopher Columbus / border crossing / Australian passport.” In this brief phrase, the music draws harrowing connections between the history of European colonialism and the globalized travel industry. However, the text greatly ranges in seriousness. Only a few minutes later, the mood shifts completely when the text turns to puns: “Blue notes / grass notes / bluegrass.”

Mashing up political criticism with humorous wordplay runs the risk of turning the whole thing into a giant farce, but cole and Plagne’s music feels more like a honest picture of being stuck in a world of growing confusion and disorder. Plagne’s final phrases offer something of a key to an album that has no secret to unlock: “Picture primitive/pell-mell.” Both in the more abstract sound art and in the song-like second half, there’s a sense of a chaotically constructed narrative coming together. For how disjointed and alien the concept of this record seems, it ends up feeling deeply personal. The human touch that made this music is always present, and the application of the word “primitive” is only good insofar as describing the completely uncharted territory within which cole and Plagne are creating. –Audrey Lockie