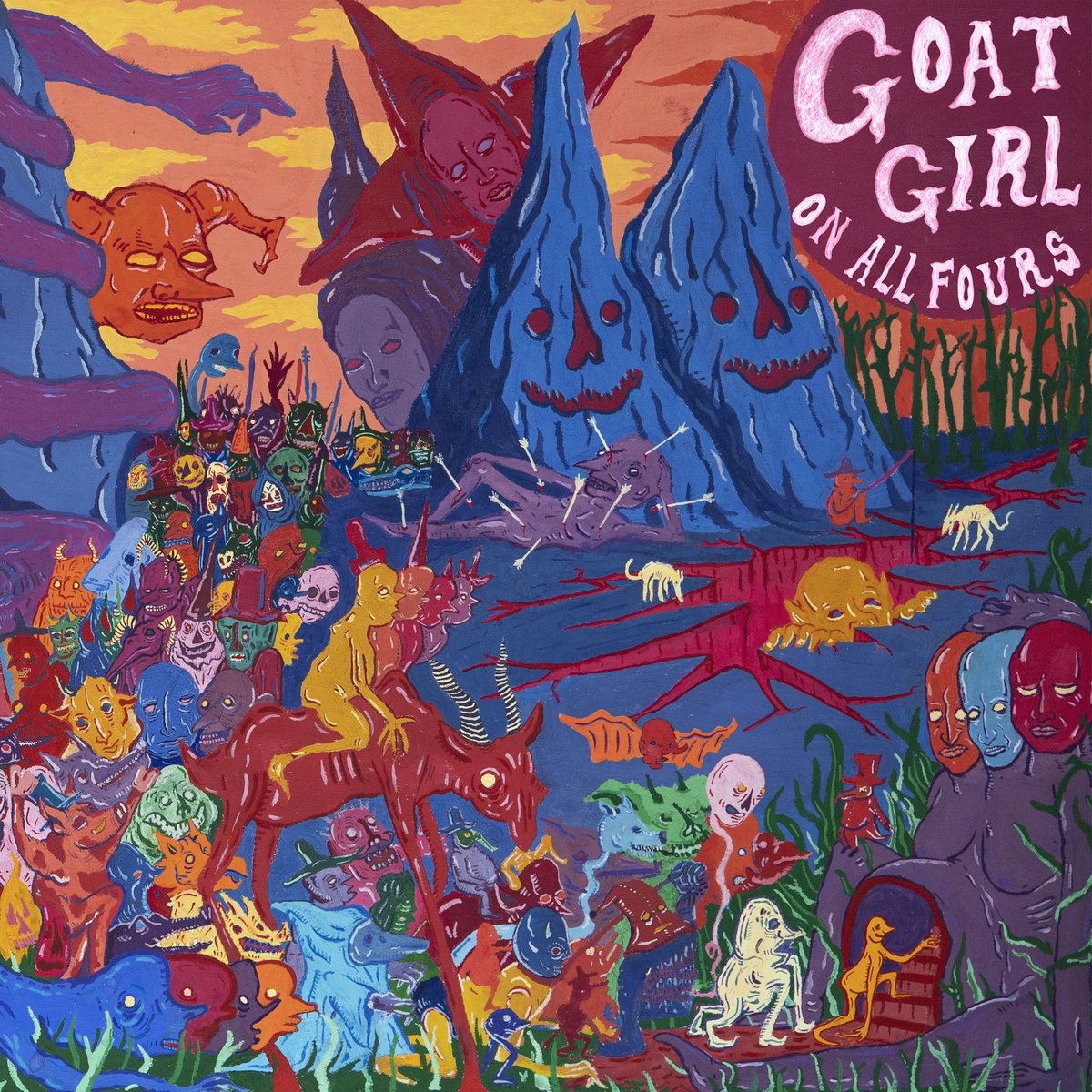 Review: Goat Girl – On All Fours

Goat Girl
On All Fours

With stage names as spunky as the tunes they create, London-based musicians Lottie Cream (sometimes referred to as Clottie Cream), L.E.D., Holly Hole and Rosy Bones’ sophomore release as Goat Girl showcases a more fully realized band. While their self-titled 2018 debut oozed a brooding, “gothic country” atmosphere, On All Fours blends experimental synthesizers and analog electronics with sunny shoegaze, a dash of punk and pointed lyrics for an angstier, more vulnerable listen.

Droning on about grievances in a relaxed, unaffected way, Cream and L.E.D.’s vocal styles bring to mind a conversation with, say, an unamused barista or your one impervious friend who isn’t afraid to speak their mind. The two vocalists croon about uncomfortable and sometimes nauseating topics in a similar fashion, delivering lyrics about the climate crisis, anxiety, discrimination and even scabies with a detached matter-of-factness.

There are three things the members of Goat Girl very obviously despise: global warming, the patriarchy and Prime Minister of the United Kingdom, Boris Johnson. “Carry on / Like we’re protected / As if / We’re unaffected,” they sing about the Earth’s impending doom on “Badibaba,” while “The Crack” imagines a post-apocalyptic world in which humans flee a dying planet for a new home in space. “The crack was singing protest songs / The people wouldn’t listen; they didn’t care / They were singing worship songs,” Cream rebukes.

“P.T.S.Tea” chronicles the time an unsympathetic man spilled a cup of boiling hot tea onto Bones, resulting in third-degree burns and cancelled gigs. “Dumb man wouldn’t even look back at me,” Cream and L.E.D. sing on Bones’ behalf, before spiraling into a larger, frustrated conversation regarding gender identity. The most seething song on the album is dedicated to the Prime Minister, however. Sung in a melody fitting for Madame Thénardier herself, the gruesome lyrics of “Where Do We Go From Here?” read like a monologue from Les Misérables, forlorn and full of politically-charged disgust.

A step into the eccentric left-field, the 13 tracks that make up On All Fours still manage to be catchy and listenable. They’re whirlpooling and abrupt without seeming the slightest bit messy, but it’s still a lot to process. Even without leaning into the heavy substance of Goat Girl’s exasperated lyrics, the listening experience is psychedelic and, honestly, a bit tiring. But then again, so is the fight against global warming. And the patriarchy. And Boris Johnson. –Mekenna Malan