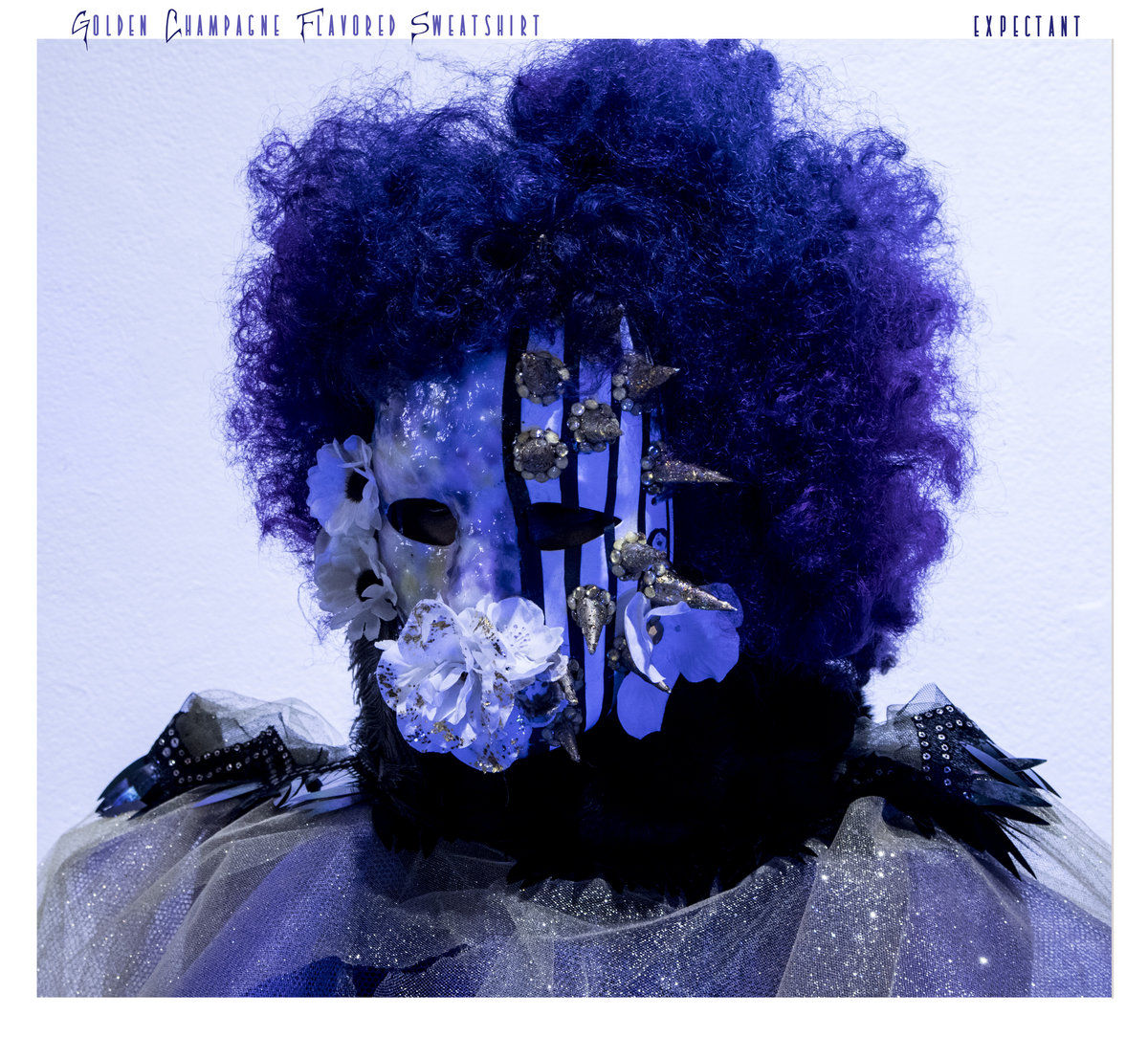 On Expectant, Golden Champagne Flavored Sweatshirt creates music that embodies anticipation. These seven tracks explore a perpetual movement and restless reconfiguration, stretching out the single moment just before something happens into winding tracks that often push past the five- and six-minute mark. Listening is like staring down a speeding train that neither halts nor arrives; like living in that constant state of almost-impact.

The pair of opening tracks, “3.26__” and “Horse Mouth,” immediately display this textural and compositional approach. Full of clunking percussion and brittle synthesizer drones, these tracks paint the entryway (quite literally, with the ceremonial chime hits that kick the album off) to the self-built atmospheres on Expectant. The descending synthesizer melody on “3.26__” feels like high-noir sci-fi against its dull, breath-like bass thrum, while the swirling torrent of effected wind sounds lying in the back of “Horse Mouth” counter the factory-line clamor of its percussion loop. Expectant wraps itself in this sound world that feels both futuristic and ancient, recollective and imaginative, refusing to mediate these contradictions and relentlessly accumulating dissonant tension before each track slowly disassembles and fades to silence.

While Expectant thrives on this sense of limitless ascent, GCFS buries the flow of constant, lateral evolution into these structures. On “Human Animal Chimera,” a trebly, dub-effected riff runs against walls of noise and gargled vocal snippets before the texture skirts between this combination, bass drum–heavy marching and chilling bits of airiness. Like a constantly shapeshifting body, the movements on “Human Animal Chimera” appear so totalizing and synchronous that single iterations might vanish in the space of a second, nearly imperceptible to the unfocused eye(ear). This music does lives in a world that treats release and arrival like the plague, but GCFS guides these stacked sonic characters into new forms with a patient, secretive push. Her motions create new beings in each passing single moment before the shape quickly morphs into further unrecognizability.

The spare inclusion of vocals (echoing speech fragments on “Horse Mouth,” yelps and screams on closer “Animals Calling Animals”) against these metallic backdrops offer a further complication of this music’s sense of place, and the pinnacle of these quasi-humanistic inputs arrives on “Whicket.” Atop a thumping, urgent beat, the spliced recording of a rapture-fearing pastor delivers a grim sermon: “The wages of sin / Is death … When you sin, somebody dies,” they warns toward the track’s finale. The emotional ambiguity of GCFS’ soundscape bumps up against this fiery religious moralizing, both buying into the satanism that the speaker condemns and amplifying the anger and pity of their admonishments.

At the center of Expectant’s alien coldness lies the gooey heart of “Sea Creatures” and “Pyroclasmic Flows.” While not entirely doing away with the album’s industrial flair, these tracks live deeper in the naturalism of GCFS’ world. On “Pyroclasmic Flows,” especially, the driving beat patterns mellow out and make space for walls of nostalgic synthesizer harmonies. The tenderness on display here relaxes the raised shoulders and locked knees of the previous tracks, letting the sound unfurl into a boundless sea of psychedelic pinks and blues and purples and golds. If much of Expectant revels in anxiety and tension, “Pyroclasmic Flows” stands as its most obvious admission of the beauty lingering in the dark corners of each track surrounding it.

Expectant asks listeners to enter into a sound world without direction or dimension. These sounds bleed across each others’ borders, tempering rises, negating expectations and reconstructing each moment’s singular body. Like this music, the feeling of lying in wait without tangible release or dismissal can often feel uncomfortable in its sense of perpetual unknowing. But once you settle into the subterranean cosmos of Expectant, the lifelike creatures humming within each track breed an awe-inspiring power. –Audrey Lockie