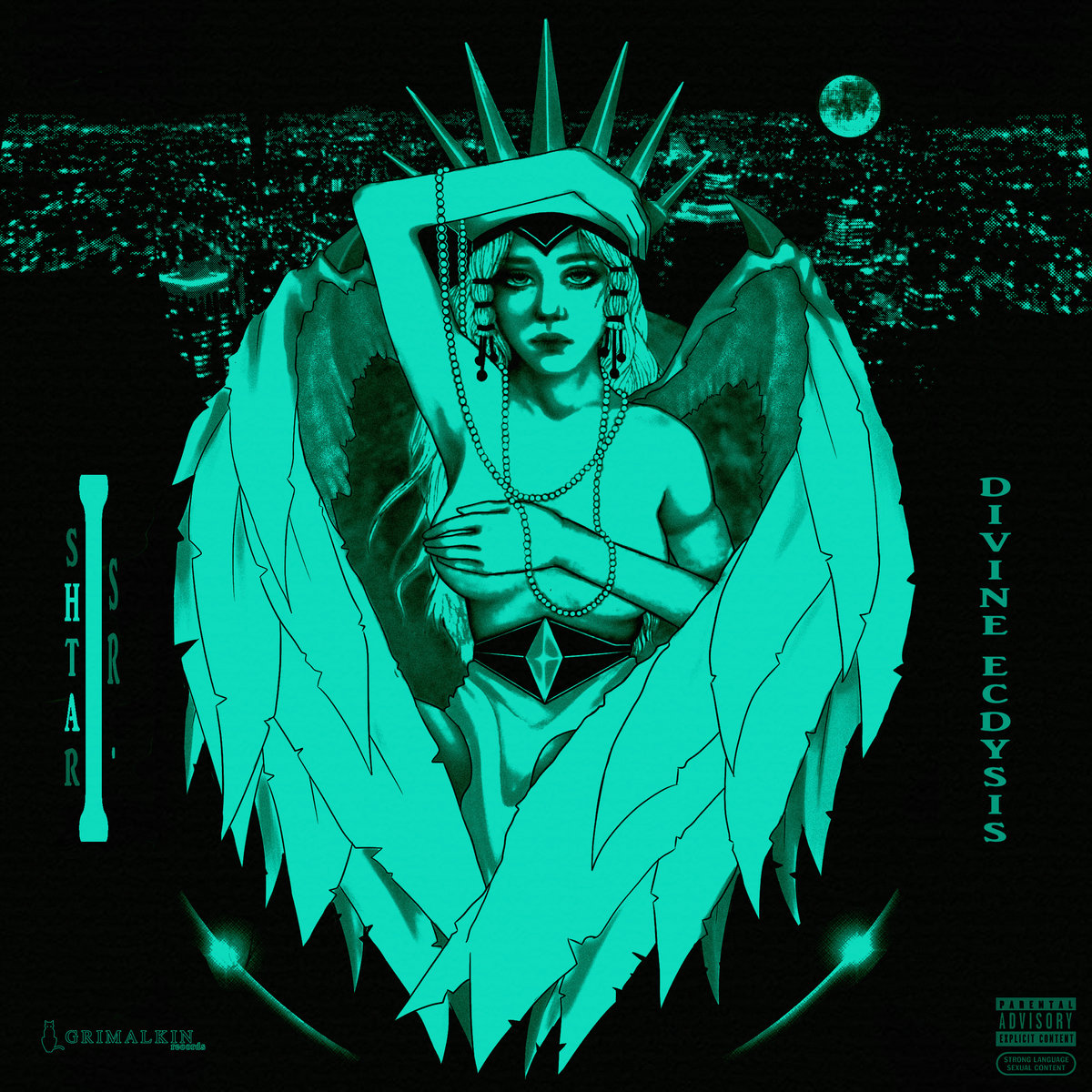 density&destiny—
in sound, narrative and concept, Ishtar Sr.’s (Savan DePaul‘s) Divine Ecdysis holds an almost unbearable concentration of weight and import. Best described as an avant-hip-hop space opera, the album narrates DePaul’s own journey toward a self-assured identity and expands the tale into a cosmic, posthuman tapestry. Carried by psychedelic synthesizers and percussion that sounds like rattling hunks of metal and bone, DePaul sits over the whole project like a faceshifting sage armed with an endless supply of vocal effects and no shortage of obscure historical, mythical and scientific references.

Rather than try in vain to hold together the album’s multidimensional metaphor, DePaul embraces the inherent scattered-ness of their journey and filters the core concept through a musical vision even more abstract and winding. The songs melt and shapeshift from one form to the next, from hip-house fire to dissonant sound collage in a second. On the stage-setting second cut, “2700,” a dreamy, guitar-led beat fades into ambient autotuned wails and back again, augmenting the delirium of DePaul’s techno-dystopian descriptions. Many tracks follow suit, barreling through tempo changes and beat switches as DePaul jumps from palpable descriptions of sex to sci-fi word play to spiritual surrealism to diaristic reflection.

Providing contrasting recollections of sexual exploration, “Courtship (Discotheque I)” and “Jazz House Exit (Discotheque II)” showcase the symbiotic relationship between these pan-directional narratives and their musical settings. The former track sits in the heat of the club, the peak of seduction and ecstasy, as the music hovers along a stilted, dissonant groove and DePaul’s lyrics frantically rush past the beat as they relate the thrill of the encounter in real-time. The latter track incorporates layers of sentimental harmonies and the sultry hunk of an R&B groove underneath DePaul at their most plaintive. Here, the surreal pleasures of “Courtship” give way to reflection and the craving for emotional connection: “Could you see yourself as mine in the future? / The subject I long for, the only being needed / I see the most in you, I see the cosmos in you / Since I got close to you.”

Alongside these sexual awakenings, Divine Ecdysis builds a competing, far-reaching nexus between the forces of heteronormativity (“Tammuz (feat. Leah Hart),” “Postnorm” with fellow Grimalkin artist Don’t Do It, Neil), cycles of violent oppression (“Johnson’s Plight”) and patriarchal dominance (“Divine Fury”). At the center of this web sits DePaul, navigating, resisting, creating and transforming. As the album title suggests, Divine Ecdysis traces the artist’s metamorphosis, the process of finding their place within and against these dominant forces. The thumping “Operation Cocoon Kill” outlines the allegory’s mission and scope, with DePaul asserting “Imma break the cocoon” before expanding a personal goal into a mass exodus: “Group coping first, revolution second / Then it’s exit / Back to connection,” they sing, their multitracked, pitch-shifted voice tumbling over itself as the synths wail like warning sirens behind them.

The search for new peace comes to a head in “Century of the $exXx $ymbol,” the most tender and resolute offering here. It runs more than twice the length than nearly every other track on the album, and the frenetic structures and hurried deliveries that mark previous cuts fall away into the sustained, delicate pulse of synthetic woodwinds and strings. DePaul floats atop this stilted hymn, singing praises to the beautiful contradictions of queer love: “All on my lips, she’s there / All on my lips, he’s there / Calmly I lick, prepare / Watch as I drip, he’s there / We there / Breathe where, breathe where” Against the petrifying hegemony that DePaul faces earlier, here the artist finds comfort in affirmation; they find sanctuary allowing their own paradoxes to breathe.

That two more tracks follow the resolve of “Century” reasserts the perpetual necessity of change and growth. Even the final track, “Ishtar, Reprise (feat. CODEi),” avoids neat closure. While DePaul exalts that they’re “finally free” and that “time’s beneath me,” they also seem to acknowledge the limited nature of this checkpoint, the temporary and subjective balm of the pleasures and triumphs they’ve received along the journey: “I’m not just trying to stimulate the frenulum / I’m tryna reach a higher frame and level up / Straight to a nebula where we become settled dust / I standby until ash is what’s left of us.” For the newly minted Ishtar Sr. (as for us all), transformation does not beget arrival, only more transformation. –Audrey Lockie