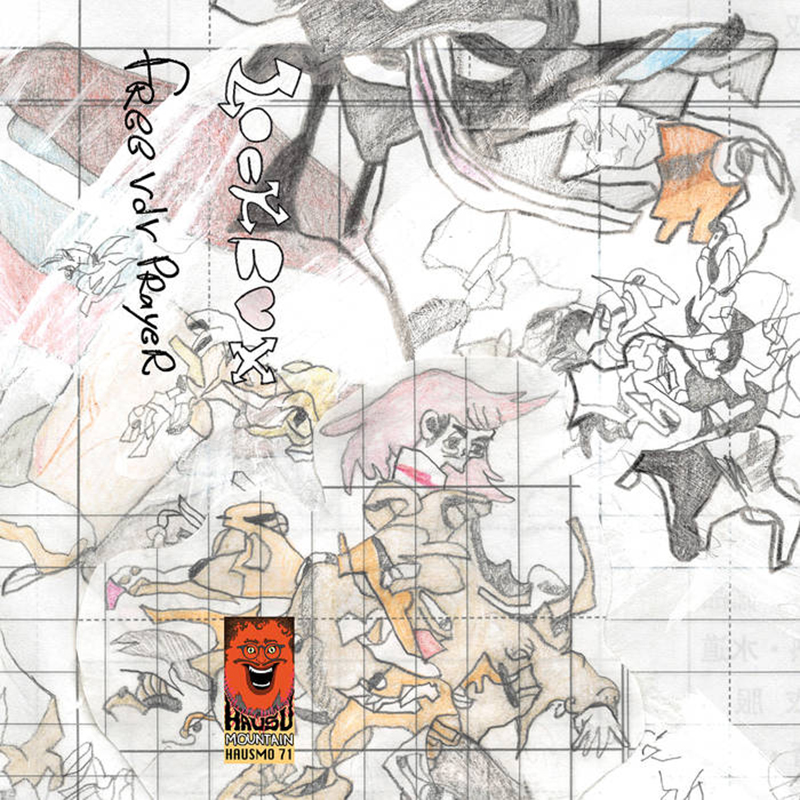 On first listen, the new album from the Chicago-based artist Lockbox (Jesse Briata) sounds like a safe, mild entry into the growing catalog of Aphex Twin rip-offs. Deeper than the surface, however, Free VDV Prayer reveals innumerable layers of intricacy and strangeness, resulting in an album that manages to ride the line between pure confusion and body-moving dance music. Often, the unconventional track structures and stylistic inconsistency lead the listener into unpredictable territory, but these experimental tendencies always come buried within catchy melodies, thumping drum loops and a pleasantly airy atmosphere.

Immediately, the opener, “Peace On,” reveals Briata’s restless spirit and knack for mediating conflicting musical elements. While the call-and-response melody and driving rhythms are digestible enough, the track never fully recovers from the breakdown at its midpoint. The remaining minute and a half is a struggle between the opening motives and increasingly alienating samples, drum breaks and ambient interruptions. While the album as a whole works between convention and experimentation, this is one of many sections where the two actively battle each other for the spotlight.

This struggle defines Free VDV Prayer: a pleasant and reserved IDM record from an artist who can’t help but be unpleasant and wild. “yea” might have been a somewhat normative drum-and-bass cut, but the ugly, squelching bass line and frequent rhythmic ambiguity keep things jarring and disorienting. “Blood0ntheC0ncrete” starts out as a glitching take on techno before slowly transitioning into one of the most driving riffs on the album. Of course, as soon as the beat finally kicks in, Briata gives the listener about seven seconds of ecstatic resolution before jettisoning off to the next track.

While most of the album consists of similar experiments in conventional dance styles, there are some moments of complete oddity. “TAVISMSILEY” is 45 seconds of a disturbing, warped take on video game music, “Airbender Blues” features a mockingly cheery guitar riff under some stock sound effects and whining vocals, and “NuNamaste” is an eerie ambient track with recurring samples of Bart Simpson laughing. Not coincidentally, these more wayward tracks arrive in the last chunk of the album. Briata eases the listener into Free VDV Prayer with more graspable compositions like “Peace On” and “Hoodie” (the latter is a colorful trap production) before sending them into chaos.

In keeping with his disregard for expectations, the only track that doesn’t constantly switch styles or completely reimagine its source material is the nearly 12-minute centerpiece, “headcasegarbage.” Built off of one repeating drum loop and a few keyboard ideas, the track is relatively easy-going and tranquil. Save a full-on glitch-fest in the middle, the slow development and incessant repetition on “headcasegarbage” make it one of the most refined compositions on the record, and it wouldn’t have sounded out of place on an Artificial Intelligence compilation. Similarly, the closer, “shooting_star,” is a peaceful, muted track that brings the album to a satisfying resolution. It’s as if, after over an hour of maniacally exploring the limits of his style, Briata feels ready to settle down and relax.

Given how far-reaching and inconsistent the album might seem on the surface, Free VDV Prayer is surprisingly unified and cohesive. Much of this is timbral, as Briata seems to use a relatively limited set of soft/hardware. The tight drum sounds and slinking, colorful melodic patches pop up on nearly every track, giving the otherwise erratic music a recurring flavor. For an album that sometimes feels purposefully bloated and alienating, Free VDV Prayer is constantly exciting and endlessly listenable. –Audrey Lockie