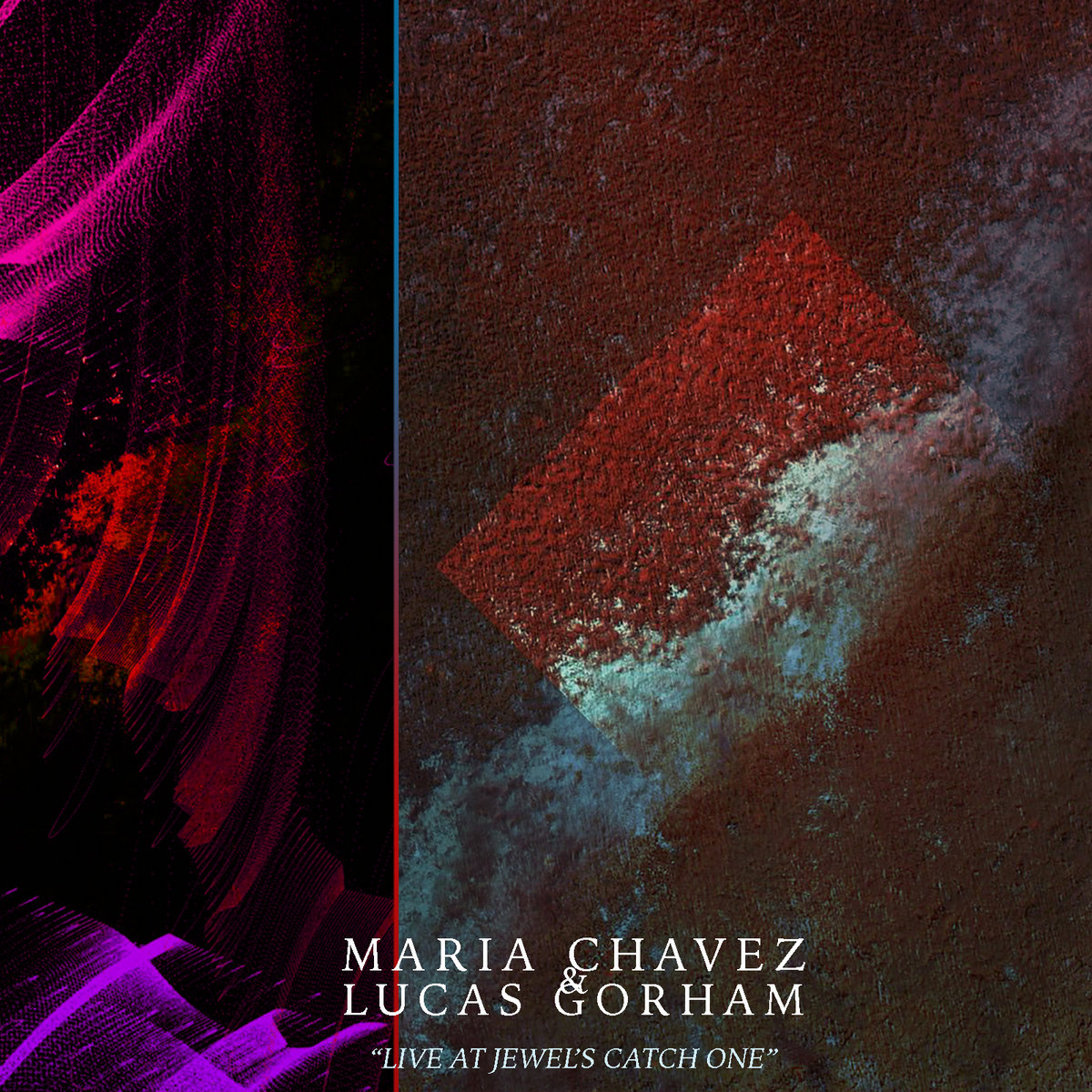 “The ear does not listen – the brain listens.” –Pauline Oliveros

As much as we listen to sound, so too do we listen to action, body language, touch, thought and feeling. “Live at Jewel’s Catch One”, the new collaborative release from turntablist icon Maria Chavez and experimental guitarist Lucas Gorham, thrives off of a commitment to careful and selfless listening. Recorded live during a show at which, due to a lack of stage monitors, neither Chavez nor Gorham could hear their performances, the resulting album showcases not only the duo’s imaginative and inventive sound crafting, but their shared, empathic approach to collaborative performance.

The moments where the duo fall into symbiosis speak most toward this pursuit of sonic egalitarianism in the absence of simple hearing. The end of side A finds Chavez pitting two choirs against each other in hard stereo pan, the spliced and stuttering lower voices in the left channel ricocheting off the cyclic melismas of the higher registers in the right. Between these dueling voices lies Gorham’s guitar, an explosive, sidewinding melody driven by the wail of his distorted orations. Using non-vocal means, each musician finds novel ways to sing out these melodies that bear the emotional weight of humanity.

The midsection peak of side B stands as another high point of synchronicity. Gorham’s guitar leans heavy into shimmering, metallic harmonies, while Chavez takes her cosmic noise eruptions and mashes them into something that grooves with intensity. So much of “Live at Jewel’s Catch One” works in sparsity, with the two musicians almost sneaking around each other’s utterances. Here, the collective exultation offers the most stunning moment on the album; after troves of respectful trepidation, Chavez and Gorham find common ground in this cathartic outburst.

As these two musicians listen to each other, so too do they listen to their own tools as co-conspirators in their music-making. Chavez’s turntable manipulations—inherently founded on a volatile, physical relationship to her instrument—feel especially on point as she maneuvers through lulling loops and jump cuts, masterfully chopping up samples into alien sound worlds. Gorham feels deeply in-tune with his guitar, as well, never mistaking it for another being or electronically mangling it past the point of recognition. While he often douses his instrument in distortion and other identity-bending affectations, the guitar retains the messiness of its physical origins. Around three minutes in to side A, Chavez’s glitching clutter begins to recede into steady thuds and pops. Gorham’s guitar rampages across this open space, the twang of his steel guitar trembling and popping with the vibrancy found only in the reverberant slap of string on fretboard.

Plenty of moments on “Live at Jewel’s Catch One” escape the  awe-inspiring synchronicity of its peaks, but never does the music feel stagnant, scattered or searching.  And as Gorham’s destination-averse crescendos piledrive over the unsettling humor of Chavez’s speech splices (“economy!”) at the album’s close, the absurd contrast confirms that, whether they’re bound to the same goal with a padlock or wandering off into their own galaxy, the pair always find subliminal ways to create new nuances. Here, even without the privilege of hearing, Maria Chavez and Luca Gorham afford themselves, their sounds and each other space to speak and listen. –Audrey Lockie