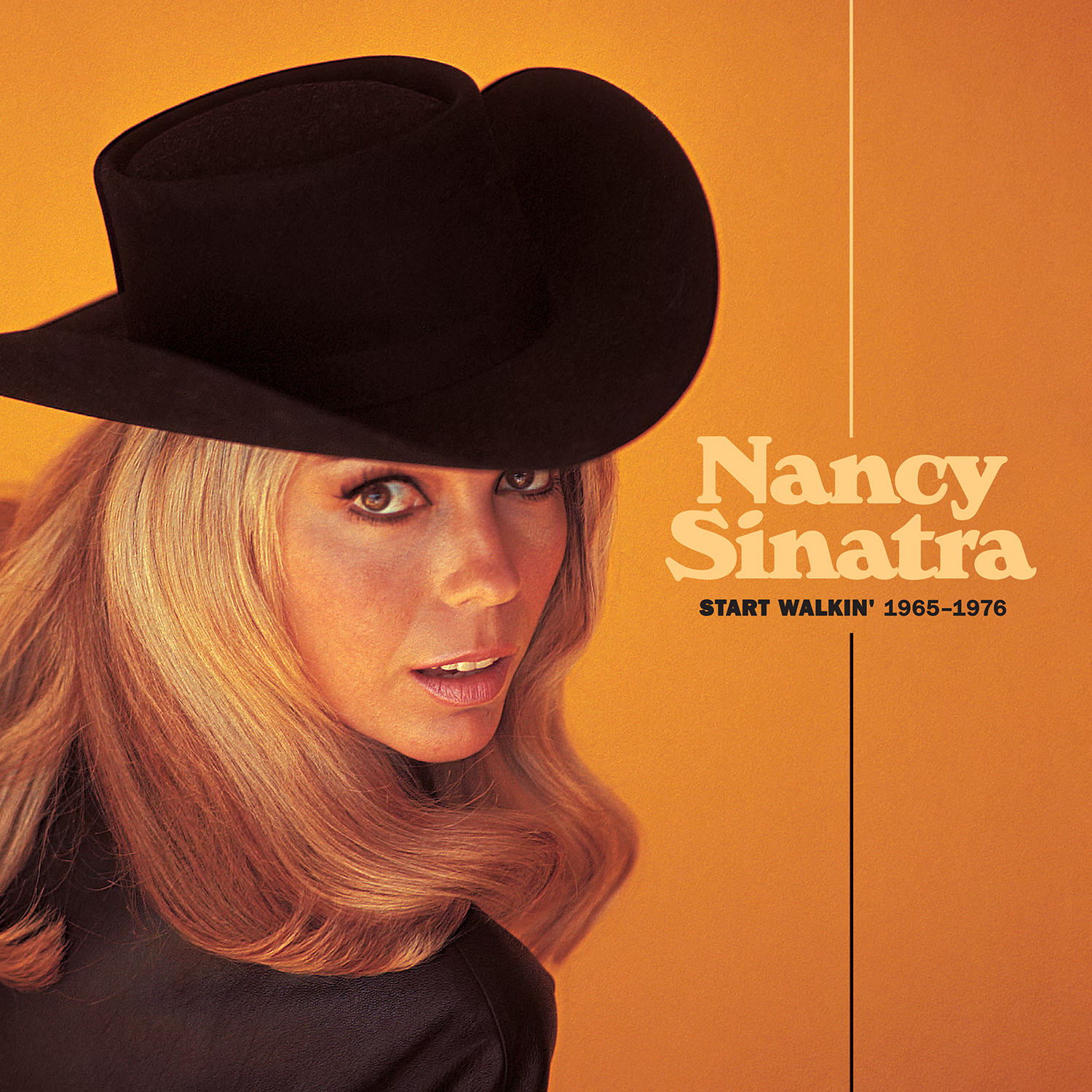 Nancy Sinatra is an icon. The new compilation, Start Walkin 1965 – 1976, proves just that. Nancy Sinatra earned her icon status, not because she was the daughter of the Chairmen of the Board (Frank Sinatra), or that she was a poster girl for the 1960s mod girl explosion, Nancy earned her place by finding her own vision for pop music and wrapping it all up in a cloak of nonchalant cool. You can thread Nancy’s influence all the way back to Bobbie Gentry’s southern myth-making Ode To Billie Joe straight to the underlying, casual nihilism of Lana Del Rey.

Start Walkin’ 1965 – 1976 contains the familiar: a culture-changing women empowerment anthem (“These Boots Are Made For Walking”), a James Bond theme song (“You Only Live Twice”), a Quentin Tarantino-plucked-Cher cover song for the Kill Bill Vol. 1 soundtrack (“Bang Bang”) and a little ditty about an original gangster (“Machine Gun Kelly”). This is enough to fill any resume, but it only tells half the story of Nancy. Early on when her pop career was at a flicker, Frank hired a hippy-smooth folk singer that had a flair for old time country and western storytelling named Lee Hazlewood. Hazlewood would help Nancy reinvent herself for the masses. Hazlewood had an ear for so many different genres of music that he decided to bring all of them in.  The Nancy Sinatra sound contained multitudes.

The Hazlewood/Sinatra formula could still do pop—the track “Sugar Town” was radio-friendly candy mixed in with a splash of pot-smoke psychedelia. “I got some troubles / But they won’t last / I’m going to lay right down here in the grass / And pretty soon all my troubles will pass,” Nancy sings with a breathy confidence, “cause I’m in Shoo-shoo-shoo / Shoo-shoo-shoo / Shoo-shoo-shoo / Shoo-shoo Sugar Town.” The track is pure bliss. On most of these songs, Hazlewood used that Ennio Morricone, spaghetti-western way of creating a bleak minimalism and filling in the spaces with hand-claps, finger snaps, train whistle–type noises and breezy acoustics; setting things up to throw in simple drum rhythms and killer bass lines and let Nancy do her thing.

Start Walkin’ captures most of the Hazlewood/Sinatra country & western kiss-off’s, such as highlights “So Long Babe” and “How Does That Grab You, Darlin’.” These tracks are held together with a tough, bubble-gum sass that Nancy pulls off so well. “I’ve told you that I’m lightning’s girl,” she confidently sings on the title track, “But you keep hanging ‘round / If lightning ever catches you / He’s got to put you down / About six feet.”  The highlights of her time with Hazlewood, though, are the duets. There are many of them on Start Walkin’. All pure gold. The hits are included: “Summer Wine” and “Sweet Velvet Morning” match Hazlewood’s rich baritone with Nancy’s pure pop musings. The obvious banger of the Hazlewood/Sinatra duets is, of course, “Jackson,” the duet that Johnny and June Carter Cash crushed. Hazlewood and Sinatra do just the same with it.

Nancy was introduced to the world on The Frank Sinatra Timex Show: Welcome Home Elvis. She shared the stage with two legends and did a duet with her dad, and it was awful. Nancy was a mess on live television, shaking in her soon-to-be-famous boots. Pop music wasn’t in the cards for Nancy. Thankfully, she found another way. She dyed her raven hair blond and the rest is history. Start Walkin’ 1965 – 1976 is the perfect compilation to highlight her great career. Being the daughter of Frank must have been easy and impossible at the same time. Nancy succeeded in her own way. –Russ Holsten