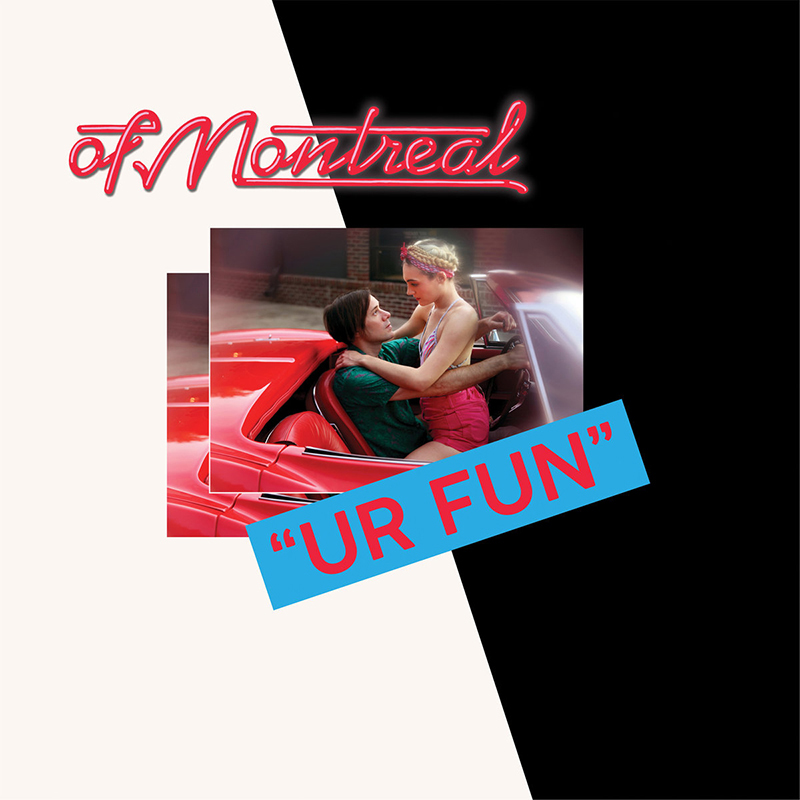 of Montreal | UR FUN | Polyvinyl

Review: of Montreal – UR FUN

of Montreal
UR FUN

Does of Montreal really need an introduction? With the latest, UR FUN, being their 16th studio album, I’m going to say there’s no need for a boring introduction because “boring” is the exact opposite of what this band can do. Kevin Barnes, the one who started it all and recorded the album entirely by himself in his hometown of Athens, Georgia, is still strong as ever with his all-around absurdness and enthusiasm.

Alright, I will admit—when I first listened to the album, I was deathly hungover at a car dealership and couldn’t for the life of me get a grip of Barnes’ irony with the record lazily titled, UR FUN. The music was, in fact, comparable to my goddamn hangover. Not fun, Barnes. Not. Fun. The whole thing seemed choppy and out of place due to the lack of transitions between each song—then, I listened again. And again. And again. All jokes aside, there’s a lot to unpack on this electro-pop album, which takes multiple listens to grasp the genius behind of Montreal, and to come to the realization that Barnes is completely and utterly messing with us listeners. Quite frankly, of Montreal is probably a band that’s too smart for me to review. So, here we go.

UR FUN begins with a gung-ho track, “Peace To All Freaks.” Immediately, the album moves along to our current cultural habits with “Polyaneurysm,” offering comic references mixed with Barnes’ personal thoughts, and specifically, his love life and the fall of monogamy: “I-D-K I cannot say can I be chill with this? / Something about open couples doesn’t feel real serious / I guess all the same I’m poly-curious / Playing musical lovers is starting to feel kind of kitsch / If you want monogamy / Are you just like some basic bitch? / I guess it’s just whatever current sitch.” One could suggest that these words are pure silliness and a “screw you” to the people who maintain traditional relationships. Regardless, I respect the band for consistently coasting along with the day and age—never having an issue to evolve with what the general shift in society progresses into at any given point.

As the album continues, the tracks become consistently about Barnes’ newfound love (who’s featured in “Gypsy That Remains”). “You’ve Had Me Everywhere” is a definite cheesy-ass song that proves the duo’s earnest feelings. Moreover, a slower track, “Carmillas of Love,” which shares a similar electronic-rock tune to Ratatat, is about the two hilariously (but also seriously) wanting to take ecstasy as their idea of couple’s therapy. Honestly, that sounds terrifying—but maybe if I actually took the molly my ex gave me some odd years ago, we’d be married. Who the hell knows. Oh, and of course, Barnes gets political with a killer jam, “Don’t Let Me Die In America,” desperately singing, “I don’t even wanna haunt this place! / Have I lost my country because I have no love for piggy piggy fascists?” With ya there, buddy! The song speaks for itself and has me thinking about “Bassem Sabry” from Aureate Gloom where Barnes believes, “Every leader is a cellophane punk.” Yup.

Then, it gets interesting. In “Deliberate Self-harm Ha Ha,” Barnes hazily suggests that it’s a fad to pretend like something is wrong with you (mentally and physically). The track is highly intriguing and my personal favorite based on the tasteful, lethargic melody—comparable to what you would get from 2013’s Lousy with Sylvianbriar. Barnes chimes, “How does it feel to own such a trendy excuse? / Treatment did nothing for me / Nothing I recall / I feel just like a sociopath if I was feeling anything at all.” Oh, snap. What is Barnes implying? Especially in conjunction with the final song, “20th Century Schizofriendic Revengoid-man,” being about the ways in which everything and everyone is a sham and a trickster. This quick-paced, surf rock tune will get stuck in your head as Barnes questions, “Why does everything seem fake? / Why does it all seem unreal? / If everything is fake / I wanna be fake / It’s so lonely being the only one who thinks they’re real.”

Barnes’ fascination with not knowing what is what resembles a quote from writer Camille Bordas: “As if deception and complications were only tricks that fiction had invented to compensate for the lack of duplicity in actual people.” In other words, this is all too real and we created the fabrication that accompanies reality as well. Consequently, what does it mean to be real? It’s a big difference from authenticity, and that’s exactly what’s terrifying about not only our country but the citizens here too. Although, I’m not sure if Barnes is accepting this or is in denial. We all know writers are liars, so maybe Barnes is the trickster after all.

I love this band so much. Every time they come out with an album, I’m always hoping it’s something complicated like what you hear in Skeletal Lamping or Paralytic Stalks. Unfortunately, I don’t think this notorious, disruptive person of the band’s creativity will happen anytime soon. Album after album, their music is beginning to stem into ordinary indie pop, though they still have lyrics that are brilliant and clever, which is the reason this review is mainly about the words rather than the sound. Ultimately, that’s why I disliked UR FUN when first hearing it. I keep an idealization of Montreal, always hoping they’ll come out with a record as fucking unique as they had done years ago. Alas, Barnes is being Barnes. There’s no show, or anything to make known. He does whatever he wants. It’s his world and we’re just wanting to have a listen. –Kassidy Waddell

From Dylan to Modernity: An Interview with of Montreal’s Kevin Barnes
Review: of Montreal – Lousy with Sylvianbriar