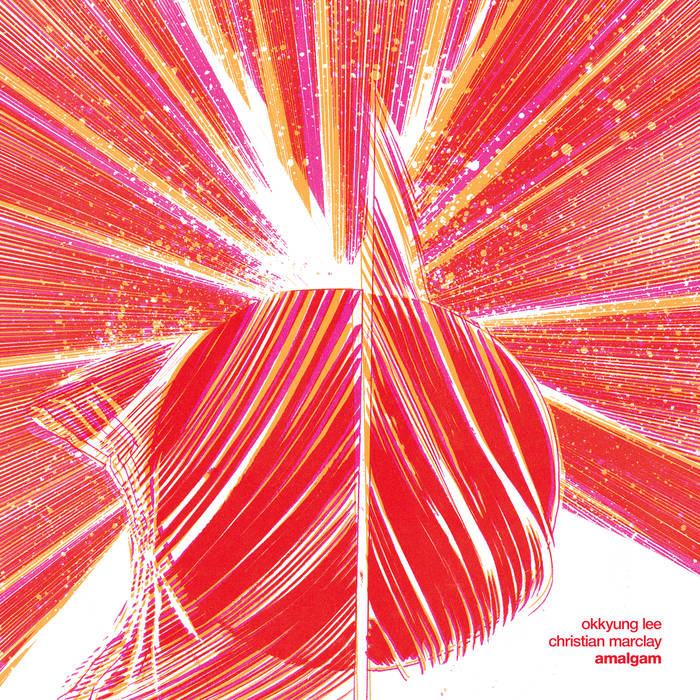 Amalgam, a 2014 live recording from cellist Okkyung Lee and turntablist Christian Marclay, might come across as a slightly alienating release at first. The record is one 36-minute track, the choice of instrumentation is not only minimal but downright strange, and the entire piece is freely improvised. While there are definitely some hurdles to jump over when listening to Amalgam, it certainly rewards heavy focus. Rather than simply accompany each other, much of this record could be described as a duet in the truest sense: Often there is no star, and the musicians both sacrifice a little of their own sound in order to craft a piece that falls somewhere in between Marclay’s electronic noise and Lee’s contemporary classical leanings.

That being said, between the five and 10-minute marks, Marclay all but disappears, and Lee takes over. Her cello lines begin with barely audible harmonics and slowly build momentum until the end of the section, which she fills with blistering runs up and down her instrument’s neck. The most active Marclay gets throughout this section is some clanking and clicking, and his presence is definitely missed. While this section does showcases Lee’s awe-inspiring technicality and knack for solo improvisation, it doesn’t feel as do complete as the sections where both musicians are equally featured.

This solo run does, however, move into what might be the most accomplished section of the piece. Right around 10 minutes and 30 seconds in, Marclay lays down a chord progression from what sounds like a lost demo of a John Carpenter soundtrack, and this gives Lee an eerie harmonic foundation to work with. For a while, she rides these chords with ease and allows the dissonances between her playing and Marclay’s samples to become almost grating, but soon she delves into long, steady sweeps. This gives Marclay space to take a more active role in the performance, and the duo carries on this type of careful interplay for the next several minutes. Marclay will often sample recordings of string pieces in order to match the timbre of Lee’s instrument, but she’s equally willing to turn her cello playing into scratchy and turbulent noises.

The rest of the record is full of minute but effective surprises. Right around three minutes in, Lee’s cello scrapes alternate with gigantic blasts of noise from Marclay’s end, a hugely powerful idea on an otherwise subtle record. The most impressive moment comes when Marclay interrupts a drone-oriented section with a hunk of static that disrupts everything and causes the musicians to begin anew, which they do without skipping a beat. Lee adds a completely new texture and Marclay quickly follows suit, proving just how adaptive both of these musicians are, even when the musical ground falls out from underneath them.

As atonal and strange the bulk of this improvisation might be, it ends rather pleasingly. As the piece is winding down, Marclay plays a string sample that sounds almost sentimental, a big change from the clustering dissonance of the last 30 minutes. As the plaintive theme plays on, Lee’s cello slowly moves from her manic noodling to calm, soothing stretches of sound. Even if this somewhat harmonious ending sounds out of place on Amalgam, it reaffirms that every sound that occurred on the record was meticulously chosen in the moment. Okkyung Lee and Christian Marclay love uncomfortable and abstract sounds, but they’re not afraid to let their emotions show when it’s necessary. –Connor Lockie