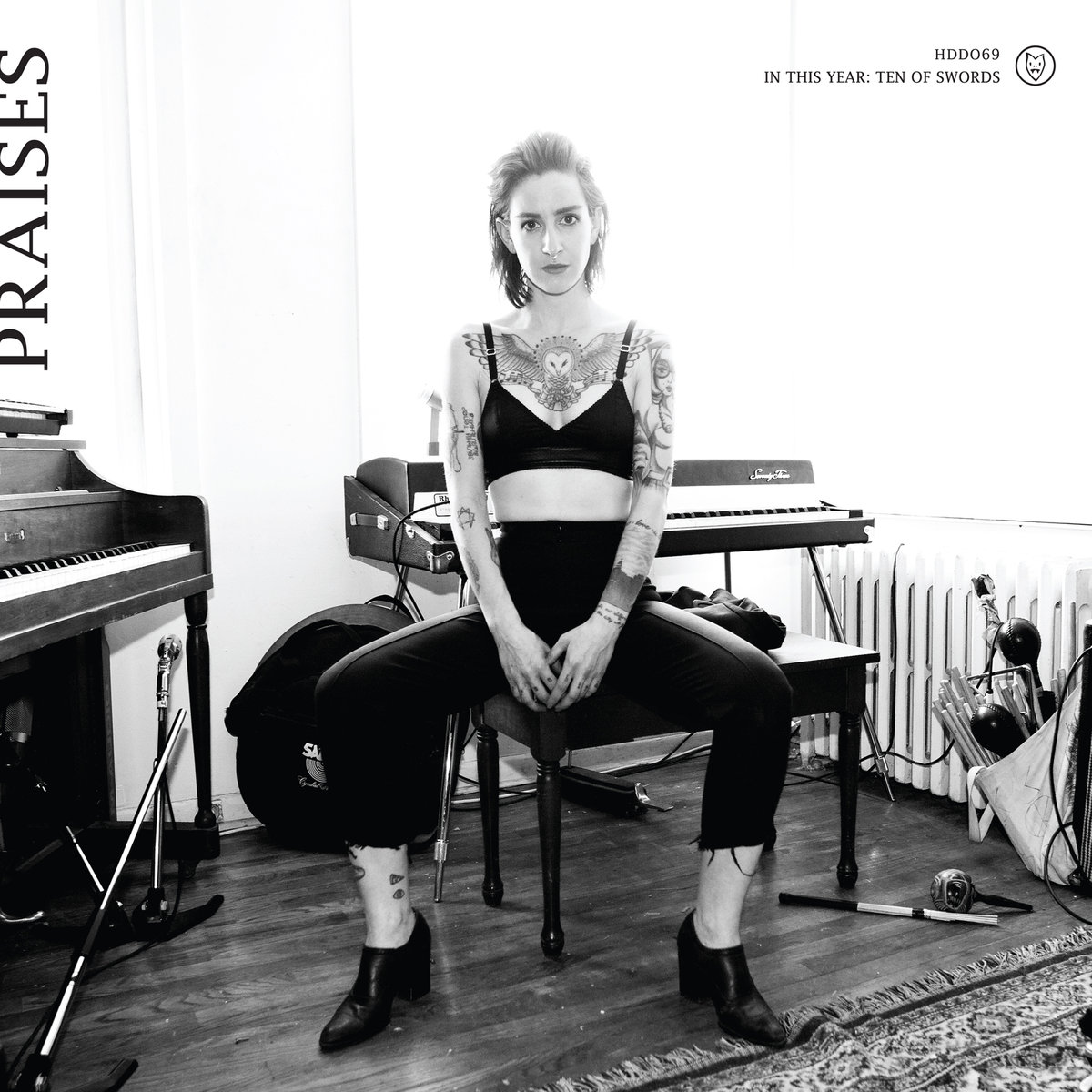 Praises | In This Year: Ten of Swords | Hand Drawn Dracula

Review: Praises – In This Year: Ten of Swords

Praises
In This Year: Ten of Swords

After gaining traction as half of the duo Beliefs with Josh Korody, Jesse Crowe embarks on a solo project under the name Praises. In This Year: Ten of Swords is her first full length under this moniker, and shows clearly that Crowe is searching for a dark, minimal sound. There’s a definite moodiness and subtlety to the album, one brought about and furthered by a consistent musical palette and an overarching focus on Crowe’s steady, resonant voice.

As a whole, the album offers a set of nine almost-pop songs that are riddled with hidden intricacies. There are tuneful hooks here, as well as chord progressions that have the makings of an emotive ballad. However, Crowe seems almost wary of letting these compositions lean too far toward accessibility, as more often than not, the tracks—both musically and lyrically—oscillate around a few key motifs and patterns without concern for swift changes or traditional development. The opener and lead single, “Love Unkind,” is a perfect example of this style. Beginning with a moody piano and synth duet, it slowly builds momentum before the electronic percussion enters and the song reaches an understated climax with a triumphant vocal refrain.

Given this somewhat muted approach, some of the finest moments on In This Year come when Crowe’s music takes a knotty, electronic approach, and when, the core beats are themselves interesting enough to hold a track together. “Anyone’s Anyone” has a deep swing to it, and the distorted bass tone is one of the most memorable sounds here. “Welcome Home” has a warm, grainy texture, with the paper-thin drums playing foil to the washy synths. Crowe’s repeated refrain, alternating between “It’s not your fault” and “Your laughter is contagious,” finds power in its ambiguity. She delivers these reassurances in her typically deadpan delivery, giving the feeling of being almost sincere without ever showing too much of her hand.

The lyrical delivery and themes hover around this mystifying non-place, with slight variations in tone lending the album emotional diversity. Where Crowe’s dry, flat voice reads as endearing on “Welcome Home,” the preceding track, “Prey,” offers a more sinister tone. The jabbing synths and echo already present a darker mood, and the vocals only capitalize on this. “Starving tonight,” Crowe repeats, hiccuping on the “-ing” as if she’s struggling for air in the recording booth before she dips into her low register for one of the album’s snarliest moments.

“Run” is one of the album’s few missteps, as it forgoes the electronics for an alt-rock-leaning composition for guitar and voice. The melody is fine, and Crowe’s airy guitar tone matches the rest of In This Year in texture, but overall, it feels like the track is more of an unfinished demo than a full-fledged track among the rest. So, too, final track “Closer” feels fleeting in its focus on gliding, aimless piano lines. Especially as a finale, it doesn’t live up to the metallic-laced art-pop that so much of the album excelled in.

Crowe has found a lane, and on In This Year, she races down its unifying center. What the album might lack in range, it more than makes up for in atmosphere; where it forgoes bombast, it revels in eeriness. Picking apart some of the muddy lyrical passages might prove a welcome task for listeners willing to dive deep into Crowe’s world otherwise, the album functions well as a forced entry into darkness and an unnamable despair. –Connor Lockie