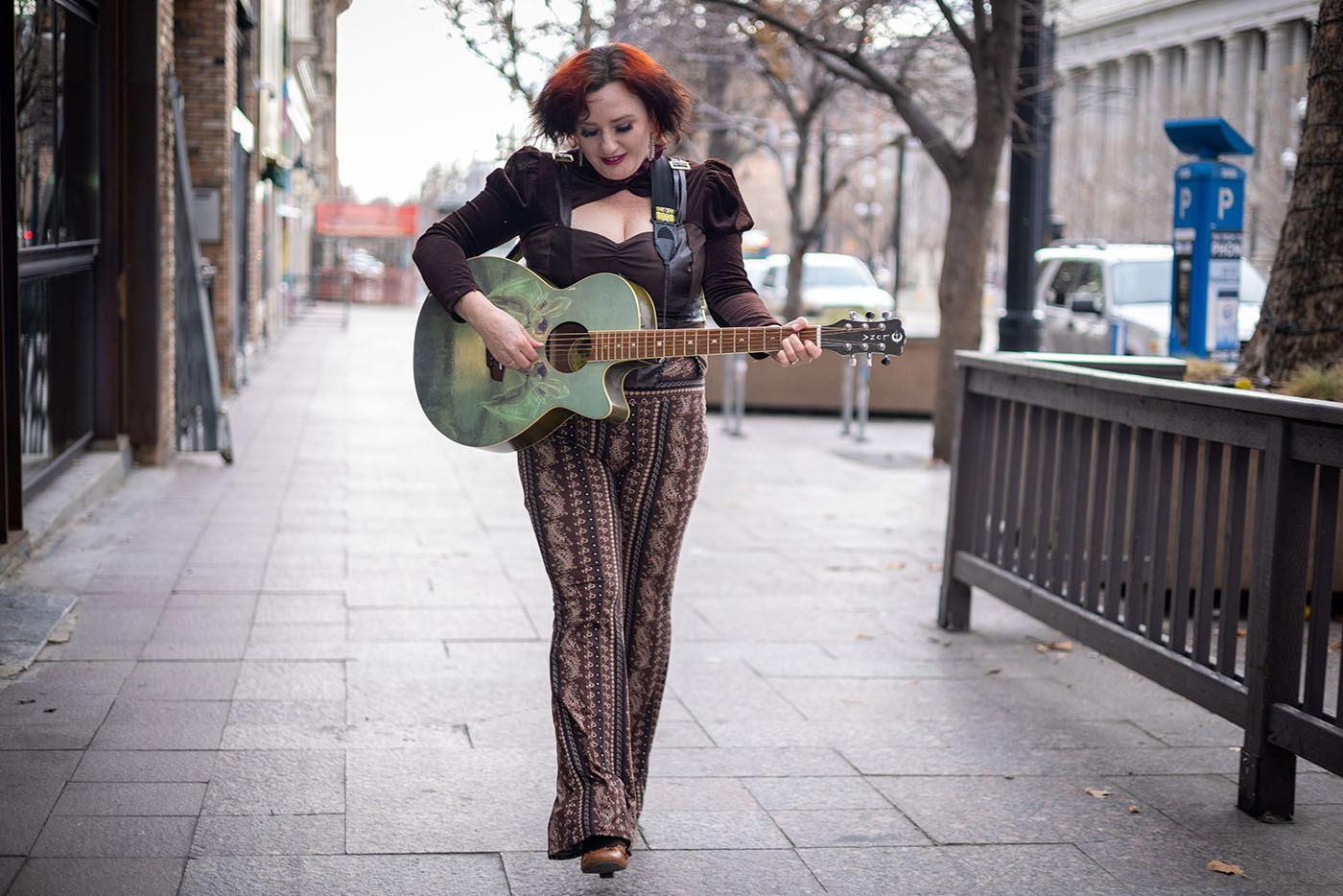 Valerie Rose Sterrett was bitten by the “performing bug” at a young age. By the age of five, she played the lead role and was the youngest performer in her school’s production of Annie. But music and performance had already been in Sterrett’s bloodline for generations. Sterrett pulls inspiration from her family’s extensive performative roots while encompassing her own singer-songwriter flair, showing that she is a born-creative and an ever-evolving musician. Today, she exercises this history through her alternative-psychedelic music.

A source of inspiration for Sterrett was her great aunt Isabel, a ragtime performer for local bars in the ‘30s, until she was hit on the head with a beer bottle after. “A jealous fight broke out with her husband and another man,” Sterrett says. This family history incident inspired an unheard song of Sterrett’s that she plans on releasing with a music video set in a vintage bar scene. The song is called “Miss Arizona,” referencing a time when this same great aunt competed under this title in a Miss USA Pageant.

Another remarkable relative of Sterrett’s is her grandfather on her mother’s side, “who was a paratrooper in World War II [but] used to perform in the soldier shows and sounded like Bing Crosby,” Sterrett says. “Interestingly enough, I did the same type of stint.” Once out of high school, Sterrett joined the army in the pursuit of performing gigs all around the world. Eventually, she was invited to audition for the USA Express Touring Band Show, landing her a spot as the keyboardist and singer in the group. Traveling all over the Middle East, “our mission was to perform overseas for thousands of soldiers songs from the top 40 hit charts to raise their morale,” Sterrett says.

“I have morphed into my own artist from all influences, and I am just running with it.”

Since then, Sterrett has been able to expand her own repertoire as an independent singer-songwriter, musician and performer. With influences ranging from “Billie Holiday to Joni Mitchell to Heart” and many others, she says. Sterrett likes to pull inspiration from all kinds of genres and artists as she and her music evolve. “I feel I am just a modern-day version [of all] of them. I have morphed into my own artist from all influences, and I am just running with it.” However, Sterrett says that there has been one consistent source of inspiration for her: The Beatles.

“I did not know how much that would have an impact on me until I found myself emulating Paul McCartney in my own tunes,” Sterrett says as she reminisces on a few moments throughout her life when this iconic musician’s discography made a lasting impression. One moment in particular was when film director Kody Newton approached Sterrett with the opportunity to write a song with the same sonic reference of “Just Another Day” by McCartney.

The end result was her ‘60s rock revival single, “This is My Day,” with a backup band including drummer Tony Lemon of Lunar Dream Music and Entertainment and guitarist and bassist Chris Henderson . This song was also accompanied by a fashionable music video made locally at Britelite Productions and Vega Media Studios. In it, Sterrett sports a red-headed beehive-do and go-go boots to enhance the psychedelic rock-inspired aesthetic, giving this tune a strong indicator of groovy visuals for the catchy, clap-along choruses. Consequently, this song ended up winning “Best Original Song” for the independent film Affective at the 2020 International Film Festival in Venice, Italy.

“If I am not touching or inspiring someone in some way, then I am not doing what I am meant to do with my music.”

Sterrett isn’t afraid to expand from this folk rock/psychedelic-influenced sound into any genre that feels right. Her most recent release, the alt-rock rendition of Thomas Helmore’s Christmas classic, “O Come, O Come, Emmanuel,” was originally a final project for a class at Weber State University, where Sterrett is currently studying music. She recorded it with Ogden-based heavy metal band Out of Anger, giving this hymn a hard-hitting energy like never before. Sterrett plans to collaborate with Out of Anger again by releasing a whole holiday-themed EP with them at the beginning of the upcoming holiday season.

Even though Sterrett is stepping into more of a recording artist position nowadays, most of her favorite moments have been jamming out with friends in random places and creating little “song babies,” as Sterrett would put it. But Sterrett is still steering more toward digital artistry and is in the process of sorting through hundreds of songs she has written over the years in hopes to create and release some stellar singles that may potentially become a debut album. “It has just become time to hone-in and record them,” Sterrett says. She’s already in the process of releasing three new singles, “Blinding Tornado,” “Think of You” and “Ice Queen”. Sterrett says they will be available winter of 2021, “on your favorite listening platform,” she says.

Even in our seemingly never-ending pandemic world, Sterrett still aspires to a future where becoming a touring musician again is possible. Sterrett wants her music to be able to connect to all walks of life—whether it’s performing at a Hollywood bar for a man drinking alone or playing at Utah ski resort for a tourist mother. “If I am not touching or inspiring someone in some way, then I am not doing what I am meant to do with my music,” Sterrett says.

Make sure not to miss Sterrett perform alongside The Fervors and Skumbudz at this month’s SLUG Virtualized Showcase. Catch it live on March 19 at 8 p.m. on SLUG’s YouTube channel.