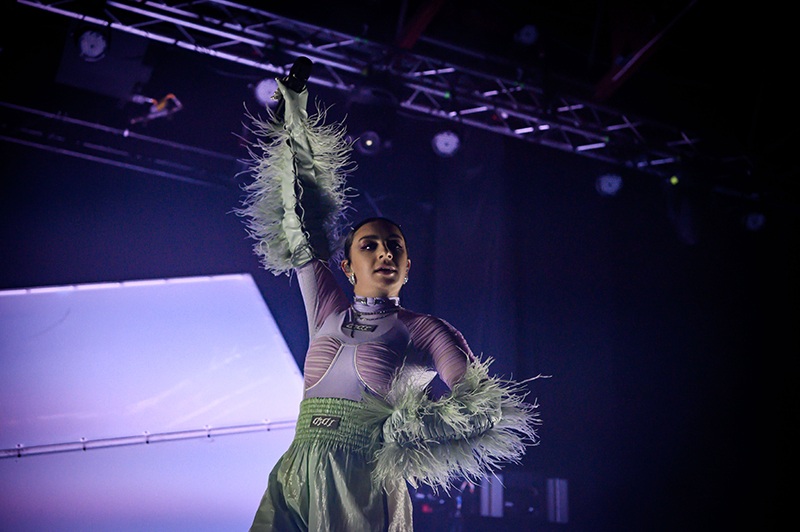 It was a mellow, chilly Monday night as the fall season began to take a hold over Salt Lake City and Charli XCX graced the stage at The Complex. As I entered the venue, people were just about overflowing out of the small side of the venue where the concert was being held. Fans were already watching the opening act, Dorian Electra, work the stage. Electra had a very energetic set with lots of dancing and great stage production. I wandered upstairs to the 21+ bar to get a different vantage point and it was nearly empty save a few concertgoers enjoying some tasty adult beverages. After Dorian Electra’s last song, they mentioned a meet-and-greet at the merch booth with the band. The crowd roared with excitement.

As the time got closer to Charli’s performance, the bar began to fill and the energy in the building started to build. At about 9:05, the stage lit with bright white lights, projecting Charli’s silhouette towards the crowd. Charli XCX lovers went crazy as she opened with “Next Level Charli,” the first track off of her new self-titled album. The production here was truly her next level. Between her energy and passion throughout the night, I really enjoyed watching her celebrate her new release. Charli left the stage for a short encore break before returning to throw down four more songs to close the night: “Unlock It,” “I Love It,” “Boys” and “1999.” Salt Lake was just one of the many stops on the Charli XCX tour, and the lovely Charli was an exciting show to listen to and photograph. I’d recommend catching her at one of the shows she’ll be performing across the country in the next few months.

Review: Charli XCX – True Romance
Charli XCX @ In The Venue 05.13 with Marina and the Diamonds