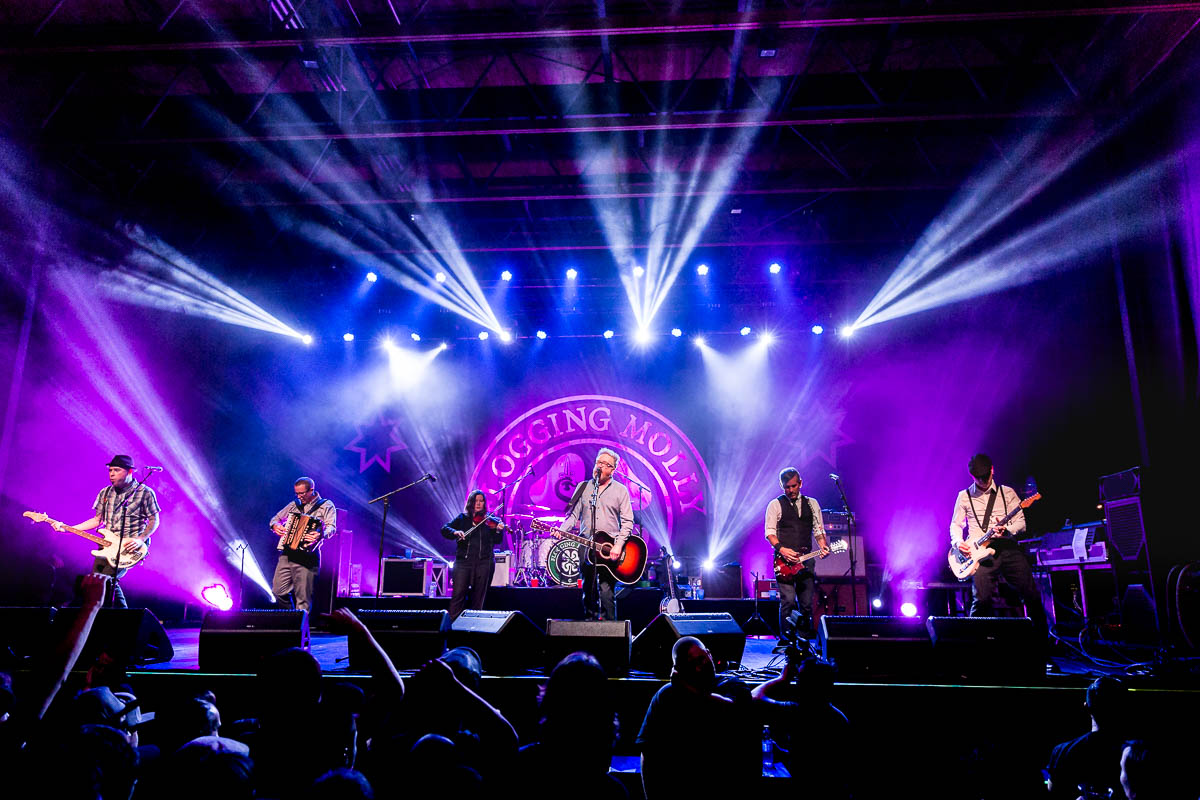 As I sway back and forth with my arms around the people I’ve had the pleasure of calling my dearest friends for years, a sense of warmth and pleasure washes over me as we stare in awe at the one and only Dave King while collectively shouting/singing, “Hey, I may never leave this world! But if I ever leave this world alive!” Flogging Molly are one of those bands that can bring together people who have never met and turn them into best friends, regardless of how much alcohol is running through their system. That was certainly the case for myself when I saw them on the Float Tour when I was only 15 and was new to the whole punk rock show experience. It was cheerful, it was fun, it was rowdy, and it turned me into a longtime fan. Since then, I’ve not missed a single show when they come roaring through SLC. I’ve urged everyone to see them at least once, as I’ve never seen a bad performance.

Four hours prior to our booze-coated vocal harmonizing, my friends and I had been warming up for tonight’s event with shots of Jameson and Flogging Molly blasting through any given speaker. This was our first time seeing Flogging Molly collectively in our hometown after four years (with two of my friends having never seen them before).

We got to The Complex while The White Buffalo were dominating the stage with their folk and roots–infused rock n’ roll. The crowd, I could tell, was very excited and very drunk—at one point, someone had to be taken out of the venue because he had vomited all over himself. That is one of the downsides that comes with a Flogging Molly show—their Irish roots and barroom musical style incite a lot of drinking among their fans, and if you can’t hold your liquor, things certainly can go south—or in my friend’s case, north.

It was an unfortunate event, but it did not define the remainder of the night. The butterflies in my stomach would not settle, and by all means shouldn’t have—I was about to see my all-time favorite band with my favorite people. As soon as the house lights went out and “There’s Nothing Left Pt. 1,” the intro track to their new album, Life is Good, pummeled out of the PA speakers, it hit me that this was reality.

After ambitiously opening up with a song from their not-yet-released album, Flogging Molly’s set was nothing short of spectacular. As they jostled back into familiarity with “Swagger” and “Selfish Man,” King warned the audience that their set would have many twists and turns along the way, and so it did, with oldies and newbies, rarities and staples, crowd pleasers and diehard classics.

I’ve seen Flogging Molly so many times that I could literally call out which song they would play next just by King’s introductions—if he was giving an introduction to their banjo player, Bob Schmidt, it was the cue to play “Drunken Lullabies.” If it was to bassist Nathan Maxwell, it would be followed by the bass intro of “Saints and Sinners.” And if he was paying tribute to his mother, who had recently passed away, it was “Requiem for a Dying Song.” I was pleasantly surprised at the inclusion of “Life in a Tenement Square” and the reintroduction of “Swagger” to the setlist, but was hit over the head when they played “Laura,” a song that King states was their oldest song and had admittedly been neglected for the past few years—the last time I heard it live was my first time seeing them in 2009. They continued on with staples such as “Float,” “Tobacco Island,” “Rebels of the Sacred Heart” and “Devil’s Dance Floor,” and added the brand-new track “Reptiles” to the mix—with its rallying chorus of “We Woke Up!,” it did not fail to spark a reaction from the audience and they danced just as hard.

There is one thing that’s a bit of a drawback with Flogging Molly’s shows—while I love their live performance and always will, their popularity garnered quite a few fans that don’t sit well with their punk rock audience. Those being the meatheads who get so drunk and so belligerent that they ruin it for the people who actually come to see the band—who the fuck moshes to the acoustic segment of “The Worst Day Since Yesterday”?!

As far as I could tell, however, this show was void of such douchebags—outside of two or three guys who shoved too hard in the immobile part of the crowd, it consisted mainly of people dancing around and having the time of their lives, the way they should at a Flogging Molly show. That same feeling of unity reached its altitude when they traversed into “If I Ever Leave this World Alive”—I located all my friends in the dance area and had them all locked with our arms around each other, singing the lyrics to the song that preaches the message of keeping your loved ones close. It kept escalating with their regular show closers, “What’s Left of the Flag” and “Seven Deadly Sins,” and the crowd jostled for an encore with the standard “Ole” chant.

Flogging Molly reentered the stage with “Crushed,” another new song with its perpetual buildup that had the majority of the crowd down on their knees, slapping the ground to the beat and jumping up and down when it picked up. Their set officially ended fittingly enough, as King put it, at the very beginning with the first track off their debut album—the whole venue went into frenzy as Flogging Molly closed out the night with “Salty Dog” and thus brought an end to another successful show. Afterward, guitarist Dennis Casey and accordionist Matt Hensley were hanging around the venue talking with fans, posing for photos and signing every scrap of paper that came their way.

Flogging Molly are a band that should, nay, must be experienced live, whether you’re a fan of their music or not—they are unmatched by any band I’ve seen, and I’ve never seen a bad performance from them. Tonight was no exception—they blazed through all their classics without a hitch, and brought new ones with paralleled intensity. While I will always love their set staples, I really want to see them dust off some old tunes that haven’t seen the stage in years—but I know that no matter what songs they play, Flogging Molly will always be a great time for all! –Eric U. Norris