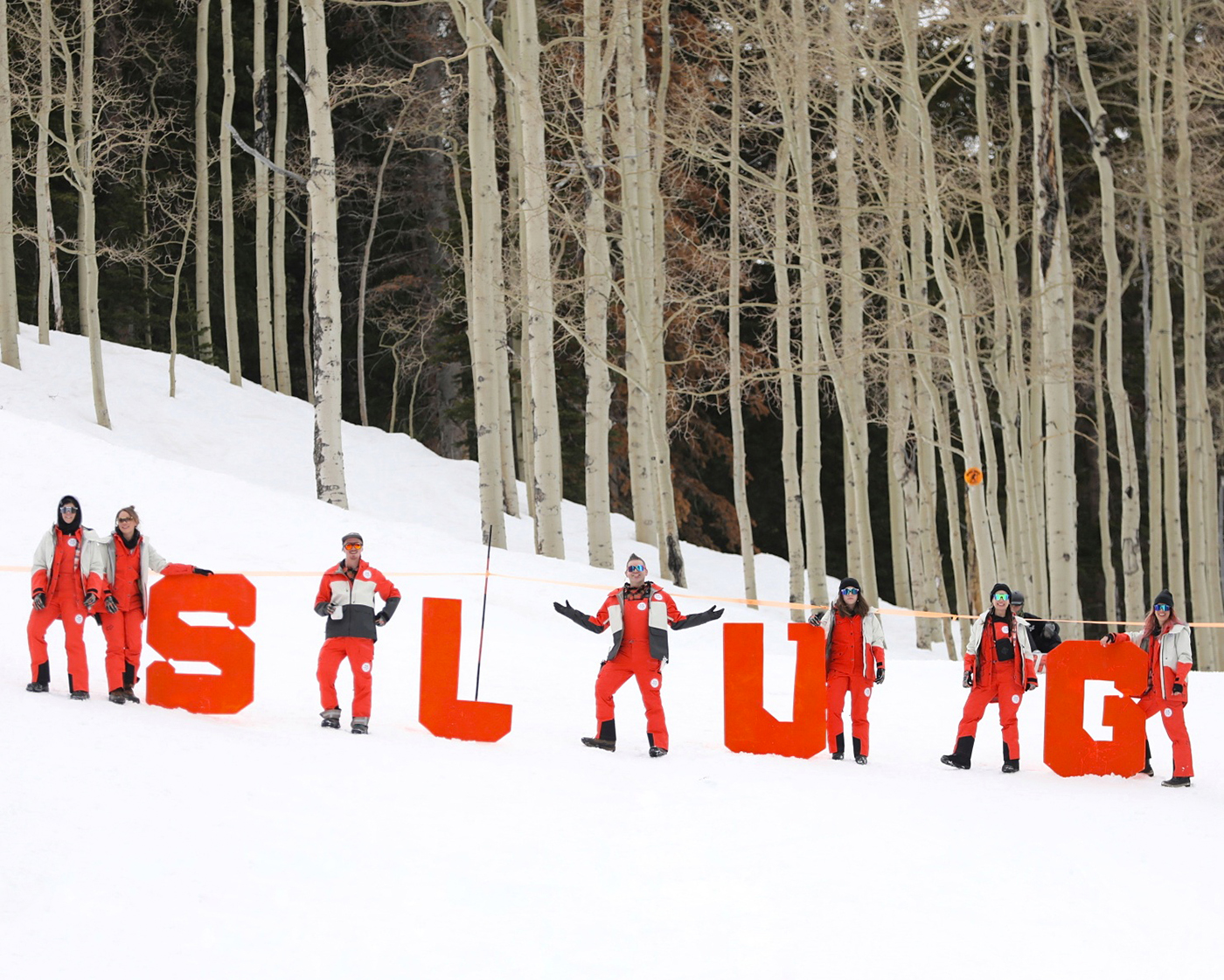 March Meltdown: SLUG Games 2020 Brings the Heat to the Slopes

The 20th Annual SLUG Games competition, this being the Meltdown edition, kicked off this past Saturday at Brighton Resort. For 20 years, this contest has been going down, highlighting some of the best and brightest, oldest to youngest and most creative riding and skiing around. The stage was set up by the Brighton Diggers, which included a crucifix-box-to-rail with wooden spines on either side, an unorthodox and large-scale flat-down-flat round bar, and a step-down with a bonk/wallride immediately off the lip. With a variety of features, there was sure to be no shortage of the variety of tricks that would go down.

With the clouds breaking every so often, giving us some sunshine, the contest heated up with the 17 & Under Divisions. In Men’s 17 & Under Ski, riders kicked off with sending it big time on the jump and getting technical on the rails. These dudes were going for it, getting creative on the box-to-rail and throwing huge airs on the jumps. For the skiers, Carter Wessman stayed consistent and hungry getting tons of drops and stomps to make his way into 3rd Place. Obie Simper kept the variety up by hitting every feature and getting creative with a couple knuckle-hucks of his own, landing him in 2nd Place. Ryan Gillen came in, guns ablaze, with big speed and big disasters on the rails and a huge 360-mute on the jump to land himself in 1st Place.

For Men’s 17 & Under Snow, Isaac Harkness would keep it real in laying down a few 50-50-boardslide variations on the crucifix setup, landing himself a “bronze” 3rd Place finish. Greyson Hawkins was in the mix with a big disaster on the down-rail and big 360 on the jump, excellent enough to get him into 2nd Place. Landing himself 1st Place, Henry Hawkins led the charge right off the bat for the snowboarders with a huge backflip on the jump, followed by a slew of tricks, including a creative up-and-over the wall-ride to a front flip off the knuckle. It was super fun to watch the young guns get into, and there was nothing but love as they all hyped each other up on the hill.

The Men’s and Women’s Open Ski divisions went completely insane with both tricks and bodies flying every which way. Skiers were going huge and technical with more swaps, 270 and 450 variations than I could count. Reid Hendrix stayed in the thick of it, going huge on the jump and styling it out with some rail-tap-pretzel variations, which landed him in 3rd Place. “Skier Jon” (Jonathan Klutsch) was all over the course—he hucked blind-270-switch-up variations on everything, earning him a 2nd Place finish on the day. Konnor Ralph stylishly sent a gap-360 over the flat of the down-flat-down, which was one of the many highlights of his 1st Place finish.

The women were flying high. Cecilia Shader made her way around the rails, staying consistent and stomping every chance she got, which earned her a 2nd Place finish. AJ Cutler crushed the day and hit a huge 720 up-and-over the jump to land 1st Place for the Women’s Open Ski category. Hayley Sweeney mixed it up on the rails with a couple of boardslide spin-out variations and won 1st Place in Women’s Open Snow, and fan-favorite Sam Hobush absolutely went off.

The jump saw a ton of action with a bunch of rodeo-540 variations by the likes of Treyson Allen and Jayden Naylor and a huge, stylish rodeo 720 melon by Jaromie Nolan that would end in a Best Trick award coming his way. Paxon Alexander had a day with technical rail tricks, including a disaster-backside-lip-slide on the big-down and a stylish 720 coming off the jump. Alexander would take home 3rd Place for the snowboarders, and Xander Cornaby and Joey Fava had an absolute grudge match, going trick for trick and putting out sheer production on the down-flat-down and jump. Both were hitting stylish 270 variations and sending over the flat and coming out clean off the down-bar. Cornaby’s creativity and no-foot-caveman ender would land him in 2nd Place while Fava’s consistency and bolts landings of some of the most technical tricks were enough to pull out 1st Place for Men’s Open Snow. Richard Howlard came out swinging, sending a huge front-360 stale fish off the jump, bringing that same energy down on a gap up and over the crucifix, which, unfortunately, nailed his hip and shoulder straight into the ground. After a few moments to collect himself, Ritchie was all good and wished well with a swag bag for Best Crash on the day.

The day was another one for the SLUG Games books, and it couldn’t have happened without Brighton Resort, Brighton Diggers and all of our rad sponsors. Big thanks to Hand Out Gloves, IZM Apparel, Pit Viper Sunglasses, Treefort Lifestyles, SLUG Magazine and Wolfe Goggles for keeping the stoke alive in the sponsor village on the hill during the event. Also, huge thanks to the likes of Armada Skis, Blue Copper Coffee, Board of Provo, Giro Snow, LolëLife, Milosport, Pig and A Jelly Jar, Porcupine Pub, Saga Outerwear, Save Our Canyons, Smith Optics and Visit Salt Lake for the sponsorship support and helping to keep this event alive.

This event could not have happened if it were not for the likes of Jared Winkler, Mouse and the Brighton Diggers crew for getting the setup dialed in. SLUG’s own Executive Editor, Angela H. Brown, and the extremely talented production and marketing teams busted their butts in making this SLUG Games: Meltdown another amazing event. Huge thanks to all of our judges for making the hard decisions that no one wants to, and our MC, Aaron “RAD” Radl (@radrockin), for keeping the stoke high and positive all day! –Steve Goemaat