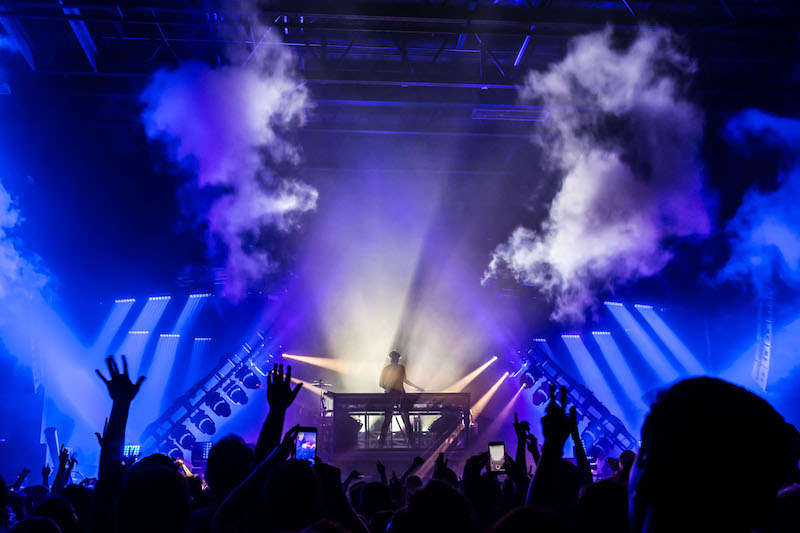 On a crispy fall Salt Lake City evening, electronic fans of all ages gathered at The Complex for a performance from Kittens, Graves and RL Grime. Upon first entering the venue, there was already lots of fans getting rowdy to the opening DJs. Twenty-one-plus fans could enjoy beers and cocktails in separate sections. The turnout for a Monday night concert was pretty surprising; a high-energy crowd filled The Complex for the NOVA TOUR.

Firecracker DJ Kittens excited the crowd, melding her powerful electronic and rap beats. Her performance with RL Grime is one of many, including shows with the likes of Kid Cudi, Skrillex and A-Trak. She spreads the musical love, not only through the performance she gave, but also through the girls-only DJ workshops that she teaches. She set the mood for the rest of the concert, welcoming Graves, a favorite of the locals. Returning after a set at Elevate back in July, his musical talent rallied the crowd; he performed Flume remixes and showed off the immense talent that attracted big names like Kanye West, Kid Cudi and Big Sean. Numbering among those big names, Graves has topped the iTunes charts and, based on the size of the crowd, brings the fans to show it.

The headliner, RL Grime, a newly rising star, welcomed The Complex to the NOVA TOUR. For his first album, he brought his dance world vibe and combined the hip-hop and electronic sounds with the awesome stage production. As the lasers grew more amazing, RL Grime continued to wow the crowd. Playing “Core,” one of his most well-known songs, he was hoisted into the air for the last hurrah of his set. Salt Lake City cheered the wonderful artists, grateful for the opportunity to experience a show like this.