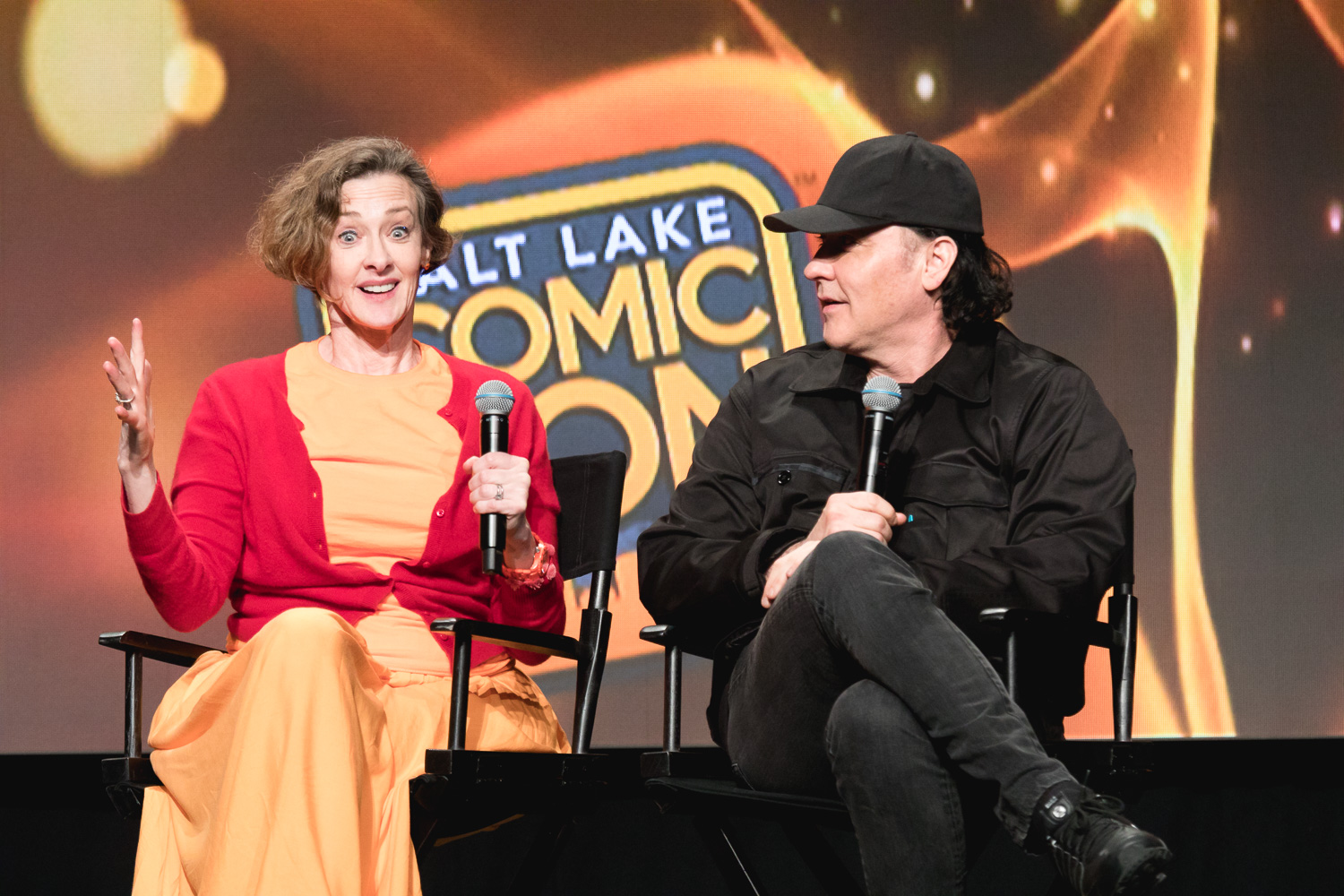 Joan and John Cusack talk about their careers, their beginnings and their favorite experiences during filming. Photo: Lmsorenson.net

The fifth annual Salt Lake Comic Con (and ninth event overall) begins Thursday morning. With the first day usually being the slowest of the three-day event, people had the hallways to themselves, having the full attention of the vendors and artists as well as a great seat at the special guest panels inside the Grand Ballroom. Guests attending Day One were treated to Q&A sessions from Stargate SG-1’s Christopher Judge, Guardians of the Galaxy’s Michael Rooker and Terminator’s Michael Biehn. Each panel filled with fans in various cosplay and asking questions about their favorite film stars, getting some information and occasionally stumping the talented guests’ knowledge with geek trivia.

Day Two of the popular convention started off a bit earlier and with a bang with TV and film legend Dick Van Dyke. The 91-year-old actor was greeted onstage by Comic Con‘s Bryan Brandonberg and Dan Farr. Van Dyke was accompanied by his wife, Arlene Silver, and the three, along with the crowd, began to sing “Happy Birthday” for her special day. Other panel guests included Gates McFadden and Will Wheaton from the hit TV series Star Trek: The Next Generation, and if their onstage reunion weren’t enough, a custom-made Funko Pop figurine was auctioned off to benefit hurricane victims, selling for over $700.

Continuing with the Grand Ballroom guest list were Jewel Staite from the short-lived, much-loved TV show Firefly; the Back to the Future stars Christopher Lloyd and Tom Wilson; and the iconic brother-sister duo that is John and Joan Cusack. The audience was very much appreciative of the thoughts and experiences shared by all, especially from Joan Cusack telling audience members she was “terrified” starting out. Her brother shared his luck in the beginning of his acting career as he was doing stage production in Chicago when he “heard people were hiring for teenagers.” Outside of the Grand Ballroom, attendees were also invited to additional activities such as the Geek Show Podcast, recorded live at the Con, autographs from their favorite authors, artists or actors, and the chance to treat themselves to a piece of artwork or craftwork from the Artist Alley.

Day Three began packed and continued throughout the day with guests by the thousands entering and exiting, getting a bite from the plethora of food trucks or local restaurants in the area. The vendor floor and Artist Alley were filled, with people standing shoulder-to-shoulder throughout the event and each conference room in the building hosting their own mini-experiences. Back at the Grand Ballroom, more small- and big-screen talent continued with the fan-driven Q&A with Elijah Wood from the Lord of the Rings trilogy, Zachary Levi from the Chuck series and Stephen Amell of The Arrow.

Along with the shopping opportunities, the cosplay interaction, the fans and the geekdom, these guests came together for a weekend of sci-fi, anime, comedy and more. The action-crazed, fun-filled experience continued to be a draw for people of all ages.