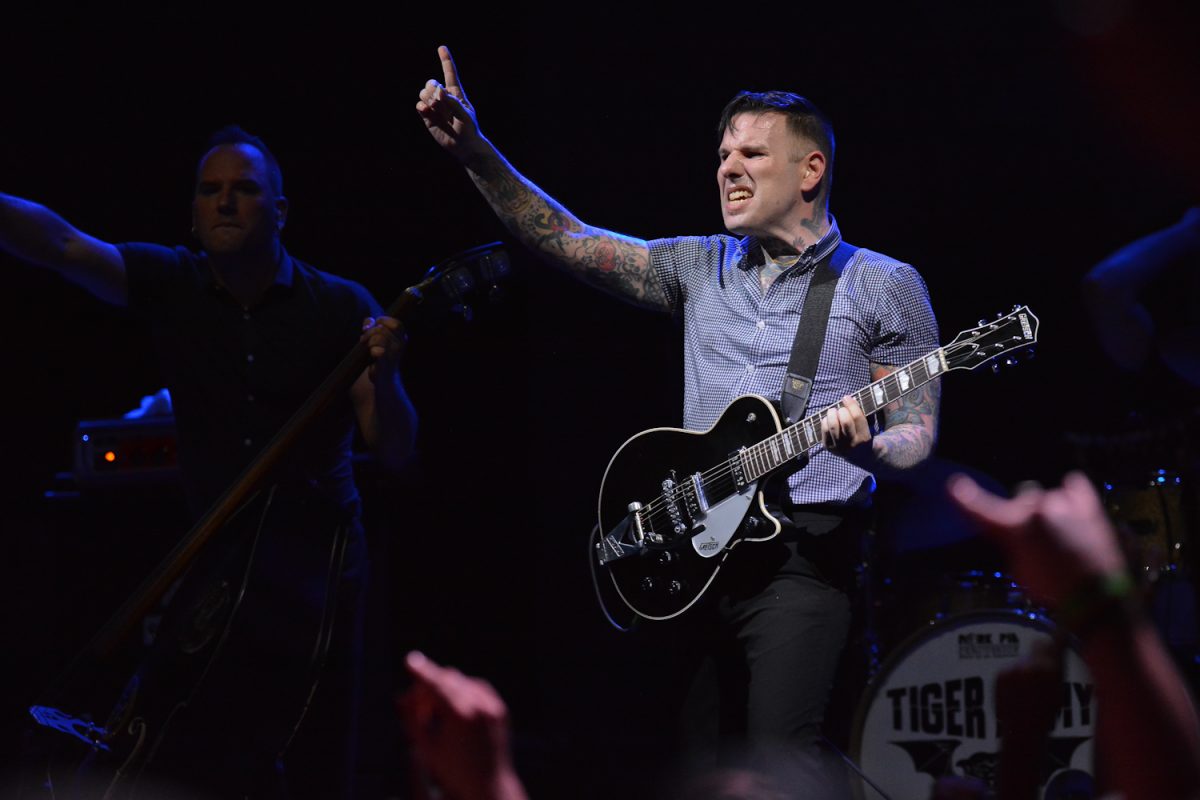 Tiger Tiger Burning Bright: Tiger Army @ The Complex 07.08 with The Delta Bombers, The...

When I was just out of high school, Tiger Army were my band. After first hearing them, I changed the way I dressed, I started tracking down psychobilly and rockabilly records, and I certainly started thinking about music differently. So for me, going to see the band live at The Complex was like visiting with an old friend.

The first band of the evening was The Limit Club, a young psychobilly band, and it did my heart good to see these fellas grabbing influence from bands like Batmobile, The Quakes and even the band they were opening for. I’d definitely recommend them to anyone out there looking for fresh blood in the psychobilly realm, where it’s certainly been needed.

Next up was a band I found to be sort of an anomaly. The Delta Bombers have been circling the rockabilly world for awhile now, and while I have excuses, I have never really paid them much attention. Seeing them pound their hypnotic swamp-rock rhythms, though, into a crowd that was more than happy to fall right into the intense grooves these boys were putting on, was surprising. Looking like they had just left a biker rally, this four-piece hit hard and only let up slightly to play a couple more country-tinged tunes. The gravel-voiced lead singer, Chris Moinichen, demanded the audience’s attention. They finished their punch-in-the-face of a set with a cover of Howlin’ Wolf’s “Evil,” which felt blisteringly appropriate.

Finally, time for the main event of the evening: Tiger Army. The familiar whine of Hank Williams’ voice rose through the room, a warning for any longtime fan that we were about to begin. For me, Tiger Army are a visually fascinating band to watch. As a trio, they’re easy follow along musically, seeing the interplay of the rhythm section, made up of Mike Fasano on drums and Djorde Stijepovic on stand-up bass, who build a great foundation for the centerpiece, Nick 13, to bring his song to life. Now, I’ve seen Tiger Army about a dozen times, and this is my second time seeing this lineup, but what I noticed here is how Nick’s guitar playing has taken some large leaps. While he has always been a solid player with great tone and color, his ability to jump from nuanced leads to big-chord sounds and and vigorous rhythms was on another level.

The band jumped from new songs to old ones, and hearing the newer material made me appreciate Tiger Army in a different light, while hearing earlier songs like “Temptation” sent me back to my youth. My only complaint is that so rarely have they over the years brought a pedal steel player on tour to accompany the obligatory country song they always work into their set. This time, the song was “Outlaw Heart,” which was nice to hear. While I understand it’s not always logistically possible, some steel guitar would have sold the anguish of the tune better. The only cover Tiger Army played was a favorite instrumental of mine, “Rumble” by Link Wray, and it was deftly handled—a nice touch to their set.

After the show was over, I couldn’t help but think I was fortunate to have had this band in my life. They have added so much to my musical palate. It might sound trite, but if it weren’t for Nick 13 and this band, I may never have delved so deeply into roots music and found the music I’m most passionate about today. I will always hold a special place for Tiger Army, and that will never die.
–James Orme