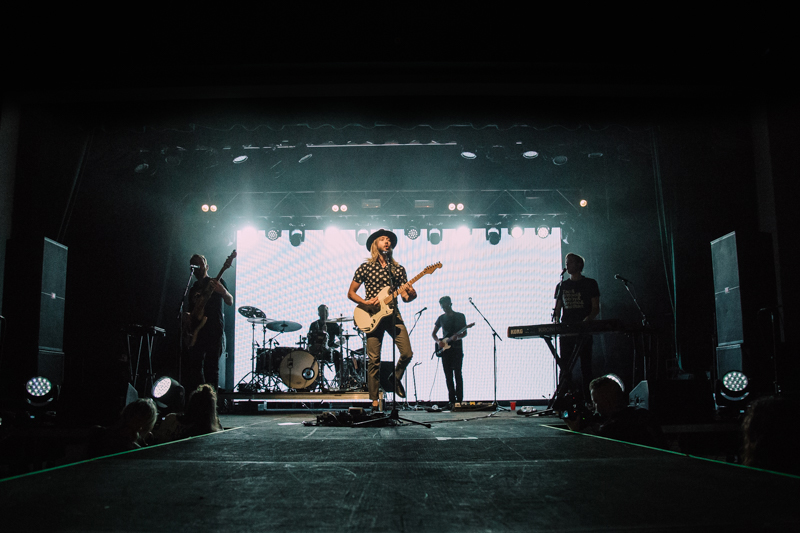 Moon Taxi owning the stage at Night Three of the Twilight Concert Series.

The third installment of Salt Lake City’s Twilight Concert Series on Aug. 30 saw a delightful set from Nashville indie-rock band Moon Taxi with support from DJ Jarvicious and local rock band Brogan Kelby. Brogan and his band played an enthusiastic set of original music to a small crowd, but it was a crowd full of dedicated fans who were singing melodies right back to the band. Even for those unfamiliar with the band’s music, it was hard not to get swept up in the energy and positivity of the show. Concert-goers killed time between sets by playing giant beer pong or patronizing CupBop to the tunes of DJ Jarvicious. The night was relatively low key compared to past nights’ performances from Diplo and Robert DeLong. Fans on the lawn had a little more breathing room, and lines for beer were noticeably shorter, but things picked up when the sun went down and Moon Taxi took the stage.

Fans pressed against the railing and sang the bands lyrics back to them with outstretched arms. It was a real, holistic rock n’ roll show led by a group of tried-and-true indie musicians. Fans flooded the streets after the show buzzing with energy and headed home on scooters, Green Bikes, Lyft, and Trax, excited for next week’s installment.