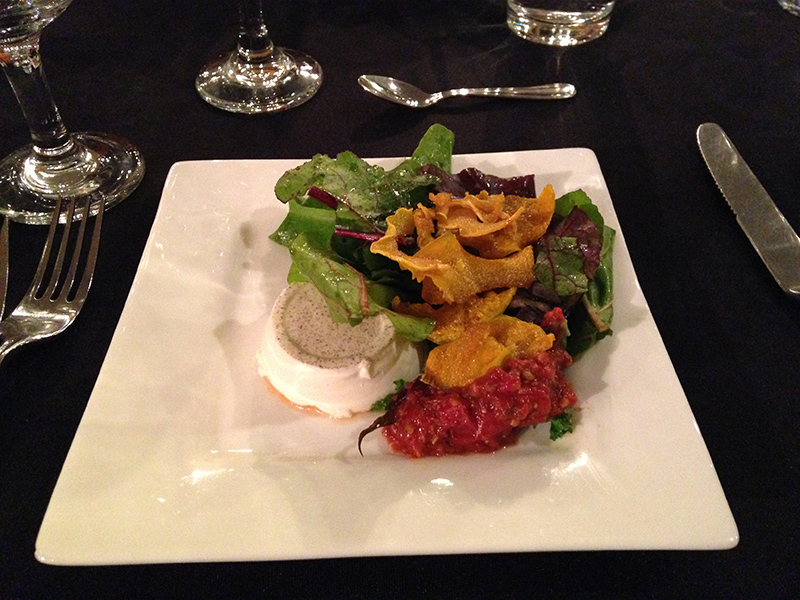 There aren’t many food crusaders who do what Slow Food Utah does. Through their microgrant program, Slow Food financially supports organizations that focus on Utah’s culinary sustainability. Last year’s recipients include community gardens at Rose Park Elementary School, Clifford Farms and the Murray Greenhouse Foundation, a community garden for those with developmental disabilities. As a nonprofit, Slow Food Utah throws excellent dinner parties to supplement their microgrant funds, and the Feast of Five Senses is one of their most popular. This means that attendees get to sit down at a five-course meal prepared by some of the state’s best chefs while basking in the comforting knowledge that they’ve helped Slow Food Utah contribute to another worthy cause.

This year’s Feast of Five Senses transformed the Jewett Center for the Performing Arts on the Westminster College campus into a lushly furnished dining area, complete with place settings and autumnal centerpieces. Each year, the event’s menu is organized around a specific theme—this year it was “Our Family Table”—and it was interesting to see how each chef incorporated the theme into their food. The first hour of the Feast of Five Senses consists of mingling with other locavores while sampling appetizers and cocktails. As the overture to an evening of fine local food, the spread was a fine representation of fall cuisine. My clear favorite was the Organic Chicken Liver Paté prepared and served by Tyler Stokes of Provisions, one of Utah’s up-and-coming new restaurants. The last time I tried food from Provisions, it included foie gras topped with cherry Pop Rocks, and it blew my mind. After trying this spectacular little bite of silky pat spread across a slice of toast and sprinkled with smoked bacon and pickled fall vegetables, Provisions has officially shot to the top of my “must visit” list. The paté and the bacon shared salty subtleties while the pickled veggies and cider reduction cut through the flavors with sweet acidity. Honorable mentions came from Bowman Brown of Forage whose Mushroom Tart and Tea explored the complex, earthy flavor of our favorite fungus; and Jerry Liedtke of Tin Angel, who served up some adorable spanakopita, stuffed with Greek chicken and green olives, which were tiny pockets of intense Mediterranean flavor. At the end of the cocktail hour, I had already tasted some spectacular food that came directly from the hearts of these fine chefs. As this was just the prologue to the Feast of Five Senses, I eagerly awaited the upcoming dishes.

As my wife and I made our way to our randomly assigned table, I couldn’t help but notice the detail that went into furnishing the event. The lobby of the Jewett Center had been converted into a posh dining room. Usually, these conversions betray the event, but the arrangements and furniture perfectly matched the evening’s atmosphere. While we settled in, Gwen Crist, the current chair of Slow Food Utah’s board, invited the evening’s chefs to explain the inspiration behind their food. It’s not often that I get to applaud a chef after eating their food, but it’s something that I wish I could do more often. This was especially resonant as the dinner chefs discussed their own familial food experiences while servers brought out their culinary contributions to the Feast of Five Senses.

The first course was a salad that Jen Gilroy of Porch had prepared with local fall greens and an heirloom tomato confit. The soul of this dish was in the panna cotta ranch dressing that was prepared with goat’s milk from Drake Family Farms. There are few things as comforting to my soul as ranch dressing, and to see it reinvented as a creamy mound of silky goat cheese spoke directly to my inner child. When the dressing met the tomato confit, the salad became more than just an opening course. Up next was a dish prepared by Elisabeth LaFond of Café BonAppetit and a crew from Westminster College’s Culinary Arts Program. They served up a Short Rib Ravioli with Blistered Cherry Tomatoes, but this was one of the more shaky moments of the evening. The crew’s prep work was loud enough to carry into the dining area, which made it difficult to hear the speakers, and the food arrived a little colder than I would have liked. Flavor-wise, the ravioli were tasty and the cherry tomatoes had a rich, smoky flavor that paired well with the short rib. For the third course, it’s customary to serve a bit of sorbet as a palate cleanser. While I’ve never quite liked the idea of sorbet in the middle of a meal, Amber Billingsley of 3 Cups was there to smack some culture into my mouth with her Winter Squash Gelato topped with Quince Sorbetto. Billingsley has carved out a solid reputation as a gelato alchemist with her work at Vinto, and one bite of this cup of frozen gold is exactly why. The sorbetto and the gelato mixed familiar fall flavors of squash with a sharp sweetness from the quince, but the marshmallow fluff and herbed candied pecans on top turned the whole dish into a bite of Thanksgiving. It was definitely the unexpected dark horse of the evening—what I would give to have a gallon of that in my freezer right now.

Course Number Four, compliments of Current’s Logen Crew, was a gorgeously caramelized meatloaf prepared on a substantial foothill of mashed potatoes and local vegetables. Servers brought the humongous portions out on platters that attendees were encouraged to serve themselves. I liked this because I felt no shame in taking more than was socially acceptable. The meatloaf was made from ground beef and pork from Taylor Farms, and the outer crust built upon the traditional ketchup and brown sugar flavors with a spice blend that unfolded like gift wrap. Nothing soaks up residual meatloaf flavor quite like mashed potatoes, which made the entire meal a testament to the wonders of high-class comfort food. Finally came the dessert course, delivered by Romina Rasmussen of Les Madeleines, which was Gingerbread with Brandy Poached Pears and Chocolate Gelato. My favorite aspect of this dessert was the way the flavors intensified by eating more of it. At first, the gelato didn’t seem to mix well with the gingerbread, but the more I let the soft gingerbread soak up that dark chocolate gelato, the more it became an excellent way to wrap up the Feast of Five Senses.

The evening concluded with the presentation of the Snail Awards, which recognize members of Utah’s food community for their work in the field of sustainability. Adam Kreisel, an innovative force for good at Chaia Cucina Catering, Jon and Kasey Francis of Amour Spreads and Pete Rasmussen of Sandhill Farms all received awards this year, commemorating their achievements with locally sustained food.

Thanks are definitely due to Slow Food Utah, the chefs that dedicated their time and talents, and the attendees that showed up to support the ideal of keeping Utah’s food local and delicious. It was a spectacular evening of unparalleled food and community. Keep up with the other events and programs that Slow Food Utah has in store at slowfoodutah.com.