The Tundra press has recently gained an impressive reputation as being less corporate-minded and more supportive of comics creators’ rights. This, coupled with a willingness to publish unusual and high quality material, places the company among the finest publishers of comic books. The recent appearance of Tundra UK, which has been printing quality comics from British creators, is another plus for Tundra. Below are reviewed three of Tundra UK’s titles:

Cartoonists Glenn Dakin and Phil Elliott have been two of Britain’s most (unfairly) ignored and talented comics creators since the 1980’s. Thus, the appearance of their latest trifle, Greenhouse Warriors, is a positive delight.

WARRIORS focuses on a team of unlikely superheroes. Seems the Warriors are the creations of one Dr. Glass, a brilliant scientist devoted to saving a future earth plagued by environmental and ecological collapse (sounds eerily accurate, doesn’t it?). Glass’ work concerns sentient plants and the Warrior’s most successful phase of that program.

Unfortunately for Glass, the government wants to lay its hands on his research, so the Warriors attempt to pass for humans. The Warriors also have definite wills and personalities of their own.

There’s much more here than can be described, and I loath to give away too much of the plot. Suffice to say that Dakin and Elliot have outdone themselves here. There is an environmental message, of course, but without the usual preachiness. Additionally, there is sly wit and an undeniable charm. Elliot’s outstanding drawings manage to express silliness, warmth and, coupled with unpretentious and witty story, evoke pleasure. 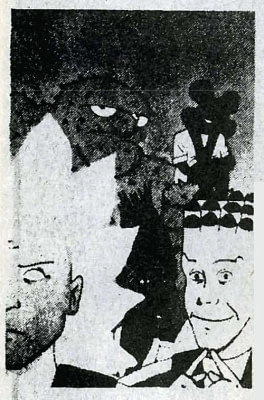 Also included in issue #1 is another in a series of “Mr. Day and Mr. Night,” tales by Dakin and Elliot. While a weaker example of their material, the story is whimsical and breezy.

Don’t be negative until you’ve tried this comic. Mere description by this critic cannot begin to reveal just what a gem GREENHOUSE WARRIORS is. Hopefully, Tundra U.K. will follow up with a collection of Dakin & Elliot’s “Man From Cancer” material. (B&W,$2.95)

Originally serialized in Britains “Blast!” magazine, Lazarus Churchyard has appeared as a three-issue series. And, judging by the first issue, Tundra UK was wise to pick the first issue up.

Created by writer Warren Ellis and artist Matt  “D’Israeli” Brooker, Churchyard concerns the title character, a virtually immortal man whose body had been fitted with a kind of living plastic which can be molded by Lazarus’ thoughts. Churchyard exists in a future very much dominated by the “cyberpunk postulations of authors like William Gibson and Bruce Sterling.”

Issue #1, “The Virtual Kiss,” features Churchyard being contracted by a mega conglomerate, Isis-Elek, to discover what (or who) is killing the company’s cyberspace operators. For Lazarus’ part, he has been promised that Isis-Elek has equipment capable of shearing his human body away from his plastic components, allowing him to become human again, and eventually die.

But things are not quite as they seem, and Lazarus soon finds himself jacked into cyberspace and confronting hidden danger. Author Ellis has a firm grasp of cyberpunk style and has created a fast moving and clever universe. A plus is the thoroughly pitiable Churchyard, who winds up ultimately admirable and sympathetic.

But the high point is rendered D’Israeli, whose unique style previously graced Vortex’s “MISTER X”. D’Israeli produces powerful and strongly stylistic drawing that propel and enliven the tale. The art may not appeal to fans of traditional “superhero” style drawing, but it is wonderful.

Previously printed in small-press runs in the UK as BIC, SKIDMARKS, is the “simple” tale of a boy and his bike. Or is it? Created by Ed “ILYA Hillyer, SKIDMARKS features Bic, a down-on-his-luck young English youth who fancies a bicycle in a shop window , and, by chance, stumbles on a method to gain said bike—but is it worth the cost of Bic’s soul?

Actually, this is a fairly simplistic overview of the crux of this three-issue series. There is much more than just Bic’s conscience ruminations. It’s a tale about being young and disillusioned, dreaming and a whole bunch else.

All of this is captured admirably by ILYA, whose work has been mostly seen in collaboration with writer Eddie Campbell on “Deadface” and “EYEBALLKID.” Here, though, ILYA is working on his own creation, and the skill and personal belief show. The art is slightly cartoony but manages to convey emotion and power just the same. Frankly, the drawings are perfectly suited to the subject matter, carrying the story and rendering it believable and deep.

Even more surprising, though, is ILYA’s writing ability. This seemingly simple tale conveys messages about honesty, hopelessness, the giddiness of being young, etc. with delightful abandon. After reading this, one comes away with the sensation of having been enriched and enlivened, something very few comics can manage. All this is testimony to ILYA’s supreme skill.

Honestly, I cannot gush too much about the merits of SKIDMARKS. This is the kind of story comics were made for, not fanboy, adolescent, male power trips. Get the hint and buy this comic. You’ll be glad you did. (B&W, $2.95)

Those familiar with “cool” comic books are no doubt acquainted with Canadian Chester Brown’s Yummy Fur. Now, thanks to the efforts of Vortex Comics, there is a collection of the “Ed” material from an early YF issue entitled “Ed The Happy Clown—The Definitive Ed Book.”

Ed features the adventures of the title character, a likable, if ultimately hopeless, young clown. Seems Ed is the stereotype of a clown, daydreaming through reality, virtually dripping with naiveteuntil cold, hard, solid life slaps him in the face.

In this case, Ed finds himself Incarcerated following a misunderstanding with the police centered around the Tooth Fairy and an amputated hand (I kid you not). It isn’t long before Ed’s life takes a turn for the worse, though. Ed escapes from prison to find himself allied with a female vampire named Josie, is captured by pygmies who live under the sewers and handicapped by having the head of Ronald Reagan on the end of his penis …

If you can believe it, though, the story gets even stranger, involving existential crisis, the unfairness of a universe governed by a male-deity, parallel universes, a vampire hunter and more. All of this is encompassed in Brown’s bizarre, baffling and thoroughly enjoyable plot.

Anyone who hasn’t encountered Brown’s work is in for a treat with the release of this book. It is weird but strangely and undeniably irresistible. Brown’s immaculately rendered cartoons propel the story beyond mere words and into the realm of waking dreams. The story defies description and pigeon-holing; the nearest category into which this work can be stuffed is surrealism, but even this term fails to convey the sheer pleasure/disgust, anguish/joy, laughter and sorrow Brown evokes.

But even those who own the YF issues containing the ‘Ed’ storyline may be in for a treat. Brownstone over the material cannily and excised some annoying digressions and tacked-on a new ending. While this may be annoying to completists who feel cheated by six new pages of material, I can only scoff. The material removed from the tale was, frankly, inferior and distracted from the story. The re-direction this conclusion adds is much more logical (if that term could be applied) and satisfying, not to mention much more true to the direction Brown was leading. However, I’ll leave it up to Brown’s fans and completists to decide whether this “definitive” version is superior or inferior.

Honesty compels me to admit that at $12.95 for 215 pages, Ed is rather expensive, but it is money well-spent. Perhaps only in the work of Dave Sim and Eddie Campbell can the sheer potential of comic book storytelling be expressed, and Brown’s ED . . . materials similarly powerful. But the book should also appeal to those disinterested in comic books for its brash-ness and willingness to skewer reality on the pointed horns of chaos.