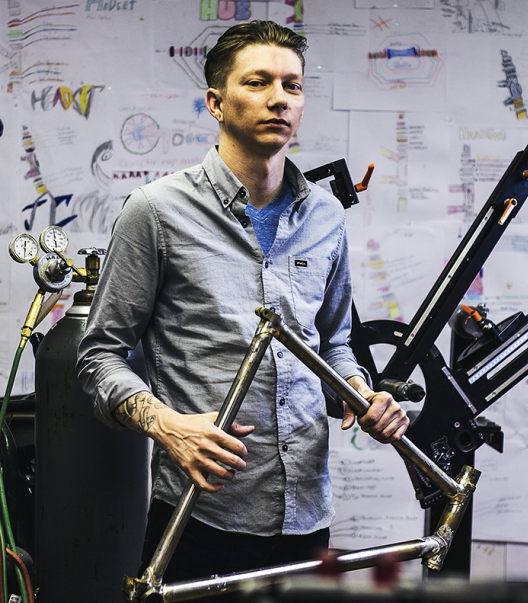 “As a kid, I had a dream—I wanted to own my own bicycle. When I got the bike, I must have been the happiest boy in Liverpool, maybe the world. I lived for that bike. Most kids left their bike in the backyard at night. Not me. I insisted on taking mine indoors and the first night I even kept it in my bed.” –John Lennon

The bicycle has a place in the annals of history and the hearts of anyone who has ever had the pleasure of riding one. The freedom it exemplifies and the simplistic motion of circles turning circles carries the rider toward countless opportunities throughout a lifetime. For many, a bike may be a form of conveyance or a method of exercise. But for those individuals who truly see the bicycle as mankind’s perfect machine, there is special meaning and attachment that transcends tradition.

Michael Crum is one such individual. His affinity for bicycles began during his childhood in the small town of Mountain Home, Ark. During his high school years, Crum competed as a trials rider (a discipline that involves performing gravity-defying feats of balance and timing) and enjoyed mountain biking. At age 19, an article he read in a cycling magazine about building frames intrigued him. These interests led him to attend the United Bicycle Institute and study a variety of techniques from frame building to mechanics and even shop management. “I learned how to build a frame at UBI, but at that point, I shouldn’t have really been building bikes for people. I was young and not very focused,” said Crum.
He came out of those courses and decided to move on to art school in Memphis, Tenn. Dabbling in metal sculpture allowed Crum to refine his techniques and learn more about processes and materials. After accruing more mileage outside of school, Crum volunteered at a small bicycle co-op and worked as a shop rat at various places. It was in this environment that his passion for cycling was allowed to blossom further. “A customer at a shop I worked for took an interest in me and understood my aspiration to be a frame builder,” said Crum.
With financial backing to procure tooling and materials, Magnolia Cycles was born.
Crum began building custom bike frames and was able to keep his business going for a short time before the economic collapse of 2008. Although his frames were one of a kind and quite aesthetic, the market for his items grew smaller. He continued working in the cycling industry in various capacities, and eventually wound up moving to Salt Lake City. During the 2012 Twilight Concert Series, Crum was retrieving his bike from the valet when a volunteer noticed his elegant machine. That volunteer happened to be the Executive Director of the Salt Lake Bicycle Collective at the time, Jonathan Morrison, and he inquired about Crum’s experience as a frame builder. The two got to talking, and Crum was offered to come share his knowledge and become an instructor for the newly added frame-building class at the Collective.
Crum helped the organizers revamp their syllabus and even sold his tooling to the Collective in an effort to make the course more accessible for the average cyclist.
The current incarnation of the frame building class revolves around a comprehensive two- or three-month program where aspiring builders can learn the fundamentals. Class sizes are limited to six students and two instructors, and the cost is about $1,000. From week one, the students begin by taking their body measurements and creating a drawing of what their frame will look like. Then they cut the steel tubing to size and begin the intricate process of constructing the frame.
The goal of the course is to instruct students in the methods of lugged construction. This technique is relatively basic and can be learned in the time allotted. A lug is a way of fitting the tubing together using a metal sleeve at each joint. Students begin by constructing the front triangle out of four pieces of tubing and lugs. They then use a bonding agent to fuse the joints and create a solid piece of metal. The process is repeated for the rear triangle. Once the frame is completely lugged and bonded, the finishing touches and cleanup are performed. Each frame is unique and customized to each student and can be painted locally or left au naturel.
Each participant can now build the frame up as they please, using components of their choosing. They are also encouraged to utilize the Collective’s facilities and staff to help them along the way. Once complete, it’s time to ride. “It’s exhilarating and a little nerve-wracking, taking a frame you built out for its first ride,” says Crum.
The Collective will be offering their frame-building course starting around the beginning of summer. Although still in its infancy, the program has a lot of potential, and the goal is to offer several classes that focus on other frame-building techniques, like fillet brazing. These additional options will, hopefully, attract repeat students who want to try their hand at something a bit more challenging. “I love the craftsmanship and hands-on experience of building a frame, and it’s great when you get to have a finished product to keep at the end of it all,” said Crum.
For more info about upcoming courses, check out bicyclecollective.org or stop by the shop at 2312 S. West Temple.
Photos: