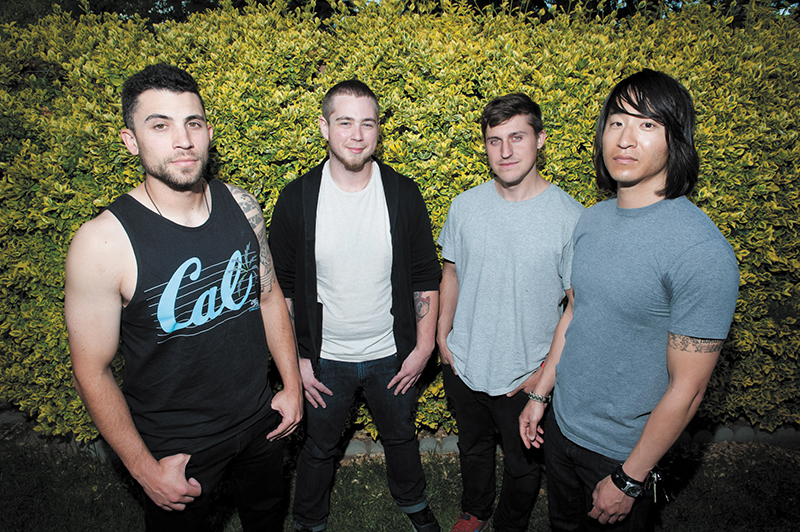 This month’s Localized will feature the heavy-hitting, poetic antics of Sights, followed by the addictive melodies of Larusso and Heartless Breakers headlining the show. If you miss the angsty days of the mid ’00s when Brand New and Taking Back Sunday dominated the airwaves, you better be at Urban Lounge on Thursday, July 16 at 9 p.m.—the show is free and sponsored by Uinta Brewing Co., KRCL 90.9 FM and Spilt Ink SLC.

Larusso is a name that has been floating around the local scene for years, to the point where they have become almost synonymous with Salt Lake City. Since their inception in 2004, Larusso have maintained a lighthearted yet earnest pop punk sound, reminiscent of Bleed American–era Jimmy Eat World. While other similar bands have faded from the scene, Larusso have consistently maintained their sound. “We never really stop writing,” says vocalist/guitarist Aaron Condrat, saying that the reason Larusso have been going strong after such a long time is “refusing to give up, refusing to play it safe.” The band’s most recent release, Life in Static, does just that, mixing upbeat melodies with fervidly profound lyrics, nostalgically recalling bands that reigned supreme on both pop and alt rock radio in the ’00s, such as Yellowcard and The Ataris.

In what can only be described as a Dread Pirate Roberts–style takeover, Larusso are devoid of all of their founding members—Condrat joined the band soon after it started, as his brother was a member at the time, and kept the name going after most of the founding members left to pursue other interests. Guitarist Nick Sasich joined shortly thereafter, teaming up with Condrat for acoustic shows. Self-professed “Larusso fan boy” and bassist Tyler “Fizzy” Grundstrom followed with drummer/production wizard Justin Trombetti joining as the most recent addition over two years ago, creating what Condrat calls his “most solid lineup.” Through the many reincarnations of Larusso, the band has noticed a change in the local scene. “You see this movement away from the alternative rock of the 2000s and that pop punk sound, moving into that indie direction or harder direction,” Grunderstrom says. “The sound we emulate has become less and less mainstream.” Condrat adds, “We like it that way, though.” While they were once one of many alt-rock bands on the scene, their steadfastness in that genre has paid off, as there are not many bands left who are creating the sound that Larusso have perfected and made their trademark.

Being one of the longest-running and more locally respected bands of Salt Lake, Larusso maintain a rather large, loyal fanbase. “What’s been cool is that we haven’t seen a drop off in attendance to our shows,” says Sasich, “but as a genre, I think we’re one of very few who still can do that here.” Condrat considers this success as a testament to each member’s dedication to making music and to keep Larusso a priority: “It’s taken me a long time to find the guys who I feel confident about … that are as invested in this as I am,” he says. “That only just fuels me more so that I’m not letting them down.” Sasich describes the songwriting process as “democratic,” saying, “For someone who knows us really well, I think you can probably hear a little bit of each of us in [the album].” The collaborative process in which each musician has equal weight in how each song sounds has produced Life in Static—one of Larusso’s best and most well-received albums to date.

Life in Static is an album in which any of the songs could easily be played on the radio and no one would ever suspect that the creators were locally grown. Condrat’s voice is effortlessly melodic, and he sounds upbeat despite some of the more emotionally charged lyrics, while Trombetti’s crisp yet artfully present drumming supports but does not overwhelm Condrat’s vocals or the persistent guitar melodies. There is a certain charm to songs like “Set Phasers to Fun,” an acoustic piece that involves all of Larusso singing, “Take a step back / I’ve got too much to say / checking off, checking out / far and away.” Larusso have a positive energy and catchy, infectious sound that is sure to have you singing along after the first listen.

Though Larusso are a well-known band in Salt Lake City, there are no overblown egos for the band who describes themselves as “the garage band next door.” Sasich says, “We don’t take ourselves too seriously”— for them, being a part of the Salt Lake local scene is about supporting all local music, and not just one genre. Though they’ve shared stages with bigger acts such as Neon Trees and The Almost in the past, they’re more interested in playing shows simply to have fun rather than to accumulate a large audience. One show they played in Olympia, Washington, still sticks out to them. After all of the other bands bailed, Larusso was left to play a set with only one homeless person and one dog in the audience. However, the crowd quickly grew to about 30 people, most of them homeless: “They were all just rocking out to the music—two of them sang Green Day with me,” says Grundstrom. Condrat adds,“It was a powerful moment for me personally. We didn’t make any money, but it’s one of the best memories I have of that tour.”

Larusso are currently promoting Life in Static, which can be found on larussorock.com. Their aim is to keep touring and to reach out to local artists of all genres—as Sasich says, “Give the local music scene a chance … Go out and see shows and support local.” What better way to do that than to catch them at Urban Lounge on July 16!