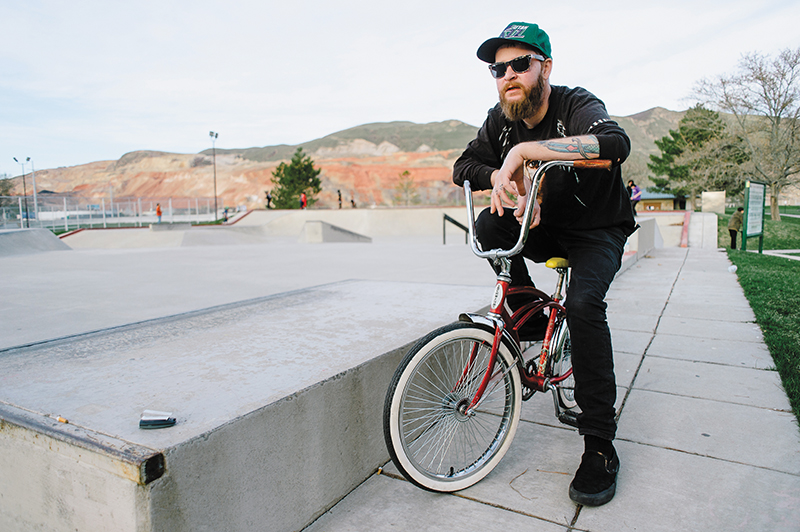 It’s my birthday this month, and I’m turning old. I don’t want to divulge exactly how old, so here’s a cryptic hint: I’ll be drinking 40-ounces of King Cobra malt liquor to celebrate. Birthdays are odd milestones of sorts. There have been times in my younger years when I didn’t even consider reaching this milestone. I still adorn myself in pretty much the same wardrobe from my early ’20s, and I’m still uninsured.

There were plenty of times where the younger, punk rock me lovingly embraced the “live fast, die young” lifestyle. Not worrying about the future whatsoever seemed to be part of the uniform to the point where, now, my credit score is totally fucked these days. The fact remains: I’m older, though I don’t feel any wiser. But I probably am.

Although I’m not quite to the age of required prostate exams or needing regular fiber in my diet (I’m still living off of pizza and Jim Beam for the most part), it’s apparent that there’s a lot of shit I used to be able to do that I just can’t anymore. And you know what? That’s OK. Getting old is inevitable. And like my old grandpa used to say to me when he was in his 90s, “This old-man shit sure isn’t for [wieners].” Boy, was he right.

SLUG asked me to write about some stuff that I can’t do now that I used to be able to do in my younger years. Obviously, the first thing that came to my whiskey-soaked brain was where I can drink. I think there are basically four phases of serious drinking in regard to age. So I’ll give you the CliffsNotes version.

Phase One: You’re in junior high and you steal booze from your friend’s parents’ liquor cabinet, have no idea how to drink and puke everywhere.

Phase Two: You get older, end of high school, early college years. You drink at house parties, have no idea how to drink and puke everywhere.

Phase Three: You start going to bars and do that for like the next 30 years of your life, have no idea how to drink and puke everywhere.

Phase Four: You get old, realize how much money you wasted drinking in bars, start drinking at home by yourself, and still have no idea how to drink and puke everywhere—then die happy.

Another thing I can’t do at my present age is engage in street fights. It’s not like I ever did in the first place, but now, if approached with confrontation, I have to rely on my keen wits to de-escalate the situation. Or I can just use a taser. But pretty much any young stud 18–25 could probably fuck me up in matters of fisticuffs these days. I can’t even have a pretend slap fight with a friend or play-wrestle with my drunk buddies anymore for fear of pulling a hamstring. So it’s best that I start being nicer to people now that I’m old.

I sure as shit can’t skate like I used to. This one actually bums me out a bit. It’s still fun to roll around the neighborhood—and I never want to morph into the “Dude, I used to skate” guy because that guy at the skatepark is just as annoying as Weird Old Guy at the house party. But a fact’s a fact—I said goodbye to my switch heelflips years ago. And hucking myself down a flight of concrete stairs just doesn’t have the same appeal to me personally as it used to. Sometimes it’s easier to roll to the skatepark on a bike to watch the young bucks.

I still love seeing how crazy fucking good every kid seems to be at skateboarding these days, though—because it didn’t seem like that when I was young. When I really got into skating 25 years ago, it seemed like there where only may be 10 or 15 kids who were super good in the city. There weren’t skateparks back then, though, and skater kids would still get spit on. Sure, skating’s more glamorous now, but I personally think it’s fun to see the progression. OLD! (Side note: I still don’t want to see that shit in the Olympics.)

Another side effect of getting old is losing friendships to a couple of really shitty things, death and kids. Sorry to be a debbie downer, but as you get older people will die and have kids. Either way, you won’t see them again.

Here is another brief list of things I can’t really do anymore or get away with due to age, but things I did in my youth: vandalism, shoplift from Wal-Mart, steal beer, smoke weed in a church parking lot, be in a crew or run from the cops.

Just to clarify, none of the side effects in this article suck. It’s just how it is. There are lots of awesome things about getting old, like I can rent a car now. And I can finally claim old-school, and there may be a smidgeon of street cred to that.