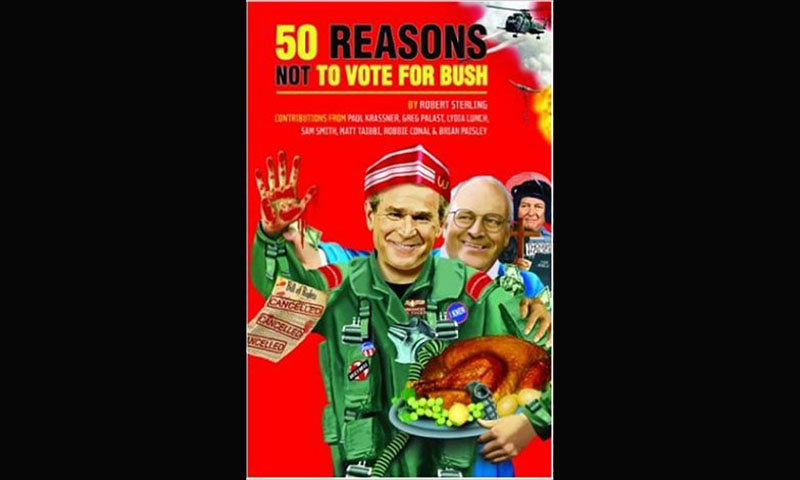 Review: 50 REASONS NOT TO VOTE FOR BUSH – ROBERT STERLING

50 REASONS NOT TO VOTE FOR BUSH
ROBERT STERLING

Anger is one way to overcome apathy. Many of us are angry about “President” George W. Bush–this book provides a good list of reasons why. While Shrub will undoubtedly finish at the top of the list of “Worst ‘Presidents Ever,” hopefully it will be after four years, not eight. While your vote may not help that much (the Electoral College is a bit of a buzzkill) it’s a way to vent some frustration and pad the popular vote, which he’ll undoubtedly lose even if he and Jeb steal Florida again. Here’re some of the 50 reasons: He stole the election. He knew about 9/11 and won’t investigate the Saudis. He lied about WMD. He screws our troops; the quagmire in Iraq is a widening gyre of death, destruction and wasted dollars. His tax cuts and other economic policies favor the wealthy. Big Brother, errrrr, Attorney General John Ashcroft, is watching you. He rapes Mother Earth. He appoints right-wingers to the courts and could appoint another Supreme Court Justice if reelected. Shrub has alienated the USA from the rest of the world. Well, that’s it. Don’t get mad: Vote. -MC Welk