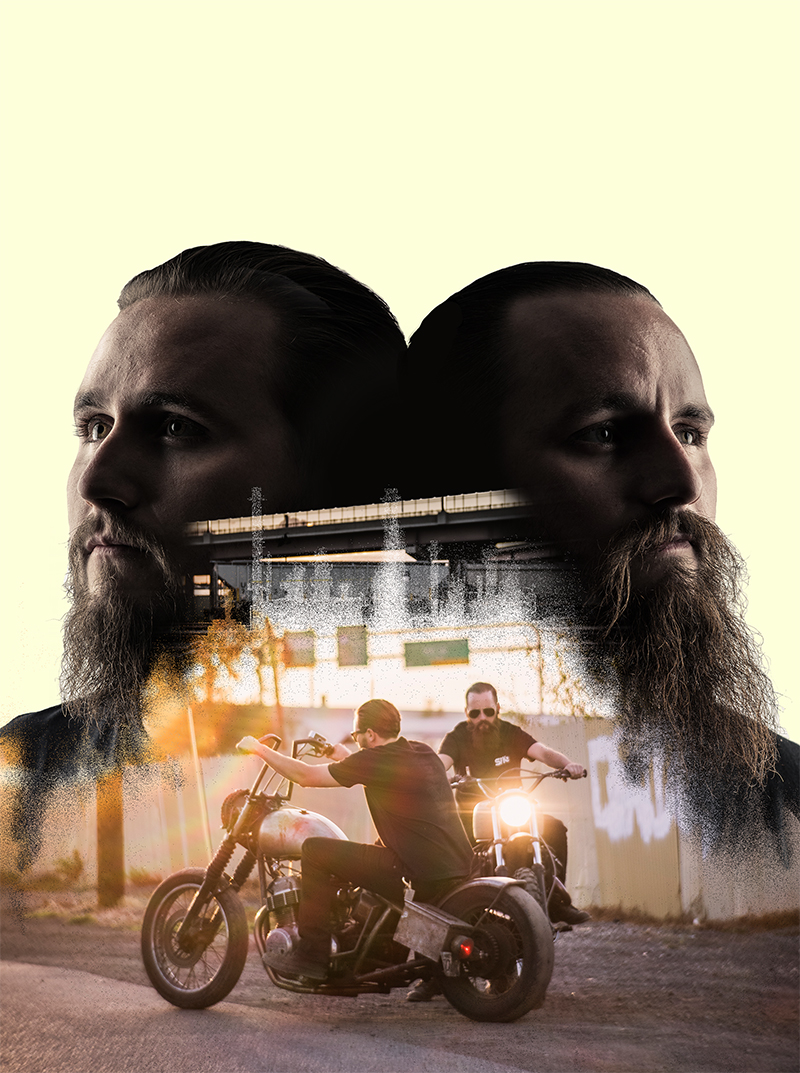 Brothers Seth and Jason “Rev” Clark love motorcycles. If it has two wheels and a motor, they’ll take it for a spin around the block and see what it has to offer. It is this passion for motorcycles that led them to open up their own custom motorcycle shop, Salt City Builds—where they welcome riders of all kinds.

“I want to talk to everybody about their bike no matter what it is,” says Seth, “because there is a reason they ride it, you know? When people come up to me and are like, ‘Is this cool?’ I’m just like, ‘Fuck yeah, it’s cool. That thing looks like fun.’”

The two started seriously wrenching on motorcycles in 2010. After customizing bikes of their own, they found that their friends would bring their bikes over to their house and ask for help working on them. They worked out of a tiny garage on the property—bikes quickly accumulated outside awaiting work. The garage was not part of their rental agreement, but they offered to clean it out in exchange for its use. “We just threw everything away,” says Rev. There was only room to work on one bike at a time, and they didn’t intend on starting a business at first. “We didn’t realize that was what we were doing,” says Seth. “There was a snowball effect—we couldn’t stop it.

Rev says, “There wasn’t really a big decision like, ‘Hey, let’s start building custom motorcycles.’ It just kinda happened.” In 2013, they faced eviction after years of building bikes in the tiny garage and annoying neighbors with the pops and revs from exhaust pipes at 3 a.m. The brothers decided to rent a shop and make it official. “I went back and counted, and there were 35 bikes there,” says Rev. “That was all the way out to the street—all the way out to the driveway—and then even spilled into the backyard where we had all the dirt bikes.”

Their current location is in an inconspicuous business park at 2212 West Temple #17. A diminutive garage door opens up to reveal a large room filled with bikes from Harleys to Hondas, like a United Nations meeting on two wheels. A large American flag hangs on the wall above shelves of engines and handlebars. A bike sits lifted up, disemboweled with its wiring and frame showing—a halfway-finished job for a customer. Rev and Seth are professional but relaxed. Talking about potential jobs with them seems more like talking to a friend than walking into a business, though they take their work seriously. “Keeping customers happy is paramount, and doing it right the first time,” says Rev. They do a wide variety of work, and if they can’t do it, they probably know someone who can. They recently completed a Honda XR650 dirt bike project with a chrome tank that looks more like a street bike but still has off-road capability. Another one of their builds can often be seen in the front window of local clothing store The Stockist.

They admit that owning their own motorcycle shop hasn’t always been the plan. “Before we started this, I was a hematologist at the Red Cross,” says Rev. “I’m two classes away from a degree in biology at the U.” Before opening Salt City Builds, Seth spent his time working on cars, improving them and then flipping them for a little cash. This was how he got the money for his first bike. “I saw this CB750 on KSL—it didn’t run—and went out and bought it,” says Seth. “After a week of working on that, I decided I didn’t want to work on cars anymore.”

They try to balance running a business while remaining friends with many of their customers, offering free advice or occasional help on little things. “It is nice because we have a lot of really good friends that understand that this is our way of life,” says Seth. Rev clarifies that it’s “not just people who don’t have a problem paying a homie to work on his bike, but also people who are more than willing at any time to help us out,” he says. The Clarks admit that they are newer to the scene than many other shops, including Dirty Rat Moto Cyco, Pangea Speed, Lekka Cycles and SFK—all of which they say they look up to in various ways. “When I first got my bike, I saw Trent Sanders’ [Lekka Cycles] CB750 that he had built, and I thought that was the coolest bike I had ever seen,” says Seth. “I still think it is fucking sweet.”

In conjunction with local women riders group The Litas, they have hosted many weekend rides called Sunday Mass, wherein riders gather at the shop and then ride together to a predetermined location. Over the past year and a half, more and more riders, both men and women, have shown up to the group rides held at the shop, some riding Harleys and others European and Japanese bikes. The rides are not limited to any type of motorcycle, and the Clark brothers encourage anyone to attend who wants to have a good time and make new friends. “We want more than one type of bike there,” says Rev.

Salt City Builds also co-organized two major events in the past year with the help of local rider Juan Coles. The first was a rally near the Colorado River in Moab, replete with giant bonfires, BBQ and giveaways from national motorcycle sponsors. Motos in Moab, as they called it, attracted not only Utahns but also many from other states, which further established SCB as more than a local name and helped further spotlight Utah on the national scene for its vibrant community of passionate riders. The second was a motorcycle/art show called Salty Bike Revival, which featured painted tanks and helmets from local artists, photographic prints and live music as well as a bevy of customized bikes of all kinds—over 6,000 people attended.

Looking back, they say that this next-level enthusiasm really kicked off when they hosted the SCB Custom Bike Show and Swap Meet at Miller Motorsports Park on Aug. 31, 2014. “That was when we had a really good indication of how many people were actually listening to what we were saying,” says Rev, “as well as how many people really didn’t give a shit what kind of bike we were riding. A sport bike won that show. We would have had a riot if it was a chopper show, but it wasn’t a chopper show: It was a motorcycle show.”

The Clark brothers seem to possess an abundance mentality—the idea that there is enough room for everyone. After group rides, Rev and Seth can be seen behind the grill they keep at their shop, cooking up hot dogs and burgers for anyone who bothers showing up, even if their face is unfamiliar. They never ask for others to pitch in, except in slipping $20 in the hand of a friend and asking them to run out for more food. “When it really comes down to it, we are constantly broke because we are putting everything into the business—and all of our time,” says Rev. “I work 12-hour days on average, especially in the first year. We didn’t even realize it because we are working for ourselves.” When people begin leaving any event or ride, it is uncommon for them to get away without a bear hug from Rev, even if they haven’t known him for very long. This is a far cry from the image many people have of motorcyclists.

They hope that they can support the trend of people in Salt Lake City getting excited about riding motorcycles together—instead of gathering in tribes defined by riding bobbers or café racers, European bikes or American. “The response from the community is probably the best in the world right now,” says Rev, “as far as people in the motorcycle scene and people who are excited about what is happening in Salt Lake City. So if we could be on the cutting edge—that is where we are going. We are going to keep going where we’re going.”