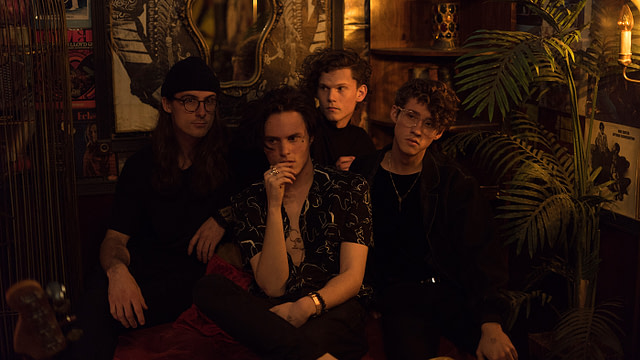 Jaxon Garrick is front man, producer and guitar player for Ivouries. Along with Devin Mitchell, Casey Schrader and Adam Fuller, he creates what Garrick describes as “forward-thinking pop music.” As a genre, Garrick explains that he appreciates “the vagueness of pop music …there’s an art to it that I think is under appreciated a little bit.” He goes on to say that good pop music should be relatable for the listeners: “I truly believe that everybody, to an extent, knows when something is honest … people have a second sense for something that feels real.”

Garrick started with music in his mom’s basement. For a while, he was too uncertain to sing. When he finally took a chance on himself, the result brought him to tears. “I was so happy that, like, I could do it all on my own and I could express myself the way I wanted to express myself,” he says. From that moment, he started Ivouries and began to bring other talented artists alongside him.

In 2020, producing opportunities caused him to temporarily step away from the band and his own music. Compounded with the other challenges of that year, he found himself having a bit of an identity crisis. “It hasn’t been until recently that I’ve felt like myself again. That I’ve felt confident enough to put out music,” Garrick says. He lost his way, caught up in production successes that he thought were more important. Depressed and unsure, he finally realized that music would save him: “It’s very therapeutic for me,” he says. As a producer, he explains that he never stuck up for himself and what he thought was good, often overworking himself in search of results. But now he knows this actually made him worse: “I don’t think great producers are people pleasers; I think they are allies to artists. They’re good channelers of [the artist’s] emotion, but still bring themselves.” This discovery and movement toward healing has opened the door for him to be a more honest artist. Now, his music is for him, and no one else.

You can listen to Ivourie’s single “F!” in this episode of SLUG Soundwaves and find all their songs anywhere you stream music. Follow the band on Instagram and Tiktok @Ivouries to keep up with their latest releases and events.