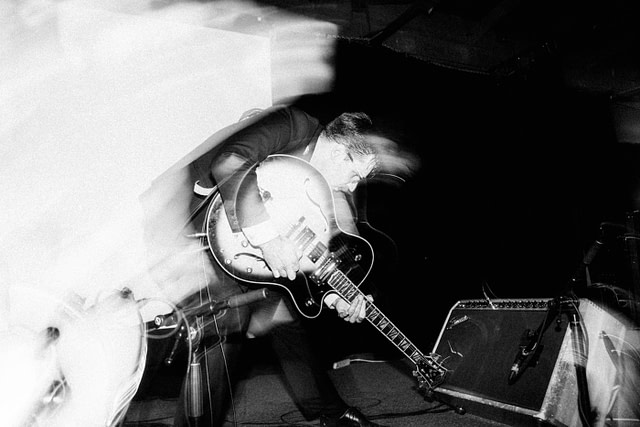 Jacob T. Skeen is a monoband out of Salt Lake City. He explains, “being a monoband means I’m a solo performer but I have just as much equipment as probably a full band.” In his work, Skeen plays around with drums, guitar, harmonica and noise microphones among other instruments, figuring out tricks to layer sounds and simulate the full-band experience. His music, while moving toward a more aggressive sound lately, is influenced by all the music he enjoys, “whether it be gospel, blues, garage, punk, psychedelic, heavy metal,” he says. He goes on, “A lot of my influences come from my culture and upbringing … I’m very attracted to anything that comes out of Utah or Salt Lake City.”

When writing, he is interested in religious references, sounds and symbols. Throughout his full album, Death, Thou Shalt Die, he especially focused on these themes found  scattered all throughout Salt Lake City. “I definitely use symbols, specifically the ‘morning star’ symbol. It’s all over the head of the kick drum that I use … The star I use is the one that’s over State Street.” Having started collecting random religious records from SLC thrift stores, Skeen wanted to model Death, Thou Shalt Die in a similar fashion. “In the layout and the theme, I wanted, when you pick it up, for it to look like a terrible gospel record that you pick up from the thrift store,” he says.

Focused on making each copy of the record personal and handmade, each detail is intentional, with stickers on the front, handwritten notes on the inner sleeve and ‘hymnals’ which function as a glossary of the lyrics’ religious references. “It’s definitely DIY, it’s definitely homemade and it’s got plenty of mistakes on it that I found after it was pressed … so it all kind of fits in. Like, there’s a spelling error on the back [and] I realized after I recorded songs that I had sung some of the lyrics wrong,” he says, happy with how it ended up fitting his vision even more than he planned.

For SLUG’s Death By Salt VI tape, Skeen recorded a new song titled “Come Home,” where he explored new musical elements like drum machines, fuzz pedals and experimental feedback. Check out his record on Bandcamp, follow him on social media @jacob_t_skeen to see what’s new and catch him live at the upcoming Treefort Music Fest in Boise!