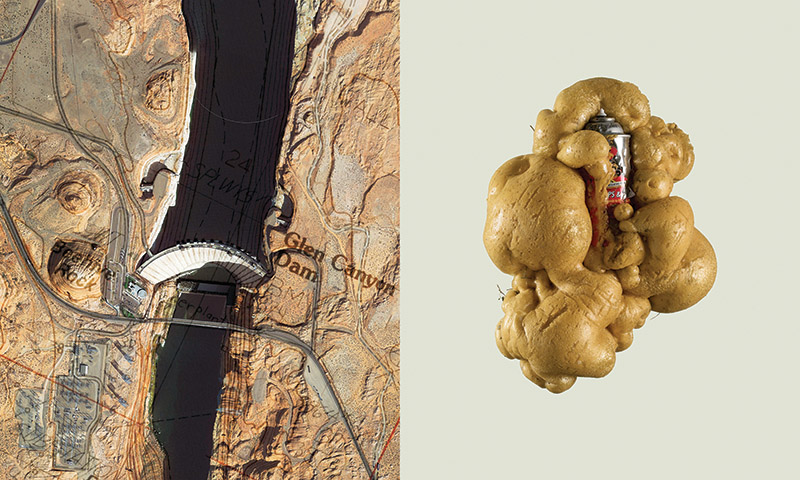 Creating a boundary is a powerful method of solidifying the definition of something as its own whole. Boundaries encapsulate, separate and clearly define the end of one thing and the beginning of another. In the Utah art scene, like in any region, boundaries exist. And like in any other circumstance, these lines that exist concurrently within the scene can produce both positives and negatives. The DE | MARCATION portfolio is a snapshot of what that looks like today within Utah art photography, all while combating boundaries that exist as walls.

“There are physical boundaries, in the sense that I think artists have a difficult time promoting and getting their work across state lines. It is easy to stay inside our own system, our own bubble, so I wanted to break down that boundary,” says Amy Jorgensen, Executive Director and Chief Curator at Granary Arts, Head of Photography and Associate Professor of Visual Art at Snow College and Co-Creator of the photography portfolio DE | MARCATION. “It’s also the conceptual boundaries that we have. What are the traditions of photography in the West? How is it going to work breaking those traditions and really reach beyond what we are accustomed to?”

The word “demarcation” means to fix the boundaries or limits to something. This is a perfectly fitting title, considering the mission Jorgensen has in mind with this project: To expand the audience and encapsulate what art photography exists now in Utah. Although, Jorgensen says, “DE | MARCATION came later—the title was the hardest thing. The title has to capture the essence of what you are trying to accomplish. All of those goals were rooted from the beginning of the project.”

“It is easy to stay inside our own system, our own bubble, so I wanted to break down that boundary.”

DE | MARCATION had its genesis in the archive section of the Center of Creative Photography in Tucson, Arizona. Jorgensen discovered similar portfolios from the 1970s, which sparked the desire to bring this concept to Utah. As Jorgensen starting developing the concept of the portfolio, she brought in Edward Bateman, Head of the Photography and Digital Imaging area and Associate Professor in the Department of Art & Art History at the University of Utah, to help collect the right photographers to highlight in the portfolio. “I’ve participated in a lot of printmaking portfolios—I knew exactly what Amy was talking about and how portfolios build communities among artists,” says Bateman. “I knew that it would be a huge amount of work … but also that this was an important project.”

Now that the vision was in place, there were multiple goals that needed to be met to manifest this project into reality. One of them was the funding for DE | MARCATION. Soon after Jorgensen’s visit to Tucson in 2016, UMFA pre-purchased the portfolio. It was this milestone—and the generous financial support DE | MARCATION received along the way—that allowed the groundwork to begin, including the design and curation of the portfolio.

“We wanted this object that moved conversations forward, looking to the future. We wanted a design of a box that was very contemporary.”

When looking for artists, Bateman and Jorgensen initially wanted photographers to apply but quickly realized this wasn’t the best way to find the appropriate photographers. “We interviewed and met with many of the artists and debated for months and months on who to include,” says Bateman. That’s when they tapped into their network and contacts, and searched for artists who were dedicated to their practice. They also kept an eye out on a spectrum of makers—people from younger and older generations. The 20 photographers who are officially featured are: Kimberly Anderson, Christine Baczek, David Baddley, Edward Bateman, David Brothers, Van Chu, Samuel Davis, Daniel George, Haynes Goodsell, Mark Hedengren, Amy Jorgensen, Natalie Kirk, Karalee Kuchar, Carsten Meier, Bernard C. Meyers, Andrew Patteson, Kim Raff, Nancy E. Rivera, Fazilat Soukhakian and Josh Winegar. The work of photographers Carsten Meier, Daniel George, Kim Raff, Natalie Kirk and Samuel Davies are highlighted in this piece, as many of the other photographers have already been featured in past issues of SLUG.

Of the final project Jorgensen says, “The specific design of this box was a collaboration with myself, Ed and the amazing staff at Red Butte Press (Emily Tipps, Marnie Powers-Torrey, Crane Giamo). We sat down in their studio, and they listened to what the goals of the project were and what would be important to communicate—which was that we wanted this object that moved conversations forward, looking to the future. We wanted a design of a box that was very contemporary.” This concept was successfully executed with details like the slim and sleek presentation—the edges don’t hang over the sides, the corners are slightly beveled, and everything fits together perfectly. “We look at hundreds of swatches of color—we wanted something that grabbed your visual attention, there is a lot of red in Utah, politically and in the landscape. There is a gold inset and when you slant it, it turns gold and blue.”

“You have to look at any multi-year collaborative art project as a labor of love.”

In November of 2018, the design work, curation and vision to support the artists of Utah was complete, and DE | MARCATION was ready for its debut. “From the beginning, you have to look at any multi-year collaborative art project as a labor of love because it will take more time, energy and money that you will ever imagine,” says Bateman. The love for the project and what the project represents is deeply saturated in every crevice of the object, from the fine detail in design to the love each photographer poured into the creation of every image. Jorgensen made good on her inspiration when looking through those archived portfolios back in 2016, and approached this project from a place of love and pride for Utah and the artists whose work lives within its boundaries.

DE | MARCATION currently resides at Granary Arts at 86 N. Main St. in Ephraim, Utah, and will be up until Sept. 27, with plans to move to the UMFA in the Fall.