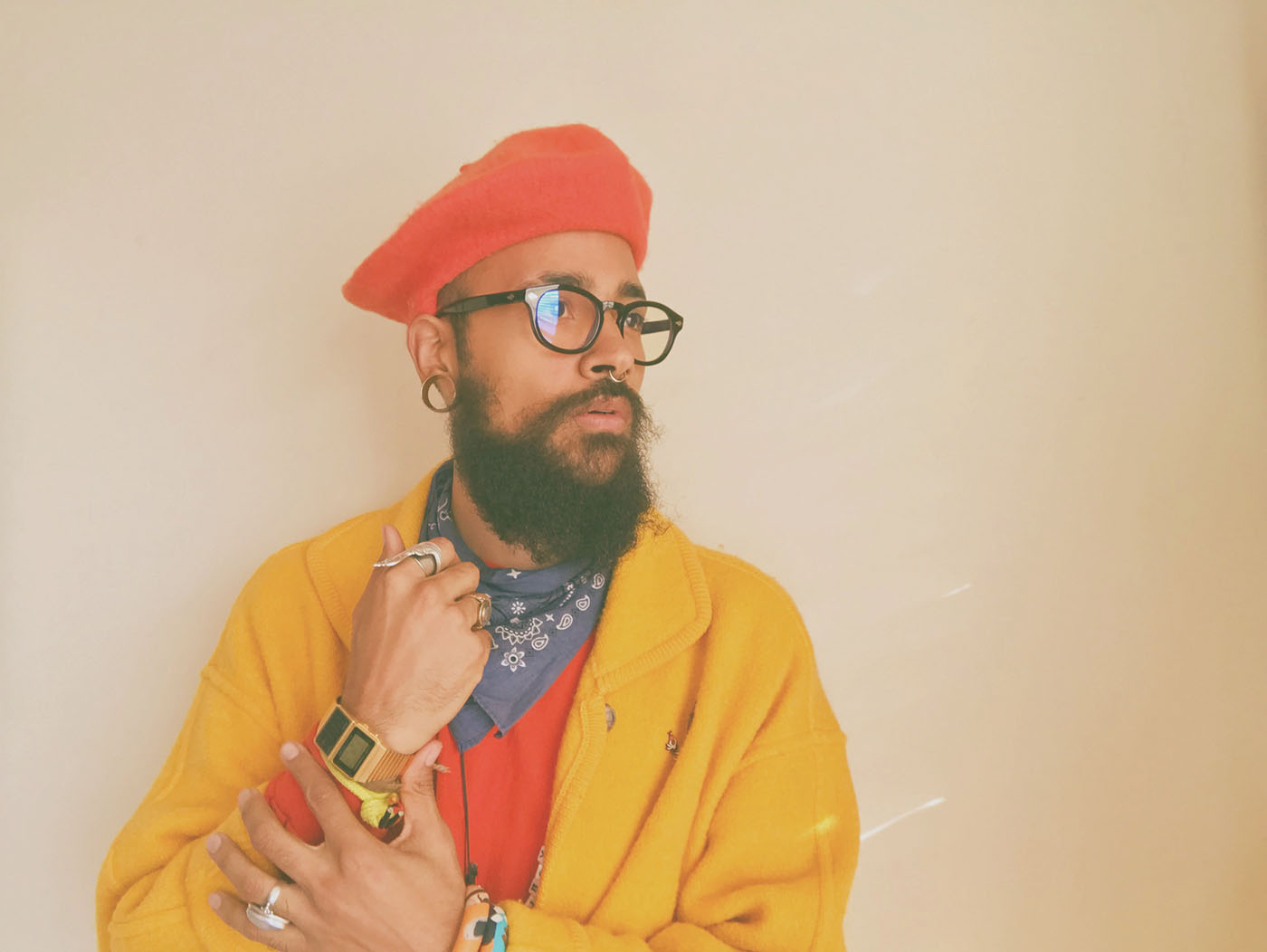 In the eyes of artist, business owner and the creator of SLUG’s Craft Lake City Virtual DIY Fest issue cover, Abraham Von August, life should be boundless. For far too long, the tiresome constraints of binary categories have shaped the way humans express themselves, binding us into ways of thinking, acting and dressing. But on the other side of classification and marking lies a colorful world where authenticity awaits ripe for picking. This is where August finds inspiration to create unique visual art and curate one-of-a-kind vintage looks for their brand, Trashpaca.

Since childhood, August has surrounded themself with the avant-garde influences of art-house cinema and the eccentric personalities within. Naming directors such as Wes Anderson, Hayao Miyazaki and Spike Lee, August says they are drawn to “their way of creating oddball characters with these strange little idiosyncrasies.” The ability to manifest eccentricity is something August centralizes in all of their artistic endeavors, including hand-crafted journals, whimsical illustrations and even jewelry made with human teeth.

As an illustrator, August describes their style as dreamy and nostalgic, creating drawings that evoke a sense of the past while playing with elements of fantasy. “I like for my art to feel a bit like something from a kid’s fairytale book cover, but it’s not just for kids. It stimulates a part of the childlike mind,” they say. Much like the quirky characters within August’s favorite films, each illustration is given its own unique attributes. It’s a charming aspect of their work that lends a part of themself to each piece of art they create.

For instance, the whimsical design on SLUG’s August cover has been given its own imaginative identity. August describes the character they have named Etheline Amaranth: “[They] eat food based on what color they’re craving for the day, thinks beaches are ‘overrated’ and would definitely eat a waffle every morning for breakfast if they didn’t believe sleep was actually way better than breakfast,” August says. Relatable, Ethaline, very relatable!

“I like for my art to feel a bit like something from a kid’s fairytale book cover.”

Etheline has been brought to life by August’s innovative mind, but the illustration also captures the essence of Salt Lake’s flourishing DIY community—a scene that has been a powerful influence in their creative journey. “What I think I was wanting was to really capture the overall feeling and emotion that I experienced the first time that I visited a Craft Lake City [Festival],” they say. After attending their first CLC DIY Festival, August left feeling inspired and renewed, and in 2014, they became an official vendor. In those first few years, they focused on selling unique pieces such as hand-painted necklaces and witchy grimoires. After experiencing success and discovering a welcoming community, August decided to risk it all and pivot their interests toward their love of vintage fashion.

August’s passion for clothing from the past stems from the same cinematic influences that inspire their visual art. “I think fashion has always been a way for me to connect with a lot of my favorite characters in these stories, films and even video games,” they say. In the eyes of August, movie makers are magicians whose powers lie in the costumes in which they adorn their characters. And much like the wardrobes found on movie sets, vintage clothing exudes personality and mystery. August uses the enchanted clothing to embody the characters they admire on the screen, but they also believe it can be used as a powerful means of expression. “I really wanted to start speaking MY personal language through my clothing, and I wanted that language to scream nothing more than ‘ART!’” August says.

After embracing vintage clothing’s ability to bring authentic expression into their life, August realized they wanted to share that gift with others. In 2016, August launched their very own curated vintage brand: Trashpaca. The origin of the brand’s name is just as interesting as it sounds. “I liked the idea of something a little gross mixed with something a little beautiful,” August says. “I love alpaca, like, A LOT. They’re majestic creatures that are just sort of naturally stylish and beautiful, so I thought, ‘that’s my little something beautiful.’”

Much like the wardrobes found on movie sets, vintage clothing exudes personality and mystery.

As for the less glamorous portion of the name, August believes it’s all a matter of perspective.“A lot of the things that we have been taught [are] ‘trash’ [are] more of a matter of conditioning and perspective,” they say. “They serve kind of an important purpose and a lot of them are clad in fancy and odd colors. They sort of just hide in plain sight while still being kind of cute in a gross way.” Selling discarded clothing is August’s way of redefining what “trash” really is, and showing others the many ways we define what it means to be beautiful.

Not only is Trashpaca providing an eco-friendly alternative to fast fashion, but it also focuses a non-gendered and fluidly sized approach to clothing. “I wanted to really create a shopping experience that was closer to what I was looking for when I was out shopping for clothing. I don’t shop by gender or age or size so much—I shop reactively,” says August. As a nonbinary person themself, August saw a gap in Utah’s vintage community and an opportunity to shake up the fashion narrative. “I think if we can start to blur that bar of gender in clothing, then maybe we will see people not be so scared to express themselves a little more,” they say.

Stepping outside the limits of gender allows people to express their true authenticity, but it also makes fashion a hell of a lot more fun! August loves to create standout outfits from an unlikely pair of vintage pieces, and finds even more joy sharing their origin stories. “It’s such a sweet moment for me when I’m like, ‘Oh, this is a vintage Victoria’s Secret robe and these pants are just capris from an old lady!’” August says. When it comes to fashion, Trashpaca’s philosophy boils down to this: If you like it, and it’s comfortable, then wear it!

“I don’t shop by gender or age or size so much—I shop reactively.”

As life and fashion evolve, so will Trashpaca, and August has big plans for the brand’s future. “I would like to eventually have Trashpaca be a sort of artsy boutique. It would include things [so] that you can decorate not only yourself, but also your space!” August says. People are partially defined by what they like—the things they surround themselves with and the items that hold meaning to them. August wants to help others curate their lifestyle as much as they do their clothing: “I would like to be able to help people live a curated life, as well. A life full of choices that they have made with purpose,” they say. August also hopes to incorporate more visual art into clothing sold by Trashpaca by making screen-printed totes, hats and T-shirts, as well as individually hand-painted items.

Seen through August’s stylish lenses, the world is full of hidden treasures—shiny pieces of debris that go unnoticed by the average eye trained to see only black and white. As August illustrates fantastic characters and pioneers fashion without labels, they make Salt Lake a more inclusive and interesting place. It’s people like August who remind us that the cycle of life is eternal, and that things once discarded can be reborn and loved over again.

Keep up with Abraham Von August and find more of their illustrations on Instagram @abrahamvonwaffles. Check out Trashpaca’s ever-growing vintage collection at etsy.com/shop/trashpaca and follow them on Instagram @trashpaca.